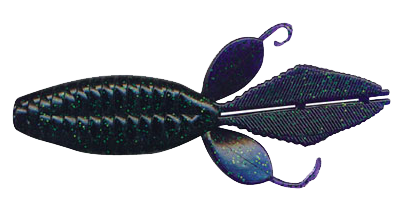 This season we’re going to get with pros and follow the top level tournaments to find out what the hot baits were on each venue by the top anglers. We’ll still put up press releases from the tournaments, but the following week we’re going to delve more into the baits that put the fish in the boat for the top pros.

The FLW Tour Open on Okeechobee was a soft bait super punch out to say the least. The top five finishers caught the majority of their fish on four compact soft baits, Texas rigged on heavy tackle. Two of the top five used the same bait. Four of the top five used baits from two companies. At least one of the anglers used a bait they helped design.

Brandon McMillan won the tournament with an amazing 106 pounds and 10 ounces. He opted to flip when the majority of the top 10 finishers were sight fishing. His bait of choice was from a small manufacuter called Bruiser Baits. The bait is called an Intruder. It’s a small spade style bait that has several tentacles coming off of it. The profile makes it slip through matted grass easily but the slender appendages give the bait a unique profile and subtle action in the water. His color choice was Junebug. His backup bait was a Gambler BB Cricket. But the majority of his fish came on the Bruiser Baits Intruder.

Randall Tharp was second with 102 pounds, 2 ounces. He also opted to flip for his bass and he used the new Attraxx Mystic Bug to land his bass. His fish were buried up in the thickest mats he could find and the slimy nature of these soft baits when wet as well as the the compact but weighted density of the plastic enabled it to slip right into those dark canopies under the mats.

Chad Prough led the event for three days before finally succumbing to the pressure in his area. But for the first two days he used the Bruiser Intruder to whack 30-plus-pound limits of bedding bass in one small area that he shared with another top-10 competitor Fred Roumbanis. Prough was able to coax bedding bass into biting with the unique profile and appendages on the Intruder.

Terry Scroggins had a great tournament and also caught the biggest bass of the event — a 12-pound, 2-ounce giant on Sunday. He could have made a run at the top 10, but the three big bass he found Saturday were not still there on Sunday. His weapon of choice for the shallow grass and bedding bass was a Yum Money Craw in the molting color. He would actually locate fish with a big Smithwick Devil’s Horse and then pitch the Money Craw on their beds to seal the deal. The great pincher action of the Money Craw give it great displacement when hopped up and down rapidly under a mat or over a stalk of grass and its narrow profile also helps get it through tight cover. 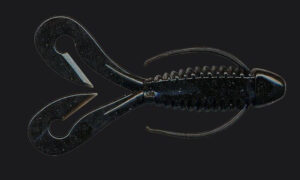 Jacob Powroznik said before the tournament started on Thursday morning that he had found some good spawning fish and he was going to whack them. The man was true to his word. He whacked 95 pounds of bass from their spawning beds in four days on the Big O.

His bait of choice was his own creation. He designed a new bait for Attraxx called the Jacobug that’s just coming to market now. The bait features a flattened profile, ribbed sides, two unique antennae, and two unique blade cut inward facing craw legs that gives the bait a bunch of action while keeping the profile compact. It was a great bedding bait, will be a   great flipping bait and probably will catch a bunch of bass at a jig trailer or Carolina rig offering.

All four baits were a generally small compact craw profile. Colors varied from junebug, black and blue and even a tanish red.

Whether they   were flipped or pitched to beds and shook in place, each bait offers a little something different than what the fish have been used to seeing. That lends itself to getting bites quicker when the bass haven’t already been educated by a certain specific profile, shape or color.

This was a great testing ground for these compact soft baits and we’re anxious to see how they do on other venues throughout the year.