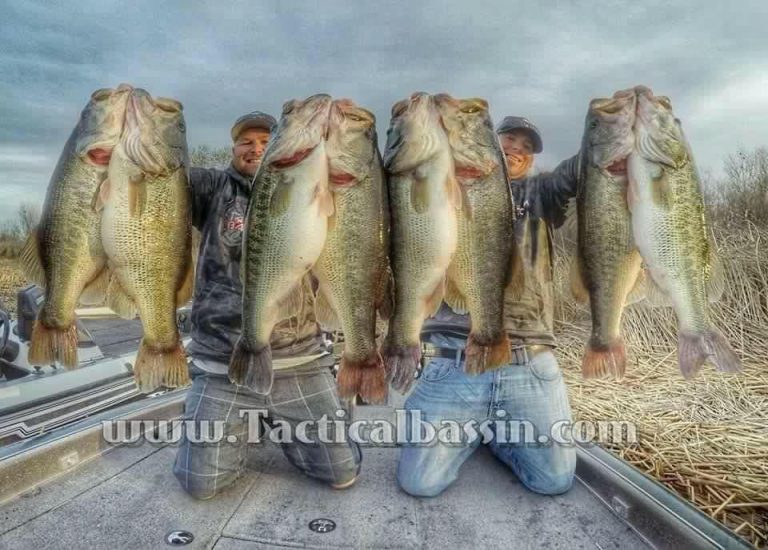 Pictures are hard to deny. Videos harder yet. The apparent big bass parade coming out of Clear Lake in California is even harder yet. We ranked Clear Lake as the 4th best Largemouth Bass Lake in the country in 2015. But what we’re seeing already this winter and spring, it might be the best big bass lake in the whole country, if not the world right now.

We saw this picture of west coast anglers Matt Allen and Tim Little of TacticalBassin.com last week. It’s 8 of the 10 bass they caught that weighed more than 80 pounds. More than an 8-pound average per bass, so they were only able to hold up 8 of the bass for their photo.

We chatted with Matt Allen (bassinguide.com) who operates his guide business much of the time on Clear Lake. He has put a bunch of clients on 30-pound limits this year already. But when Allen and Little (who holds the spotted bass record) get together than can turn 30-pound limits into 40-pound limits.

“This lake is hands down the best in the nation at the moment,” Allen said. “The number of clients sticking 30-plus-pound limits is staggering! When Tim and I get together and work together, they become 40-pound limits. The bait fish are booming, and the bass are so dense; it’s shocking. I can’t tell you how many 5-pounders I’ve lipped that end up being 7-pounders when I put them on the scale. It’s really amazing!”

Clear Lake is definitely on our bucket list before this boom is over. Allen and Little ripped these massive double 40-pound limits on River2Sea Ruckus lipless crankbaits and JSJ Hitch Swimbaits.