Mangroves and Florida redfish — that’s nothing new. However, we’re not talking about the perimeter work common to most spot-tail chasers. Rather, an up-close-and-personal approach based on the time-honored bass fishing technique of pitching can deliver big results when reds ride the tides into gnarly cover.

Pitching sends lots of jigs and Texas-rigged creature baits into various freshwater wood and vegetation cover, so why not repurpose this presentation for the redfish that leverage high water to forage on the bounty of crabs, shrimp, snails and baitfish they find amid the tangles of emergent mangrove roots?

WHY PITCHING & FLIPPING WORKS FOR REDFISH

Capt. Mark Dillingham guides the mangrove-laden waters of west central Florida waters from Tarpon Springs to Port Richey. He catches a lot of redfish by corking sardines around mangrove edges on lower tides, but when the sea ushers predators into the roots, targeted presentations serve strategic benefit.

“By pitching artificials up under the mangroves, you can reach further up under the bushes and you can keep your bait in there for a longer period of time by working your bait out with a slow twitching movement,” Dillingham said. “This will allow you to present your bait deep inside the mangroves where the fish will go on the higher tides.

“I control the amount of time the bait is in the area more so than a live bait which would swim out of the cover.”

“Most people are intimidated by this habitat. When water gets high in these mangrove roots, most people bail and go elsewhere.”

Understandable, for sure. With barnacles and oysters encrusting mangrove roots, this is no place for the wimpy trout tackle of open flats.

But, those armed with baitcasting gear or medium-heavy spinning gear spooled with 50- to 80-pound braid capped with two to three feet of 40-pound fluorocarbon leader will enjoy stellar opportunity in pristine habitat — often with little or no company. 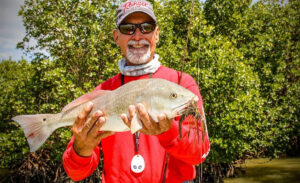 WHAT TO LOOK FOR WHEN PITCHING REDS

Water Level: Redfish — along with snook, small tarpon and black drum — need sufficient depth to wriggle through the mangrove maze, so look for the show to take place from about midway into the rising tide to midway through the outgoing.

Fish are eager to feed on the rise and desperate to maximize rapidly dwindling opportunity on the fall, so expect your most intense bites on both ends of the cycle.

“Falling tide can be outstanding because it concentrates the fish on the edge,” Van Horn said.

Loners: Isolated trees, or small clumps of mangroves usually indicate a hump or bar. Contour changes create ambush points, so check each of these sweet spots you pass.

Inlets: Dense mangrove swamps often hold hidden lagoons you’ll never reach, but there’s always a creek or drain by which fish access these inner sanctums. These portals are always worth a few pitches — even a couple casts to the center — but finding one on the falling tide can deliver a frantic flurry as reds are snapping up any meal they find on their way out the door.

Blowdowns: As with bass fishing, fallen trees create additional cover and feeding sites for redfish. Work the branches and the trunk, with particular focus on the downcurrent (ambush) side.

Peripheral Activity: When looking for a starting spot, keep watch for mullet leaping around the mangrove edges. These vegetarians often host redfish that hide in their schools; and when the tide’s right, the copper predators will break off and hit the roots.

Also, busts, boils and any type of obvious predation from redfish, snook, sharks, tarpon or jacks indicates a food-rich area. Once the tide opens the mangrove buffet, reds will transition from baitfish to crustaceans. 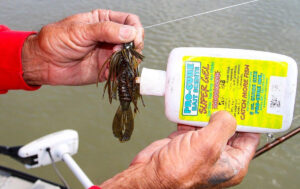 Preferring a compact, quiet profile that he can sneak into a relatively small area, Dillingham pitches mangroves with a 1/4-ounce jig head with a streamlined Exude Dart. This package allows for a hopping or swimming action, so he can mimic crustaceans and the baitfish that also pass through the mangrove roots.

Baits with active appendages attract maximum attention, especially in turbid water, so Van Horn fits his jig with a Strike King Rage Crab or Rage Bug. (With the latter, he separates the tail flappers for maximum motion).

In particularly tight areas, Van Horn switches to a Strike King Slither Rig (weight with built-in skirt) and a Rage Bug on a 4/0 Strike King Hack Attack flipping hook. Here, and with the jig, he coats the bait and skirt with crab-scented Procure attractant.

With either package, Van Horn’s trying to imitate a crab. His theory: Reds know how bad those pincers hurt when they find a wayward lip. Therefore, the standard approach yields tremendous strikes.

“When I use a crab imitation over a shrimp imitation, the difference is astounding,” Van Horn said. “Buddy, they smack a crab. I think they’re trying to immobilize it so they don’t get pinched. It’s a resounding thump.”

On the strike, it’s all about brute force. Separating a big red from heavy cover is no easy task.

But isn’t that the thrill of fishing? 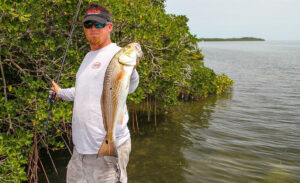