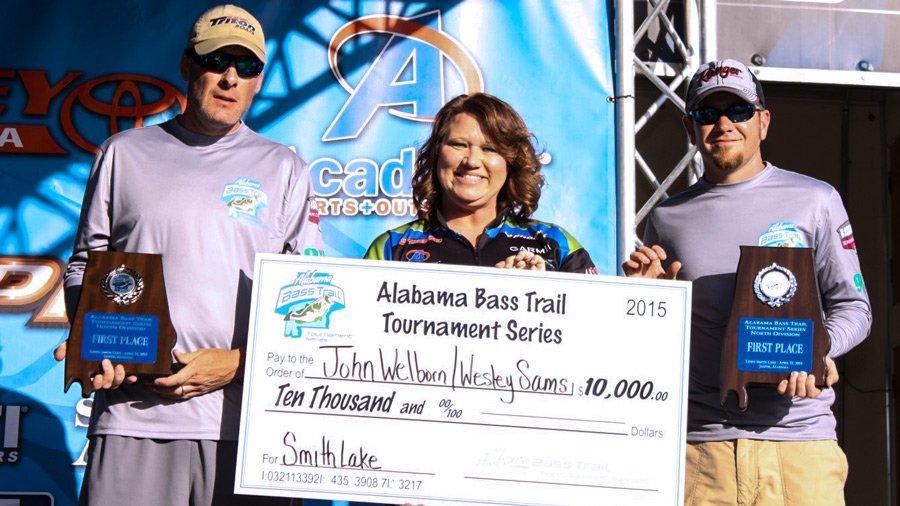 The team of John Welborn and Wesley Sams did that just slightly better than the rest of the field in the 2015 Alabama Bass Trail event on Smith Lake. In what turned out to be an extremely close affair, Welborn and Sams came to the stage as one of the last teams to weigh, and managed to place five near clone spotted bass on the scales to take the win with 18.93 pounds. The pair reported moving around a lot to fill their bag.

“We covered much of the lake today running a milk run of places that spotted bass will spawn on the lake,” they said. “We targeted spawning areas as deep as 12 feet, and managed to get the kind of bites we needed to win. We knew it was going to be close, but we’re very happy with the results.”

The winning team said that they caught 50 to 75 fish throughout the day, but at nearly noon, they didn’t have much for weight. “We started getting our better bites later in the day as the sun came up better,” they reported. “We used 1/4-ounce shaky heads and 6-inch green pumpkin finesse worms to catch them; we just had to get the lure in the right places. Sanborn and Sams took home the $10,000 winner’s purse for their efforts.

For the longest time, it looked like the second place team of Brent Crow and James Morgan would be the team holding that check. They weighed their 18.65-pound limit early in the weigh-in, and stood as leaders until they were unseated by Welborn and Sams with less than 10 team left to weigh.

They reported fishing the Rock Creek area of the lake, and using the same technique as the winners.

“All of our fish were deeper spawning fish,” said Crow. “We thought we would catch only spotted bass on the shaky head, but we had a couple of good largemouth in there too. We thought we had a good chance to win, but those guys are good, and it just didn’t go our way today; we feel pretty good about second place.” They received $5,000 for their second place finish.

The team of Charlie Cummings and Greg Pugh finished third with 18.29 pounds, and earned $4,000. The team of Sam Moody and Ray Battles finished in 20th place with 15.55 pounds, but their limit included the Mountain Dew Big Bass of the tournament. Their 5.18-pound largemouth earned them an additional $500 bonus.

The top 10 in the standings were as follows below. For complete standings visit the results page at http://www.alabamabasstrail.org/tournament-series/lsl-results/ 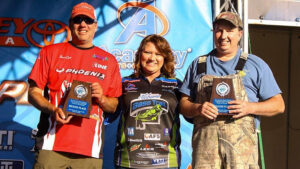