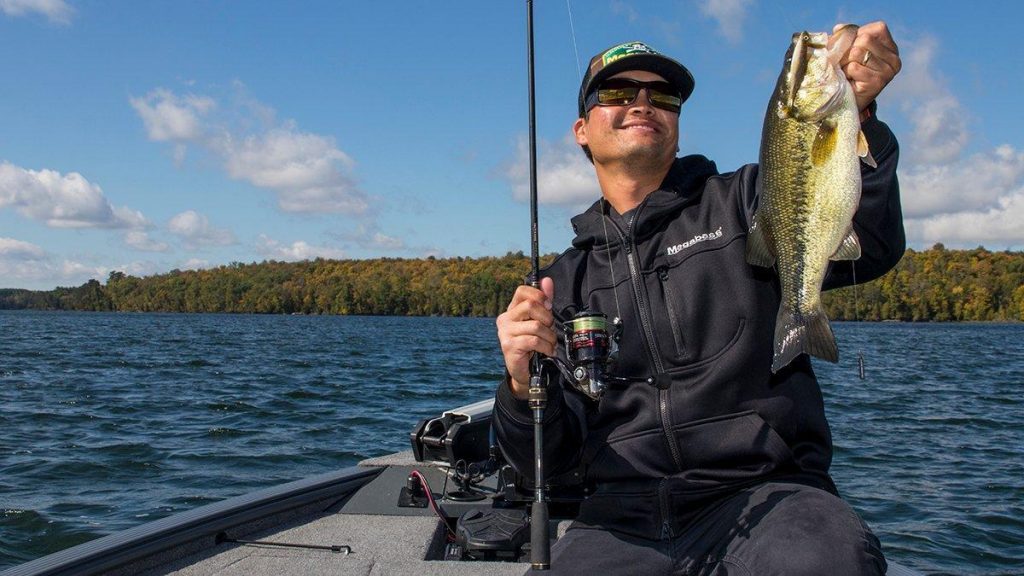 Thin, wiggly worms, soft stickbaits and little goby imitators are the workhorses of the dropshotting world, but when California pro Chris Zaldain heads north in the summertime to chase big brown bass, his number one tool on the end of his spinning rod is a small swimbait. There are times when he’ll fish them horizontally on a jig head for sight feeding smallmouth, but even when he’s “video gaming” them on a dropshot rig in a cone around or under the boat, it’s his favorite choice for catching tournament-winning limits.

“It’s a technique that I call ‘drop swimming,’ and it’s great in clean water,” Zaldain said. “Instead of dropping it straight down, I’ll make a short pitch cast, much like I normally would with a swimbait. I’ll let it hit the bottom and then slowly reel it so it ticks its way across the rocks.” 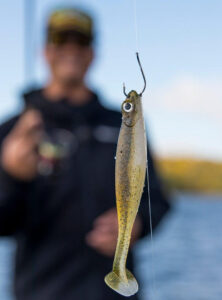 The first key to executing this strategy correctly is to use a longer than usual dropshot leader. Whereas 4 to 10 inches may be typical when fish are directly on the bottom, this technique is especially deadly on finicky suspended smallmouths, so he’ll rig it with an 18 to 20-inch leader. That leaves the lure suspended in the current, and by using a soft swimbait that moves subtly under even the slightest pressure, he can taunt non-feeding fish into biting.

He’ll use clues from his electronics to determine if this strategy is applicable. First, he wants to see groups of baitfish just up off the bottom. Ideally, they’ll be relating to isolated rock piles or distinct drops, so he can pinpoint his pitches to quickly hit a sweet spot.

“In addition to looking for clues on my graphs, I’ll look for them in my livewell, too,” he added. “Whenever I know that they’re eating anything that’s got fins, it’s my first choice.” 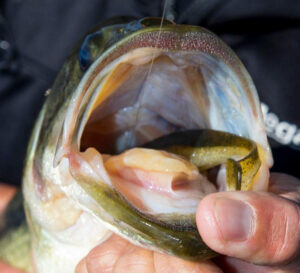 While he’s tried several small swimbaits for this technique, Zaldain – and a number of his Elite Series colleagues who preferred to stay off the record – dote on the Megabass Hazedong Shad, a 3-inch ultra-natural version with obvious eyes and a thin paddletail. “That tail is just so subtle that even the slightest movement gets it going,” Zaldain said. “I use the Spark Shad a lot too, but this one is even more subtle. It’s a true, finesse-type presentation.”

His go-to color is Green Pumpkin Shad, which has a green back and a lighter belly. “It could be a goby, a baby bluegill or even a shad. Most importantly, it works equally well when it’s cloudy or sunny.” If he determines that the smallmouths are feeding exclusively on gobies, he’ll generally switch to straight Green Pumpkin or Numa Ebi. He’ll also shorten his leader to 12 or 14 inches and fish it more vertically and with less shaking than he does when they’re eating finfish.

Zaldain’s dropshotting set-up starts with a Megabass Destroyer USA Addermine spinning rod, a 6’11” extra-fast stick that allows him to feel the most subtle bites and withstands the rocket-like power of a surging monster smallmouth. He uses 15 lb. test Seaguar Smackdown braid as his main line, and adds a length of 6 or 8 lb. test Seaguar Tatsu fluorocarbon for a leader. 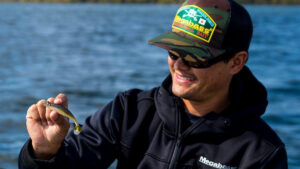 Most of the time he’ll get to the bottom with a 1/4 or 3/8-ounce teardrop-shaped tungsten dropshot weight and he’ll nose hook the 3-inch Hazedong Shad with a No. 1 Lazer Trokar Drop Shot Hook.

Prime time for this technique is when smallmouths move out to 15 feet, 20 feet or even greater depths during the heat of the northern summer, but it’s not limited to that time of year or even that type of bass. In fact, Zaldain’s second favorite time to use it is during the wintertime on fisheries that are largely or entirely composed of largemouth bass. He may need to slow down his “drop swimming” retrieve, lingering a little bit longer when he hits the meat of his target, but the effect is the same, to cover water and convince lethargic fish to expend precious energy on a meal.

“I catch a lot of fish that way at that time of year dropping it along steep bluffs and drops,” he said. “I even use the same equipment. The only adjustment that I make is that my starting color is usually Ghost Shad.” 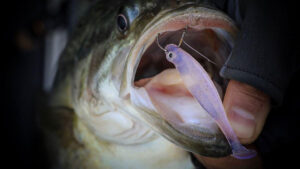 One rigging wrinkle that he employs in the winter is to use the same hook but to have both a nose-hooked Hazedong Shad and another one rigged up wacky style.

It may look a little bit unconventional, but the flailing action perfectly mimics the dying shad that are so prevalent during the coldest months. Indeed, no matter when or where you dropshot, it makes sense to have several on deck – utilizing different weights, different leader lengths and different color soft plastics – but for Zaldain the one non-negotiable factor is that a finesse swimbait (or two, or three) has to be somewhere in the mix.

Editor’s Note: This article was originally published on MegabassUSA.com. We fished and filmed this technique with Zaldain in Minnesota this fall. It was deadly on groups of largemouth and smallmouth bass that were relating to isolated rock patches on otherwise smooth-bottom lakes. But, we wanted to share it with readers that could benefit from this technique this fall and winter. 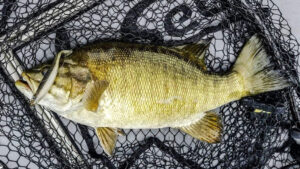