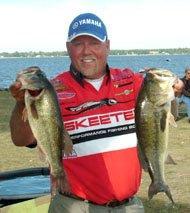 Whether Bandit Lures CEO Chris Ross is talking to potential customers or looking for pro staffers, he wants them to understand the company’s culture. It’s not about gimmicks, gizmos or gadgets. In fact, the company’s most popular bait, the Bandit 200, has been around since before Ross joined the company 17 years ago. He likes it that way. Change can be good, but change solely for the sake of change makes no sense.

Marty Stone, a relatively recent addition to the Bandit team, gets the big picture.

“I was attracted to the rich history of this company,” he said. “I’ve been fishing for a living for almost 20 years. They’ve been catching fish since I started, and they’re still catching fish.”

So if you think that the idea of “Bandit culture” is akin to “honor among thieves,” think again. It’s about taking a known entity and constantly putting a new gloss on it. When Ross took over the company it was a regional manufacturer, known in three or maybe four states. Now it’s a national force and one that produces over two hundred color patterns.

Like Stone, longtime Bandit family member Pete Ponds can attest to the tried and true nature of the Bandit lineup. He won a BASS event at Alabama’s Lake Eufaula with the Bandit 200, fishing corners and inside bends of creeks.

“That’s a great pattern this time of year,” he said. “Usually they’re on one or the other, either the inside or the outside bends.”

That’s a pattern that Matt Herren also employs in the fall on lakes throughout the south, although sometimes he’ll go to the little 100 when fish are chasing peanut-sized shad.

Stone fishes the 100 in places where he’d throw a spinnerbait or a swim jig, but he says the 200 is so effective because it hits an overlooked in-between depth.

“You throw it when the fish won’t react around cover,” he explained. “Like maybe a log where you have to make 15 flips with a jig, you can make two to four casts with the 200 and cover water more effectively.”

During a run at Wheeler about a decade ago in which he had a win and a third place finish and never finished out of the top 25, Stone caught many if not most of his fish on a 200 cranking ditches and riprap. If it hadn’t already earned a permanent place in his boat by then, that sealed the deal.

While the 100, 200 and 300 account for 90 percent of the company’s total sales — with 50% of that being the 200 alone — one relative secret in the lineup is the Flat Maxx, which Herren employs when he wants a bigger profile. While fishing the FLW Tour, he learned it’s deadly on clear, rocky impoundments like Murray and Beaver in the spring, and he whacked big bass on it at Pickwick in the fall. It’s made of the same high-quality components as the rest of the lineup.

“We use a different plastic,” Ross explained. “ABS is a lot cheaper. This is double the price. But even with our natural colors like Bream, Sun Perch and Crappie we’re still holding the price the same.”

“Everybody can afford them, and they know they’ll run true out of the package,” Ponds explained.

Ponds might seemingly stray away from the company line when he says that manufacturers are often forced to come up with new color patterns to fill SKUs, thereby confusing fishermen, but he explained that most anglers need only a few basic shades to be effective. Something that imitates a shad, something that imitates a bluegill and something in a craw pattern will cover the gamet.

At the same time, for whatever reason, certain colors outproduce others on particular bodies of water. For example, according to Ponds, color No. 22, Parrot/Orange, is the Ross Barnett bait. Despite the fact that it’s a poorly-kept secret, it continues to produce.

“A lady called up and wanted that, she said it would double your chances,” Ross recalled.

Ponds said he doesn’t know why it works, but it just flat-out catches them.

Herren agreed: “I don’t leave home without it if there’s off-colored water.”

One of Stone’s favorite patterns is one of the most unconventional, the paint job known as Black Bubblegum.

“It was designed for crappie,” he said. “But when I go down the bank with Ol’ Pinky on a cloudy, rainy day when they’re on cover, if he’s in there he can’t take it. It’s probably the first time he’s ever seen it.”

All three anglers use the splatterbacks, the basic chartreuse/black or chartreuse/rootbeer and the spring craw hues, and in reality, those may be all the average angler needs, but it’s nice to know that if you need a special pattern Bandit probably already makes it. Even if they don’t, Ross noted that about 75 percent of his innovations are suggested by customers. In other words, it doesn’t hurt to ask.

It also doesn’t hurt to carry a selection of baits that Stone described as timeless.  They’re proven when money’s on the line and every single one runs true straight out of the package. Time is money, and while Bandits don’t cost a lot, they’re worth every bit.