In the fall the bite certainly gets tougher. Then there is a period when it starts transitioning from Fall to Winter where the water temperatures continue to fall and dip into the 50s. For some reason it seems like you can catch some big bass again in this small window of transition from cool to cold.

They won the tournament last weekend, but how they won is even more fun. The emotional rollercoaster of tournament fishing can be overwhelming at times and handling that pressure is what separates consistency from luck.

The tournament on Monroe was overshadowed by an unpredictable non-typical fall bite.

“It was tough,” Schultz said. “In pre-practice, we never got on a good consistent pattern. It was really hit or miss. We caught a couple of quality fish off some points in 10-12 feet of water. We had one about 7 pounds. But when we went back on the one day practice, we never got a bite on those deeper points.”

The lake is full of stripers and hybrids and usually when they catch a hybrid in a spot, Vaal and Schultz will leave or move a bit because the bass are feeding on the same things but they won’t be right where the hybrids are. So they will generally leave when the catch something other than black bass.

So they spent some of their time hunting and pecking, boating stripers and short bass and weren’t very confident going into the tournament, but they had an ace in the hole.

“Vaal is a stick on this lake,” Schultz said.

The first day came and went with a lot of short fish but no keepers until the last hour of the tourney day.

“We had 45 minutes left, and Dustin pulled up on a steep transition bank, and he caught a nice fat 4-pounder on a Strike King Red Eye Shad. Then a few seconds later, I caught another quality keeper on a Team Supreme 50/50 Spinnerbait,” Schultz said. “That really put us in the hunt. It was a testament to never giving up. We knew the bites would come. We didn’t know if they’d be in the first five minutes or the last half hour, so we have to make every single cast count.”

The second day was more of the same with short fish all morning. At about 12:30 pm, Schultz and Vaal are getting sick to their stomachs because they hadn’t put a fish in the livewell. Vaal finally makes a gut decision.

“The pattern didn’t work in practice but it worked last fall so we have to keep trying it,” he said.

“The pattern” that would change their fate was cranking laydowns. Not really a new pattern but there is a lot more to it. Vaal pulls up on his first laydown and casts a Bomber Fat Free Shad Deep Diver to the laydown and starts worming the big crankbait through the branches. The laydown was big and extended out into 15 feet of water. As the bait cleared the big laydown, Vaal set the hook on a big bass.  The bass weighed more than 5 pounds and both anglers looked at each other and said in unison, “Allen’s Creek!”

They race to Allen’s Creek because they knew were several big laydowns were in that creek. With time escaping, they immediately went to work, boating another three keepers worming the crankbait through big deep laydowns. The crazy thing is they tried several crankbaits but the bass literally would only bite one bait, a Fat Free Shad Deep Diver in Citrus Sparkle. So after Vaal catches his fish he cuts the bait off and gives it to Schultz. Schultz gets one keeper and then it was time to go to weigh-in. If they had figured it out earlier who knows what they could have caught 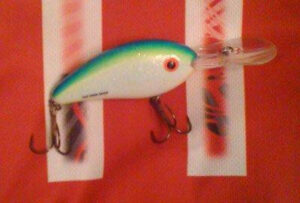 So that night they were nauseous thinking about whether they could catch a keeper before the 1 pm check-in time. The first two days, the bass didn’t bite for them until after 12:30 or 1 pm.

The race to Allen’s Creek again on the final day and Vaal goes to work again with the “lucky” crankbait. Before 9:45 he has three solid keepers and cuts his bait off and gives it to Schultz. Then Vaal picks up the net, goes to the back of the boat and sits down.

“In these FLW College Fishing events, each angler can weigh three bass,” Schultz said. “When Dustin caught his last keeper he gave me the lucky bait because it’s smarter to catch another keeper that might weigh 3 to 5 pounds than try to cull up a few ounces or even a pound.

“I fished hard for that last two and half hours, and I could not get a sniff. I don’t know if Dustin was doing something just a little different than me, but it was as nerve racking as anything I’ve ever done. “

The team came to the stage with Vaal’s three keepers and it was more than enough to blow the field away by more than 7 pounds.

“The pattern that we were on is one that takes a power style of fishing and throws a little finesse in with it,” Vaal said. “We were throwing big Bomber Fat Free Shad crankbaits in trees that went from 3-15 feet of water. The trick was fishing it extremely slow through every branch on the tree.  It was almost like jig fishing.  The best thing about it was they would smash it just like a jig.

In fact, Vaal and Schultz fished the baits perpendicular to the trees with the boat in 15 feet of water. They would crank the bait down and then when it made contact they would raise their rod tip up and pull it through the tree trying to get to every branch. The fish would bite most of the time as the crankbait cleared the last branch.

The nerves they must have felt had to be overwhelming. Not only is that a tough way to fish a deep diving crankbait, but they only had one bait that was producing between the two of them. If it gets hung in a tree at 15 feet, it was over for them.

“I’ve never fished a crankbait so slow like that before, but it works,” Schultz said. “Dustin really didn’t want to give up this pattern because he’s such a good angler on this lake and now everyone will be doing this. That Fat Free’s lip crawled over the branches every time.”

“This tournament was a wonderful experience because we were catching hawgs when it mattered and we got to share that experience with our family and friends,” Vaal said. “I would like to say thanks to everyone who supports us and GO HOOSIERS!”