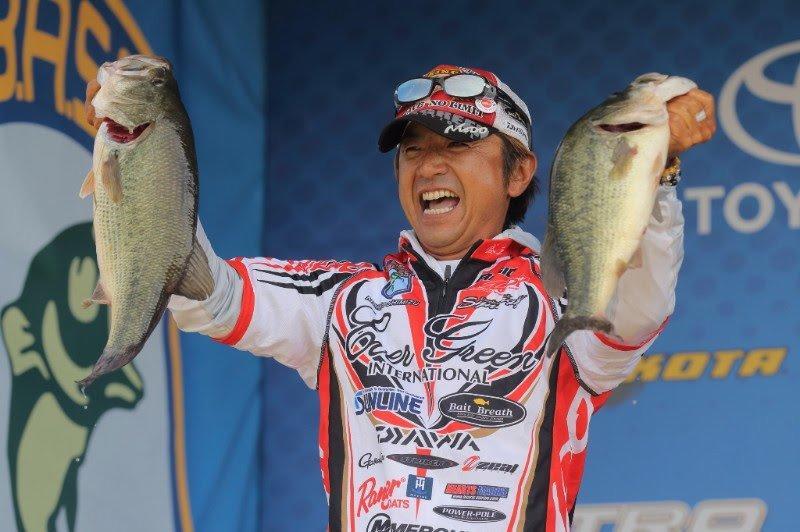 As a native of Osaka, Japan, Morizo Shimizu doesn’t speak quite as much English as the average angler on the Bassmaster Elite Series.

But he knows the words “Big Momma” very well.

That’s the nickname he uses for the size bass he likes to catch — and on Thursday, he caught five of them.

Shimizu, an 11-year veteran of the Elite Series, brought 23 pounds, 6 ounces to the scales and took the first-round lead in the Busch Beer Bassmaster Elite at Cayuga Lake. His catch was anchored by a 6-3 largemouth that he said came during the afternoon hours.

“I catch about eight fish all day,” Shimizu said in his usual broken English. “But I only catch five big ones. I caught fish early and late — all day long — from about 5 feet of water. But the biggest one came during afternoon.”

Spawning smallmouth played a role for many anglers, but Shimizu opted to fish for largemouth because the smallies he located during practice had disappeared.

“I saw some on beds, but they had gone,” he said. “I don’t know if somebody caught them or if they just left. But they weren’t there anymore.”

New Jersey pro Michael Iaconelli was second with 21-15 — and like Shimizu, he chose to concentrate mainly on largemouth.

He said two quick flurries helped him to his big limit.

“It was all timing for me,” Iaconelli said. “I’ve been fishing here long enough to know that you get them in little spurts. If you can be in the right area when they’re feeding, it happens so quickly.

Iaconelli also said luck played a role in what he termed a “magical day.”

With a big limit already in the livewell, he said he was lingering in a good area, mainly to keep other anglers away. When another competitor approached, Iaconelli picked up an unlikely lure.

“I just picked up a different lure and chunked it out away from the spot I was sitting on,” Iaconelli said. “This lure … there was no way it should have worked. But I caught a 5 1/2-pounder on it.

Because Iaconelli is targeting postspawn largemouth, he said he might have a better chance of bass moving into his areas — “replenishing” in bass jargon — than some of the pros who are zeroing in on bedding fish.

Virginia angler Jacob Powroznik went the other route Thursday, mostly sight fishing for the spawning smallies that he found during practice. He said he used a topwater bait with no hooks to locate the fish while practicing — and he was shocked by their size when he went back to the catch them.

“I didn’t actually fish for them when I was practicing. I just went over the top of them,” said Powroznik, who weighed in four smallmouth and one largemouth. “I thought they were maybe 3 or 3 1/2 pounds, but they ended up being 4 1/2-pounders.”

Powroznik said he has more fish in reserve, and he believes the conditions will be even more conducive to his kind of fishing Friday.

“It’s supposed to slick off and be really calm, so I like my chances,” he said. “I’ve still got a good many largemouth left that I know are 3 1/2- to 4-pounders. So we’ll just have to see what happens.”

EDITORS NOTE: Greg Hackney had his day one weight disqualified for fishing in an off limits area knocking him out of the lead in the Angler of the Year race and down to 4th place in AOY standings after today.