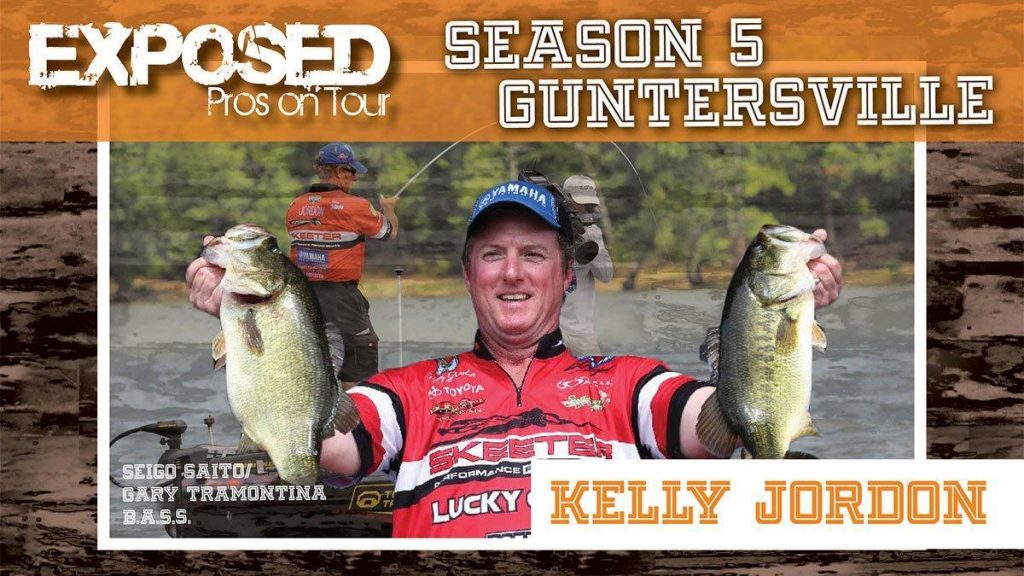 On Jan. 20, ProPatterns premiers the first episode of the fifth season of Exposed, featuring champion angler Kelly Jordon. The four-time Elite champion returns to Exposed for a second time, this time taking on Lake Guntersville.

Exposed, the one-of-a-kind behind-the-scenes reality series, follows top competitors in the sport of bass fishing as they break down competition waters during practice days leading up to tourney events on the Elite trail. As they chase top honors and position for the Classic, these champion competitors reveal the secrets that have made them the best in the sport.

Kelly Jordon first filmed with Exposed during its second season, where he took on the waters of Lake Okeechobee in Florida. He returns to Exposed to open Season 5, this time fishing the waters of Alabama’s Lake Guntersville.

Exposed was fortunate to film with Jordon in 2015, as he suffered a career-threatening wrist injury in July that cut his season short. This week ProPatterns caught up with Jordon, who said his strength was coming back, but he had a long way to go before making a full recovery. “The injury has really gotten me mindful,” he said. “Our bodies are unbelievable creations. Twenty tendons and ligaments pass through the wrist alone.”

When asked what he has learned from his injury and what others can learn from any of life’s unexpected challenges, Jordon said, “Don’t let it get you down, because you can’t change it. Maybe the hardest part was not being able to play with my kids for six months…but work your hardest is all you can do. I’m counting my blessings, and this has been only a speed bump compared to what other people have to face. I look at an angler like Clay Dyer, who fishes without any hands, as a true inspiration. I’m hoping this injury helps me draw focus and gives me additional motivation for next season.”

When asked for a preview of what fans would be able to look forward to on Guntersville, Jordon set the scene: “We filmed on the first day of practice, and I called what was going to be the winning pattern. It was a dynamic period on the water, a warming trend running into a cooling trend with the fish coming into spawn. The grass wasn’t there, but the fish were laying down in timber because of the tornadoes that had passed through the region.”

Jordon explained his style of practice, “I don’t catch them in practice, but I do get them to bite. I don’t usually use a hook, but those big ones know how to eat, and those big ones, they’ll take your bait. When you watch Exposed, you see that every angler fishes a little different. If you watch all those pros, who have been successful, and figure out what their methodology is for practice, check out the tournament results, compare that to what you saw in practice, you can incorporate all of those styles that work into your own fishing.”

After a successful day of practice with Exposed, Jordon went on to land in second place after the first tournament day with 26 pounds. “Practice is critical to a tournament angler. I picked the right cues, but I didn’t adjust and try enough swim bates during the tournament,” Jordon said. Skeet Reese won the tournament, fishing off the same “magic tree” Jordon had cued on during practice. “More power to Skeet,” Jordon says, “I had a blast filming with Exposed and had a blast at the tournament, but there’s no prize for winning practice.” Jordon, who has won past tournaments on Guntersville, added: “I will say that Exposed is an unbelievable resource, and Guntersville is a classy lady of a lake.”

This year, Exposed takes fans to Lake Guntersville with Kelly Jordon on Jan. 20, with 2013 Rookie of the Year, Hank Cherry on Jan. 27, and with 2011 Rookie of the Year, Ott DeFoe on Feb. 10. Rounding out Season 5 of Exposed are Brent Ehrler, Fletcher Shryock, Mark Menendez, Chad Morgenthaler, Jared Lintner, Matt Reed, Brandon Palaniuk, and Mike McClelland.

To celebrate the launch of the fifth season of Exposed, ProPatterns is offering bundled membership packages that include a 40% discount on DVDs, tees, and ELITE membership subscriptions. Fishing enthusiasts new to ProPatterns can browse the ProPatterns Video Vault to find their favorite angler and tour ProPatterns.com to discover all of the other features and benefits a ProPatterns membership has to offer.