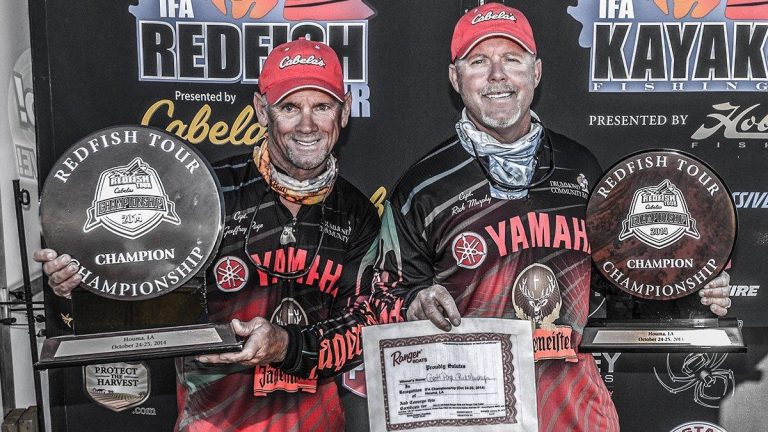 In a dramatic, come from behind victory, the Florida team of Rick Murphy and Geoffrey Page won the 2014 IFA Redfish Championship in Houma, LA, October 25, 2014.

The duo traveled more than 100 miles by water each day through Louisiana’s brackish bayous to reach their destination in Venice. According to Murphy, of Homestead, Fla., the fish were concentrated on a particular shoreline that offered an abundance of forage.

“There were five different species of bait(fish) literally on one shoreline,” stated Murphy. “We knew there was so much protein there, that if we could catch a (regulation) fish, he was going to be really big!”
Page, from Sarasota, Fla., said, “The Hildebrandt Drum Roller® spinnerbait paired with a BassAssassin soft-plastic trailer was the key to making them bite.”

“The Drum Roller is formed using pure tin, which weighs approximately 2/3rds as much as lead of the same volume. That makes a huge difference when you’re fishing in super shallow water…places where red drum (redfish) frequently feed. By combining its unique head design with the right colored soft-plastic trailer and Premium Hildebrandt Blades®, the Drum Roller’s flash and profile will match just about anything a redfish feeds on.”