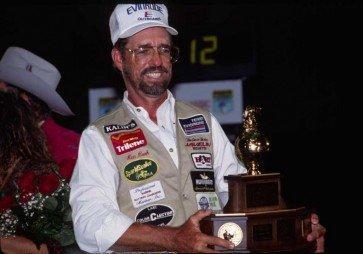 Legendary angler, Hall of Famer, and 1991 Bassmaster Classic champion Ken Cook passed away of apparent heart attack reports said early Friday, Jan. 8, 2015. He was less than a month from his 69th birthday but still very active in hunting and fishing. He is survived by his wife Tammy and his three sons Hunter, Tanner and Jason as well as many grand children.

Cook retired from professional fishing in 2009, but his impact on fishing has lasted. He won the first 6-figure payday with his win at the 1983 Super BASS event on the St. Lawrence River and the $100,000 first-place check, that would become the norm in professional fishing. His “trusty” spinnerbait was a dominate force in the 80s, by his own admission accounted for 80-percent of the bass he weighed in tournaments.

His biology background from Oklahoma State and his time with the Oklahoma Wildlife Department gained him wide popularity among his peers and professionals in the industry. But more than that his fatherly demeanor gave him respect of everyone that ever met him.

His passing came as a shock as he was on his way to a Safari Group meeting, was an active hunting guide, rancher and family man.

We are all deeply saddenend by his passing and offer our condolences and prayers to his family, friends and fans.

Here’s a great read from Don Barone of Ken refelecting on his fist bass fishing tournament.