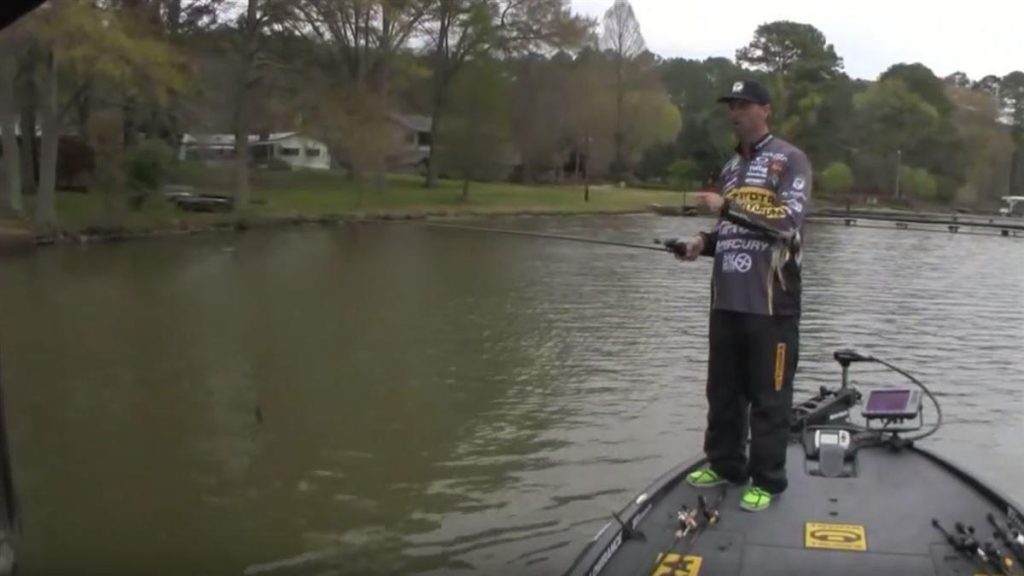 Alright, you’re hanging out with the G-Man, we’re sitting out on Guntersville, it’s a cloudy, wintery day, not the ideal day for dock skipping but it’s what I get known for alot is skipping docks, skipping docks, everyone wants to go skip docks. Not with a spinning reel, my wife does that, I throw with a bait caster. 20 lb line is my most preferred line size. I throw Vicious fluorocarbon, a 3/8 oz old school Arkie jig, this is a ball head, a little Zoom Twin Tail Trailer with a little finesse skirt on there, whatever I had tied on there from Lake Norman, but that is the combination I would skip 90% of the time. Don’t try to skip too heavy of a bait, you start out with a 1/2 or 3/4, it’s really a fight, 3/8 is all you need. This is a 7 foot medium heavy Smoke Quantum Rod, a 6.3 to 1 reel and everything after that is basic technique, the cast, the roll of the wrist and the placement of the bait and we are going to try and shortcut your learning experience, in just a few minutes on Wired2fish on how to skip docks on Lake Guntersville. And if we’re lucky, we’ll get a bite!

When I make the cast, I roll my wrist and I stare at the area I want to throw at. I kind of keep the rod down on the roll. When I’m reeling my bait in, I kind of keep slack out, I roll my wrist, the bait around, under the dock. You almost want to picture that bait sliding and it will simply slide across the water. You know it’s hard to practice this on a lake sometimes; too many people are scared they are going to get back lashes; they are going to ruin their stuff. If you have any pieces of concrete or somewhere at home that you can slide a bait across of, get up in a chair and just start rolling your wrist and skipping that bait, skipping that bait on that concrete until you get the smoothness of the cast where the bait wants to flow out there and flop. If it’s hitting the concrete hard and bouncing, it’s going to hit this wall and bounce.

A couple things you don’t want to do, is don’t tighten all your stuff down so tight so that the line won’t come off your reel. Most people want to do that thinking that they are going to prevent a backlash and all you are going to do is form a backlash because, it is going to make you over throw. It’s no different than a pro player over swinging on a baseball bat; you don’t want to over throw the cast. You simply want to be able to flip your wrist, send it under there and put it in those areas. And this technique for me, I started doing this on Smith Lake, years and years and years ago, makes me sound old……really, hell I’m not that old, hang on, back that up a little bit! I started doing it many years ago trying to catch fish that were highly pressured when we didn’t have a lot of fish in the lake and you are trying to put the bait in there when you think other guys are not putting their bait in and I know if I come through here flipping, guys have got these outside poles, I skip 15 or 20 foot back into the dock, it’s a real subtle approach, I am all of a sudden, fishing new water. So that means it’s simply a technique and an advantage on your competitor. When I throw that bait in there, I like to hop it; you notice I constantly keep it moving. Very little do I let the bait sit.

Now I just left Lake Norman and the bite there was really kind of funny when you skip those docks, you actually had to drag the bait. Once you got it under there, you had to just drag it out from under there. That is very unusual to see that. Most of those fish are unmolested under the docks and they are generally pretty aggressive so if you make the cast, keep your line tight and hop the bait a little bit and let it hit the bottom, you’re generally going to get the strike within the first two movements of the bait because the fish is aware the bait came in there by the initial action on the water. He knows it’s around him and usually they will run it down and they will be sitting there looking at it and as soon as you move it, they bite it. A lot of the bites even occur as soon as you pick it up, ya know they got it. So, that’s a couple of quick things but it’s the wrist action, I mean you get the back hand cast; you want to work on that. It’s not going to come easy and you’re never going to have it perfected. A lot can go wrong with the back hand, I mean look at McEnroe, he didn’t last long in tennis doing it.

Let’s get to the next dock, look at some more techniques and what were kind of feeling for under there. I see a black spot right there. You really want to focus on your targets, get to the dock, get to know the area, stare at it and look at your next cast. When I make this cast, no matter where my rod tips at, my eyes never leave my target of where I want that bait to hit. If I want it to go by that red pole, my eyes will never leave that red pole back here. I’m constantly going to be looking at that red pole and skipping. Looking at that red pole and skipping. And if I started down that dock, I want to move it to the next pole, I stare at that pole and skip in beside it, skip in beside it. The bait’s down, I work it a little bit, no bite, I look right to the next pole, maybe I want to go in beside it, keep your eyes on the target, skip it right in by. Never take your eye off the target that you are trying to hit. If you catch yourself trying to skip docks and you’re looking at the dock and you’re watching your rod, look at your target. If I want to put that bait in between that pole and that square pole, I stare at that target. Now I went right to the right of the square pole but not bad for a rookie. Simply keep your eye on where you want your lure to go. When you take your eye off that, it’s when the whole puzzle starts coming unwound so I’m moving up each level, each time I’m going up that walkway, just going and going and going. If I could skip in on a piece of brush, that’s even better. In this situation, it would be kind of hard to throw that way, so if my hands aren’t cold, and my backhands good, I go right back where I needed to be.

Whoop, I thought one bit that! Karate chop.