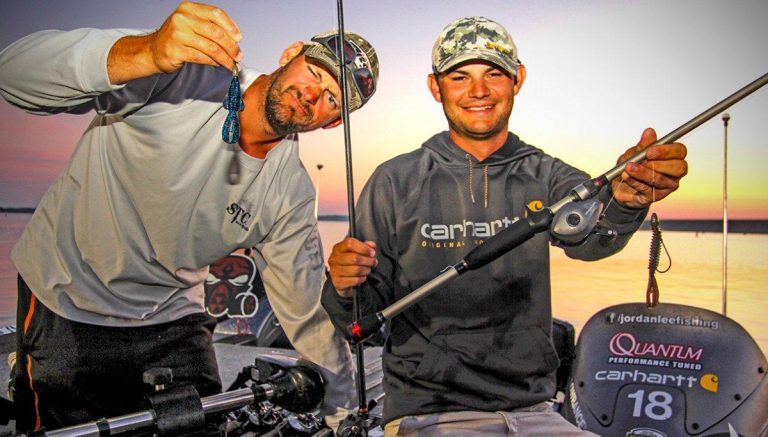 Not only is former Carhartt Bassmaster College Series Champion Jordan Lee one of the most naturally talented young tournament anglers to come along in years, but he’s also one of the most laid-back dudes you’ll ever meet, and a pretty good headline writer.

“You’ll think of something cool for a headline, but you could title this story ‘Texoma Flipfest’ because that’s what 90-percent of these guys are doing  – they’re flippin’ and pitchin’ to flooded trees and bushes,” says Lee.

Just to make sure he was delivering accurate news, young Lee consulted always-comical David Mullins, recent winner of the Bass Pro Shops Southern Open, who was beached next to him tying on lures in preparation for Day 2 of BASSfest.

“It’s what 80-percent of ‘em are doing for sure, and you’re right, 90-perecent may be more like it,” confirms Mullins. “With all this flooded habitat, why would a bass live anywhere else?” says Mullins. “And heck, on this lake, if you swim out deep, a big striped bass might eat ya’, so just go ahead and hang out in the bushes.”

It’s been a really longtime since a Bassmaster event involved so many fresh flooded wood targets. And the best anglers in the world may be grinding for keeper bites on Texoma, but lots of fish are being caught, and there’s a level of excitement for being able to deploy their shallow water short string game.

Is it Pitchin’ or Flippin’ – “It’s mostly pitchin’,” says Lee. “People overuse the word ‘flippin’ – but that involves grabbing the line between the reel and the first rod guide to drop the lure on the fish at a really short distance, when actually we’re pitchin’ – allowing the rod and reel to swing the bait at the bushes from a little longer distance than what flippin’ does.”

Best Lures: “Texas rigging a Strike King Rage Tail Structure Bug, no doubt about it, and I say that with confidence because so many guys have asked me if I had any to give them. I’ve given away just about every bag of Structure Bugs I own,” says Lee.

“In the summer, you want a soft plastic lure with tons of action, something with appendages that puts out a lot of vibration – and that lure does both without getting snagged on branches,” he adds.

Jigs vs. Soft Plastics: “Most guys don’t flip a jig in cover that’s as thick as these flooded bushes are, because a jig gets hung-up a lot more than Texas-rigged plastic,” says Lee.

Peg Your Worm Weight, or Not: “You absolutely have to peg your weight with a bobber stopper when you’re fishing cover that’s as thick as these bushes are,” Mullins chimed-in. “If you don’t peg, you create a space between your worm weight and the lure, and that leads to constant snags.”

As far as the weight of the lead or tungsten he chooses, Lee says he’s using a ½ ounce at Texoma. “Most of the bushes I’m fishing have 5 to 6-feet of water around them, and a lighter weight won’t get through that very well,” says Lee. “Plus, with 25-pound line, the rate your lure falls with that ½ ounce weight allows you to get the lure deep into the cover, and then back out, and on to the next cast. A lighter weight would take too long.”

Rod, Reel, Line:  “I’m using a 7’ 4” Smoke rod, and the brand new Smoke HD reels with the big spool, they handle heavy 25-pound fluorocarbon line really well, and they have an oversized handle that’s like a winch,” says Lee.  “Hackney’s used Quantum a lot longer than me, and he says it’s the best reel they’ve ever built,” says Lee.