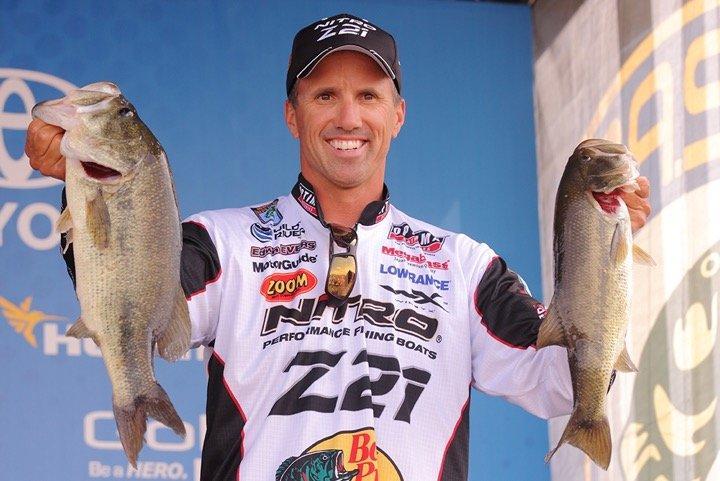 The wind was blowing hard across Lake Havasu before daylight Thursday, and it only got worse throughout the day as it sometimes pushed 30 miles per hour.

But big gusts and even bigger waves weren’t enough to keep the scenic fishery on the California-Arizona border from showing just how far it’s come.

Oklahoma pro Edwin Evers caught five bass that weighed 20 pounds, 7 ounces to take the Day 1 lead in the Bassmaster Elite at Lake Havasu presented by Dick Cepek Tires & Wheels. He was one of 20 anglers to bring at least 16-0 to the scales on a day when many elected to fish close to the launch site instead of making rough journeys along the Colorado River.

“It was a great day, but I wasn’t really doing anything special,” Evers said. “It’s not like I’ve got one area I can go into and find a big school of fish. I’m going to have to fish new water all week, and hopefully find more fish like I caught today. The fish are out there, but it’s going to be a week of adjustments, for sure.”

A 20-pound bag was once considered virtually impossible on Havasu, but anglers raved Thursdayabout the lake’s metamorphosis. Murray, who has been fishing Havasu for three decades, said he once enjoyed fishing tournaments on the lake because he knew it wouldn’t take much to win.

He said things are different now.

“I’m fishing techniques I don’t normally fish, actually a technique that I used to win a tournament on this lake 23 years ago,” Murray said. “I’ve been fishing this lake since 1985. Back then, it took about 10 pounds to win here. I’m fishing the same spots now and just catching bigger fish.”

Murray said he believes the size of the bass on Havasu began improving when quagga mussels appeared during the early 1990s.

Quaggas are an invasive Ukrainian species that most believe were accidentally introduced into the lake. The mussels often settle in massive colonies that can block water intakes and affect municipal water supplies, causing billions of dollars in damage.

“Quagga mussels kicked the food chain into high gear,” Murray said. “Divers say the crawdads are all over the bottom, and the redear (sunfish) are growing to world-record size now. Before the quaggas showed up, fish this size just weren’t here.”

While some anglers were bothered by the high winds Thursday, others, like Murray, said it actually helped their cause on a lake as clear as Havasu.

“The wind is why they bite,” Murray said. “If we didn’t have the wind today, it would have been a battle – at least for my stuff. I saw the weather forecast, and I geared my tackle for the wind.”

If the forecast is correct and the wind is much lighter for Friday’s second round, Murray said he might have to use some new tricks to further his success. Tharp and other pros said it isn’t likely to have much effect on their tactics either way.

“I really only saw one other angler doing what I’m doing,” said Tharp, who needed the good day after finishing 61st, 84th and 98th in the first three Elite Series events of the season. “I caught my fish early and then spent most of the day running new water, looking for something I could use the rest of the week. I actually got three bites this afternoon and didn’t set the hook.

“I know it does for some, but I honestly don’t believe the wind makes any difference for what I’m doing.”