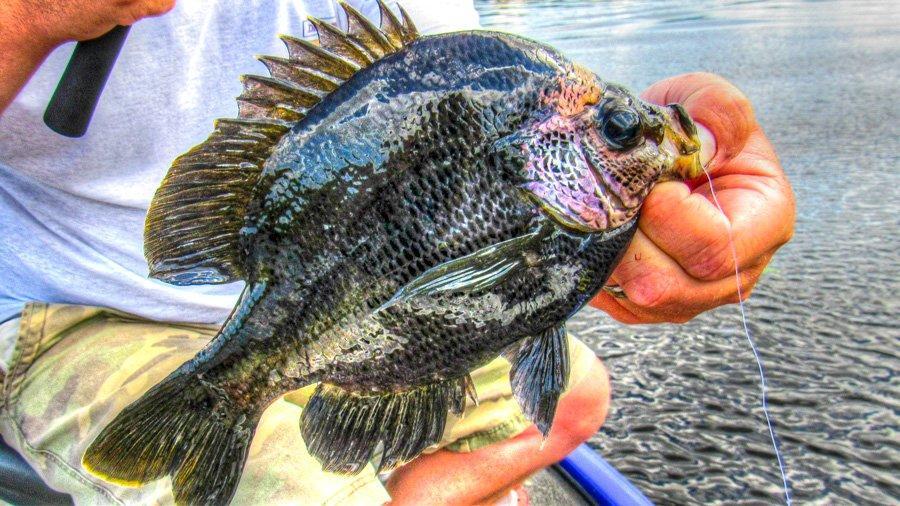 Whether you call them bream or bluegill, pound for pound there is not a freshwater fish that fights harder than this mighty panfish. Picking bream off of trees or out of vegetation is always a good time, but locating beds with 50 to 100 of these tenacious panfish in an area the size of a kitchen table is an absolute blast! And, itâ€™s a great way to get a kid or new person into fishing!

Bâ€™nâ€™M Poles and Lucas Oil/Hydroforce Pro Staffer Matthew Outlaw is a professional crappie fisherman from Santee Cooper, S.C., who recently won the BassProShopâ€™s Crappie Masterâ€™s Tournament on Lake Marion in his home state. Growing up fishing in this vast southeastern swamp has taught Matthew how to catch a lot more than just crappie, and learning the trade from legendary angler Whitey Outlaw, who happens to be Matthewâ€™s dad, didnâ€™t hurt.

The hardest part about fishing beds for bluegill is not catching the fish, but finding the bed in the first place.

WHEN TO LOOK FOR BEDS

Matthew starts searching for bedding gills in late April and early May, depending on the moon.

â€œWhen the first full moon arrives after Easter, the days leading up to, during, and immediately after are the best times down here,â€ said Outlaw. â€œWe catch bream on the beds throughout the late spring, but the full moon is by far the most productive time.â€ 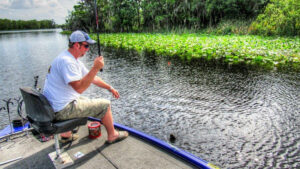 HOW TO LOCATE BLUEGILL BEDS

Different lakes vary when it comes to where the bream bed. Pea gravel and sandy bottoms are great areas on most lakes, and muddy bottoms in open water surrounded by lily pads or grass are productive on others. Outlaw prefers downed logs or stumps to find beds in the swamp.

â€œOn the lower end of Santee, theyâ€™ll bed in open water and you can find them with the Humminbird Side Imaging,â€ Outlaw said. â€œThe beds will look like a bunch of small craters on the graph, theyâ€™re easy to spot, but in the swamp they prefer some type of cover, either downed trees or submerged stumps.â€

â€œFinding beds in the swamp is a lot of trial and error, but once you find one it will usually be active every year,â€ Outlaw said. â€œIf Iâ€™m searching for new beds Iâ€™m going to look for downed trees in 2 to 5 feet of water, and look for foamybubbles. When the bucks (bucks and hens are how they refer to males and females in South Carolina) are fanning the beds, they churn up a lot of bubbles, and sometimes you can smell them.â€

When asked what a bream bed smells like, Outlaw replied, â€œItâ€™s hard to describe, Iâ€™ve heard some people say it smells like watermelon, it just smells like fish to me!â€ 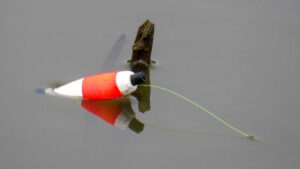 Although a small fortune has been made selling tiny feather jigs like the Popeye and Grizzly Jig, and red wigglers, waxworms, and about any other bite-sized insect would suffice as effective bream bait, Outlaw doesnâ€™t stray from the standard.

â€œItâ€™s just impossible to beat crickets,â€ said Outlaw. â€œIf you drift a cricket by a bream, or any fish for that matter, heâ€™s gonna eat it!â€

Whitey and Matthew Outlaw are so proficient at pulling in big bream, shellcrackers, and crappie, they developed a rod specifically for their preferred technique, and thus was born the Bâ€™nâ€™M Whitey Outlaw Double Duty. The rod is essentially a high-end, graphite cane pole that weighs next to nothing but offers a ton of backbone. The rod has no eyes outside of the tip and a loop a few feet back, and is also void of a reel seat.

Their setup utilized around 12-foot of 8-pound Viscious monofilament ran through the tip of the rod and then wrapped around the pole a dozen or so times until reaching the single eye, where the line was tied off. At the end of the line a #4 Tru-Turn hook was tied on, with a small splitshot 6-inches above it and a toothpick float 2 to 4-foot above that, depending on water depth. 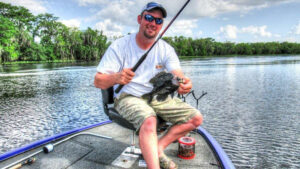 â€œYou want the cricket to drift just off the bottom, since the bream usually have their belly on the bottom,â€ said Outlaw. â€œThe Tru-Turn hook beats a standard cricket hook every day and twice on Sunday. That bend in the shaft turns the hook up into the top of the breamâ€™s mouth as itâ€™s being pulled out, and when youâ€™re staying back and pitching to a bed, rather than fishing directly over the fish, youâ€™ll pull a cricket hook out sideways sometimes and miss the fish.â€

The method the rod was designed for is to either flip or swing your bait up. If there is nothing overhead, the Outlawâ€™s will employ an overhand swing that resembles fly fishing. Swinging the bait forward, or if necessary using a side-winding motion to get under an overhang while channeling A River Runs Through It is also effective.

The rest is fairly simple, wait for the bobber to go down and set the hook. Then, get ready for a heck of a fight!

â€œCatching them is a lot of fun, but after theyâ€™re scaled, gutted, battered and fried, eating them is just as good if not better,â€ Outlaw said. â€œA plate full of whole, fried bucks may be the best part of fishing beds for bream!â€

No matter how you prefer to catch them, or eat them, fishing beds for bluegill is about as much fun as you can have in a boat! 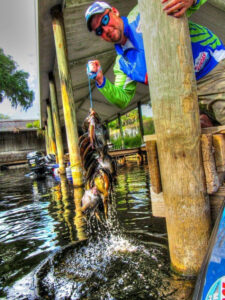