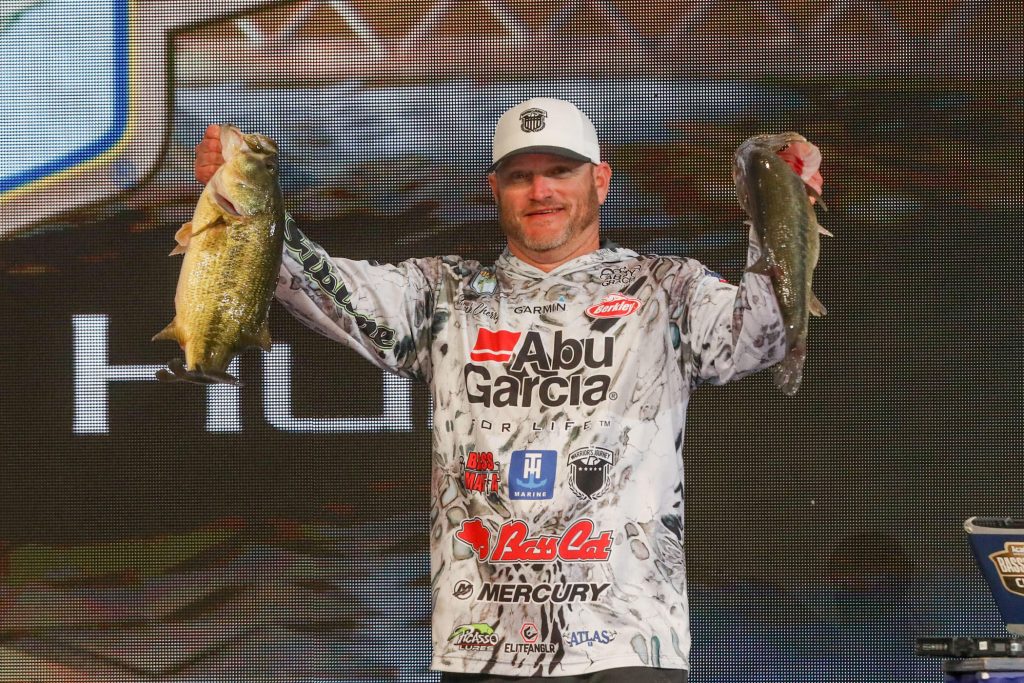 For a moment, he thought it might even be broken.

But Cherry powered through the pain â€” and with only one good arm, he caught five bass that weighed 29 pounds, 3 ounces to take the lead at the 50th edition of the Super Bowl of Professional Bass Fishing. Competition is taking place on Lake Guntersville with weigh-ins at the Birmingham-Jefferson Convention Complex.

Cherry said his injury, which occurred as he was reaching down to grab a fish, would likely require a visit to a local doctor â€” but it wouldn’t keep him from fishing Saturday morning.

“I didn’t expect to catch them like this at all,” Cherry said. “What I caught my fish on was actually plan B. But it’s plan A now, for sure.”

Believing the location and structure he was fishing were the real key to his success, Cherry made no secret of the bait he was using. He said he started with a lipless crankbait, but the high winds kept a loop in his line and made it hard for him to maintain proper contact with the bait.

“That’s why I switched to a bladed jig,” he said. “It just made more sense for the conditions we were fishing, and it turned out to be the perfect choice.”

Cherry, who’s previous highest finish in a Classic was a third-place showing at the 2013 event on Oklahoma’s Grand Lake, said his injury won’t affect him â€” and he believes the area where he caught his bass could continue producing big bags the rest of the event.

“I think the area where I caught them, historically, has shown the potential to reproduce,” he said. “The fish are coming in there. There were none in there in practice until Wednesday. That’s when I started getting a hint they might be coming.

“I’ve still got one good arm, and I think the fish will keep coming.”

As Classic leads go, Cherry has a good one with his closest competition almost 8 pounds back. Virginia pro John Crews is tied with Alabama angler and Lake Guntersville veteran Clent Davis.

They both have 21-8, but they told vastly different stories about their Friday surroundings.

Davis, who has fished Guntersville all of his life, caught the bulk of his weight on a spot he hadn’t done well on since at least 2006. The spot was good to him, but it was crowded.

“There’s a lot of boat traffic in the area I’m fishing,” Davis said. “I wasn’t even the first one to fish the spot Friday morning. There were boats sitting everywhere when I got there.

“With tomorrow being Saturday, it could be even more crowded. Who knows? It is what it is.”

Crews, on the other hand, said he caught his limit quickly fishing one small sweet spot on a long stretch of grass.

“It’s like a mile-square grass flat, and I never saw anybody out there,” Crews said. “It’s like a needle in a haystack, the spot where I caught them. It’s not obvious. There’s no point or anything. I was just fan casting like an idiot in practice and caught two in two casts and got out of there.

“There’s something special about it, but I don’t know exactly what.”

Even on a tough, blustery day, Lake Guntersville produced six bags of 20 pounds or more and numerous bass in the 7-pound range. Cherry’s bag was anchored by two 7-2 largemouth, but South Carolina pro Todd Auten took the lead in the race for Berkley Big Bass of the week with a 7-9.

The tournament resumes Saturday with the full field of 53 anglers taking off at 7 a.m. CT from Civitan Park in Guntersville. Only the Top 25 remaining anglers after Saturday’s semifinal round will compete on Championship Sunday for the grand prize of $300,000.

See the full results at Bassmaster.com.