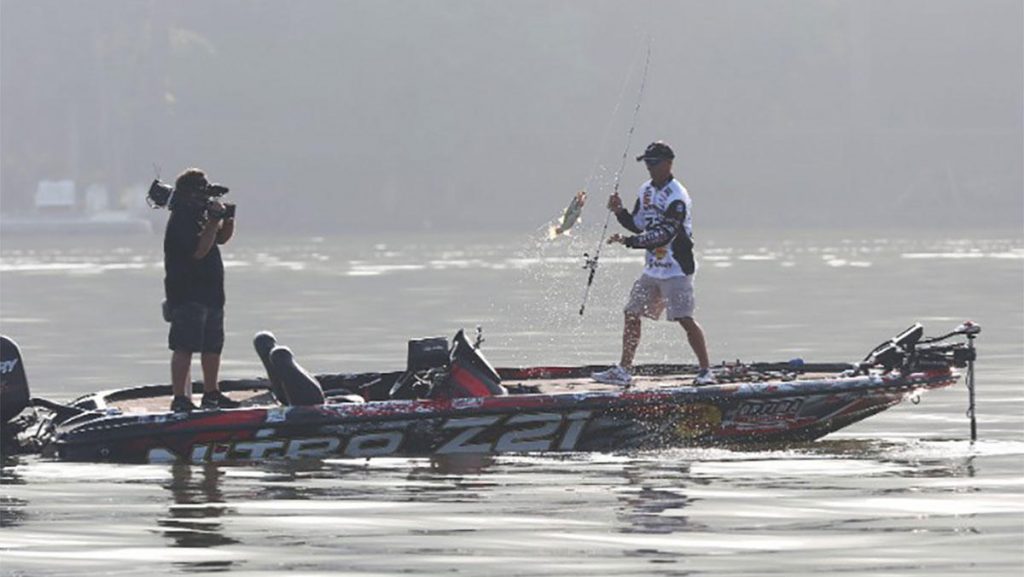 The fan-favorite BASSfest will be held June 8-12 at Lake Texoma on the Oklahoma-Texas border, and the season finale, the Toyota Bassmaster Angler of the Year Championship, will take place at Minnesota’s Mille Lacs Lake.

“Similar to the GEICO Bassmaster Classic presented by GoPro, the Bassmaster Elite Series tournaments have become extremely popular ‘happenings’ for bass fishing fans. By taking our fishing festivals to Lake Texoma and Mille Lacs, we will expose the sport to new fan bases,” said B.A.S.S. CEO Bruce Akin. “And, our Elite Series anglers are sure to enjoy the new challenges these lakes present.”

In addition, officials of the world’s largest fishing organization revealed a new tournament for 2016: the Bassmaster Classic Bracket tournament, to be held on the Niagara River out of Buffalo, N.Y., July 19-22.

In that event, the Top 8 finishers in Elite No. 7 on Cayuga Lake, New York, will go head-to-head in a bracket format tournament that will pay $50,000 in cash — in addition to the prize money they will have earned at Cayuga — and award a guaranteed spot in the Super Bowl of Bass Fishing, the 2017 GEICO Bassmaster Classic.

The Classic Bracket will be streamed live on Bassmaster.com and will feature — for the first time ever in Bassmaster competition — catch-weigh-release scoring. That is, competitors will have their catches weighed instantly on the water by judges, and the bass will be released back into the water at the spots where they were caught. Only the heaviest five bass per angler will be counted.

Lake Texoma, an 89,000-acre impoundment of the Red River, was the site of the 1979 Bassmaster Classic won by Hank Parker, now a popular television fishing show host, in September of that year, and it was the venue for Bass Pro Shops Bassmaster Opens in 2007 and 2010. It has not hosted an Elite event, however.

Parker caught 31 pounds and won $25,000 in the ’79 Classic by using a “flipping stick” borrowed from fellow competitor Gary Klein, shining the national spotlight on the then-new technique of “flippin’.” Klein finished fourth in that event. Veteran pro Rick Clunn was third.

Headquarters for the five-day BASSfest will be Choctaw Casino Resort at Durant, Okla. As in the two previous BASSfests, both held on Tennessee River impoundments, the 2016 event will feature a military and fan appreciation day, complete with Bassmaster University seminars, an expo and other activities.

“Choctaw Casino Resort is excited to partner with B.A.S.S. to bring the best anglers in the country to the Lake Texoma area,” said Wendy Carter, director of marketing for Choctaw Casino Resort – Durant. “We look forward to hosting competitors and their families, and introducing them to our many new amenities, like our recently-opened entertainment complex called The District. In The District, families can enjoy an arcade, 20 bowling lanes, a movie theater, laser tag arena and food court.”

No B.A.S.S. professional tournament has ever been held on Mille Lacs, which lies about 90 miles north of Minneapolis. At 132,500 acres, the lake is Minnesota’s second-largest inland lake and is known among bass anglers as a bucket list smallmouth destination. It is ranked 10th on Bassmaster Magazine’s 100 Best Bass Lakes list for 2015.

“We are proud to support the Toyota Bassmaster Angler of the Year tournament in 2016,” said Tracy Sam, general manager of Grand Casino Mille Lacs. “Not only will it help bring thousands of new visitors to the area, it’s a great opportunity to showcase everything Mille Lacs has to offer.”

Earlier this year, the state of Minnesota announced it would permit culling bass in major tournaments on Mille Lacs in hopes of inducing B.A.S.S. and other tournament organizations to schedule events there. The region’s tourism economy has been hard hit by a declining walleye fishery, on which lakeshore lodges and other businesses depend for much of their income.

“We applaud the Minnesota Department of Natural Resources for its efforts to accommodate competitive bass fishing,” said Akin. “The Angler of the Year Championship is expected to generate $3.4 million in economic impact for the region, and the area will continue to benefit as the bass fishing world learns about the fantastic fishing available in Mille Lacs Lake.”

“The Mille Lacs Area Tourism Council is thrilled that the 2016 Toyota Bassmaster Angler of the Year tournament will be coming to Mille Lacs Lake (September 15-18),” said Tina Chapman, executive director of Mille Lacs Area Tourism Council. “We have a rich history of great fishing in this community, and this tournament is a chance to increase awareness of numerous fishing opportunities to new anglers. This is great news for businesses and communities all around the lake.”

“Toyota is proud once again to sponsor the championship, which elevates the Angler of the Year title to one of the most prestigious awards a professional angler can earn,” said Ed Laukes, vice president, Marketing, Performance and Guest Experience for Toyota Motor Sales. “After competing in 10 events in as many states over the course of the season, the AOY champion will truly have proved that he is the best of the best.”