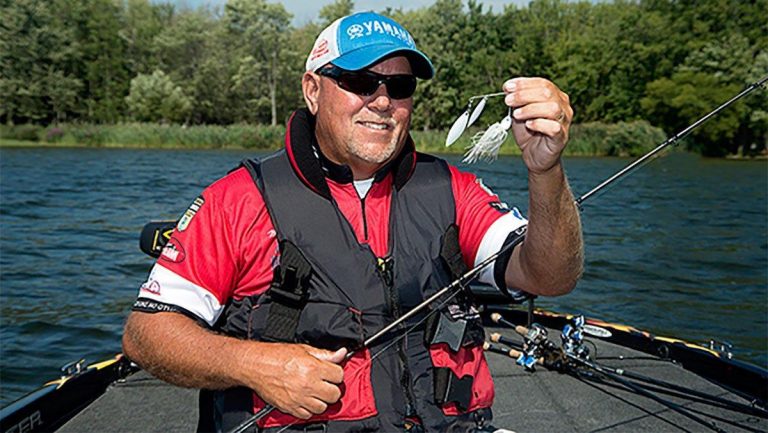 November ranks as one of Matt Herren’s favorite months of the year, but not because he enjoys deer hunting—he knows it’s time to burn his spinnerbaits for autumn bass.

In this case, “burning” means reeling the spinnerbait as fast as possible while keeping the lure just two to three inches below the surface. It’s a technique the Alabama-based angler has used successfully on lakes around the country for more than two decades, but one many of today’s anglers frequently overlook.

“This technique is purely about getting reaction strikes,” said Herren, who will be competing in his sixth Bassmaster Classic next March. “Throughout the autumn months, when water temperatures are still generally in the 60s or high 50-degree range, bass are gorging themselves on baitfish and a spinnerbait probably imitates a shad or herring as well as any lure made.

“There is a lot of feeding competition among the bass, and they go after a fast-moving spinnerbait without hesitation, just trying to get it before another bass does. It works in stained to clear water and typically throughout the entire day, too.” 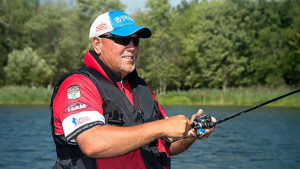 The Yamaha pro chooses spinnerbaits featuring what is known as thin wire construction. A thinner wire increases the lure’s overall vibration and also makes it easier to retrieve. Herren’s color choices are simple, too; any color is fine as long as it matches a shad, such as white or white/chartreuse. For maximum vibration, he uses double willow leaf blades and his weight choices range from 1/4-ounce to 3/4-ounce.

“When I fish spinnerbaits this time of year, I usually have three different models tied on and ready to use depending on how the fish act, and on the size of the baitfish,” Herren said. “One will be a very compact spinnerbait between 3/8 and 1/2-ounce in case the bass are feeding on smaller threadfin shad. I’ll also have two other spinnerbaits weighing 1/2-ounce and 3/4-ounce, but with different blade colors, such as gold or copper.”

“I really think one key to burning a spinnerbait over deeper water is slowing my fast retrieve just for a second to make the blades change their speed,” Herren said. “This can be as simple as stopping my retrieve, shaking my rod tip or slowing down so the spinnerbait sinks a few inches. It’s just for a split second to change the blade cadence—then I start reeling fast again. 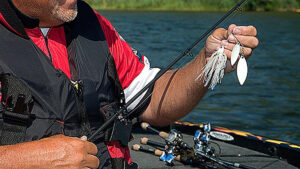 “Changing your retrieve like this is a pretty standard way to fish a spinnerbait anytime of year, but it’s important to remember to do it even when you’re reeling as fast as you can because it’s a major part of getting bass to react. In the fall, you’ll frequently have a bass following your spinnerbait, even though it’s moving fast, and just a simple change of cadence can be enough to bring a strike.”

In recent years as the spinnerbait’s popularity has lessened and other lures have seemingly taken its place in the limelight, the technique of burning has practically become a lost art. But don’t let that fool you—it’s a technique you should utilize throughout the entire fall.