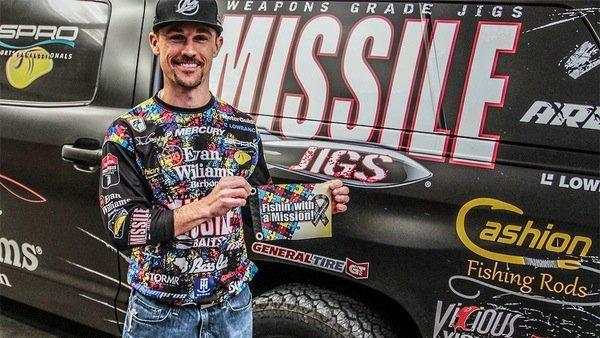 Autism Awareness is in full swing and now the fund raising portion of many in the bass fishing community including John Crews is in motion. John Crews’ Autism themed tournament jersey worn during the month of April, which is Autism Awareness month, at the Lake Guntersville BASS Elite event is now up for auction. Valley Fashions provided the jersey for Crews. 100% of the auction price of the jersey will be donated to the Autism Society, a national autism organization. Now, the jersey has been signed by Crews and is available on eBay here.

“Last year we raised some awareness and raised a great amount of money for Autism,” Crews said. “I know that our awareness efforts have been much better this year and I hope the fund raising portion does the same. We tried to have a little something for everyone’s price range that wants to donate through our various items.”

In addition to the jersey, Crews asked all the BASS Elite pros at the Lake Guntersville event to run specially made “Fishin’ With A Mission” Autism Awareness flag from their light poles. Almost every pro was proud to run the flag, autograph it and return them for auction. There will be various rounds of auctions for the flags to maximize donations and to give more people a chance to bid on them. Round one of the flag auctions will feature flags from Kevin Vandam, Ish Monroe, Chris Lane and over 20 more pros. Round one of the flag auctions will benefit the Doug Flutie Jr. Foundation and are available on eBay here.

Skeet Reese’s autographed flag will have a separate auction as the champion of the event since Dave Mercer is offering a $1,000 donation for the flag. If he is outbid, he will donate his bid along with the winners bid to Autism Speaks. John Crews-signed flags are available on MissileBaits.com for $100 each and benefit the Blue Ridge Autism and Achievement Center. Subsequent rounds of flags will be auctioned off as they become available and will benefit even more Autism charities.