As winter and ice leaves, cabin fever drives most anglers to ice-free locations. In my experience, the only thing worse than cabin fever is going out after a long winter and getting skunked. This early season cool water walleye fishing requires anglers to make just the right moves in order to trigger bites. Many important factors come into play, but focusing attention on three main considerations will help keep you from getting a goose egg on your first few trips of the year. 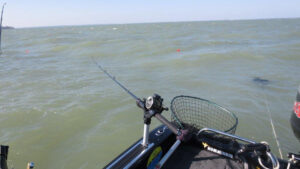 Whether it is jig fishing in a river or trolling for walleyes on big water, water clarity plays a crucial role in success.

On open lakes where a trolling bite occurs, gin clear water rarely allows us to mark any fish. The reason in most cases is simply that this “Caribbean blue” water is several degrees cooler than surrounding areas.

Walleyes vacate this area due to the lack of baitfish. Smaller shiners and other baitfish look for warmer water just like we do a heater in winter. The warmer water also offers natural camouflage for baitfish and makes it more difficult to be hunted down by a school of hungry walleyes.

The exact shade of water is the difference maker. Fish water too clean and see little too no life, fish water to dirty and see loads of marks with very few takers. Chocolate milk colored dirty water doesn’t typically make for a consistent bite unless it’s in a body of water such as the Mississippi River where the fish have adapted to it 365 days a year.

Often all of this “life” in the extremely dirty water are fish of other species such as catfish, carp, sheepshead or even large shad. Regardless, the strike zone is so small in this cool water period that you would have to get it right in front of their face to have a chance most days due to the decreased visibility.

The best option is to look for what many tournament anglers and guides call “chalky” water. The off colored water is not dirty, nor clean, but right in the middle. This shade is warmer than clear water, but has enough clarity to allow for a strike zone large enough for walleyes to hunt more than what’s right in front of their face.

With all of the technology currently available the easiest way to check for this “chalky” water is still to look off your transom at your prop. If you can read and see your prop clearly, the water is generally too clear. If you can barely make out the cavitation plate, it is too muddy. That in between perfect chalky water is where you can make out the prop, but not really well.

Using satellite imagery to see the pockets of water can help narrow down the lake and where it is “fishable” much faster than even looking at your sonar at this time of year. 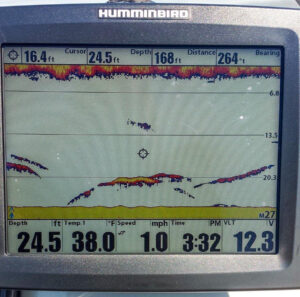 They say speed kills in sports, but it can kill a bite in spring fishing also. Going too fast with your presentation, whether it’s a jigging stroke or trolling pass, can turn a walleye off faster than telling the missus she doesn’t look good in that new dress. The cold water makes walleyes more lethargic and less apt to chase a majority of the time.

By using water clarity to help identify which areas are the highest percentage, you can afford to fish slower and cover less water more quickly. In most cases, you need to be moving painfully slow. When jigging, this can mean just hovering the jig or with hops of just a few inches. When trolling, it can mean using a combination of drift bags and an electric engine like the Minn-Kota Terrova anywhere from .7 to 1.1 mph.

An electric trolling motor allows you to slip the current and suspend a jig at the exact speed of the current or troll super quiet and make incremental speed changes to find that ideal speed for the day. Boat control is key when fishing in cold water for just about any species. 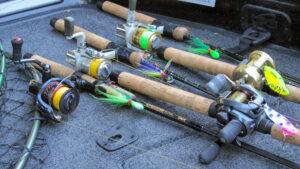 While speed and water clarity come to the minds of experienced anglers immediately, fishing line choices probably do not. Line however effects both how your lure will run and how deep it can go.

Most monofilaments have around 20 percent stretch, whereas braids have less than 5 percent. Having more stretch lessens the effect of boat and wave surge, making it less erratic. This extra stretch can also help improve your landing ratio when trolling by providing an extra buffer in your presentation.

This isn’t to say that braid doesn’t have a role in early season walleye trolling. The generally much smaller diameter to pound test ratio allows for a lure to get considerably deeper with braid. Popular lures such as Smithwick Rattling Rogues and Rapala Husky Jerks that can’t get deep enough to reach the strike zone on monofilament can get that extra depth necessary by using a braided line with a much smaller diameter.

When trolling, line sensitivity is rarely a concern; it is, however, a big deal when jigging in the early season. Braided lines typically dominate because they allow anglers to feel the slightest tap and stay vertical with less resistance from the thinner diameter. Often times a smaller lure weight can be used to both increase sensitivity and decrease line drag.

The advancements in the handling and durability of braided lines has caused it to be the overwhelming choice of walleye jig fisherman. The exception is when fishing shallow or casting and needing a slower fall on your presentation. Monofilament is much more forgiving as previously mentioned and will fall slower due to the larger diameter.

Think of a given line not as the right or perfect line, but the right line for the right application.

While it typically takes more than three factors to consistently catch walleyes, understanding water clarity and mastering speed and line choices will help stack the odds in your favor.