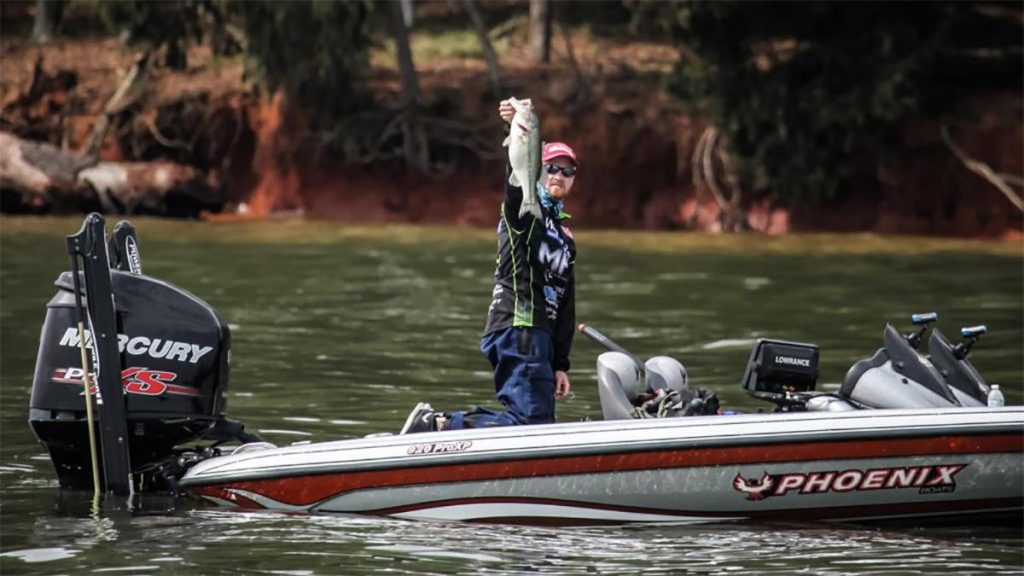 I did something completely foreign last week: I went fishing with a buddy, but this time I was in the back of his boat. I hadn’t fished as a co-angler in just about 10 years and to be honest, I didn’t know what to think about it. But I have been in a little slump with my fishing lately and my friend knew it, so he essentially demanded that I hop in his boat, enjoy the day and get back into the groove of things. He knew what I needed and he also knew that I was too stubborn to admit it. I needed a day of fun fishing.

When we pulled up to the boat ramp well before sunrise, it was a bizarre feeling. I got out of the truck and just kind of stood there not knowing what to do. I have my routine etched in my brain for launching my boat hundreds of times per year, but I didn’t know his and I didn’t want to get in the way.

The bizarre feeling continued as we arrived to our first spot. It looked awesome; this dude puts his time in and I was certain we were going to catch fish. But not even thinking about it, I fired my Fluke out in front of the trolling motor and he just giggled. It was pure instinct to cast in front of the boat and I had no intentions of cutting off the poor fella. After a profuse apology and some good laughs, I began to settle into my new role for the day. I have to admit, too, that it was pretty dang nice. I didn’t have to worry about anything. Stand up, cast, catch fish, sit down, eat snacks and cast again. Not a bad gig!

This single day on the water made me want to share some tips that will help you catch more bass from the back of your buddy’s boat. I won a state championship as a co-angler more than a decade ago and this day brought back a lot of helpful lessons I’ve learned along the way.

Always watch which rod your boater picks up 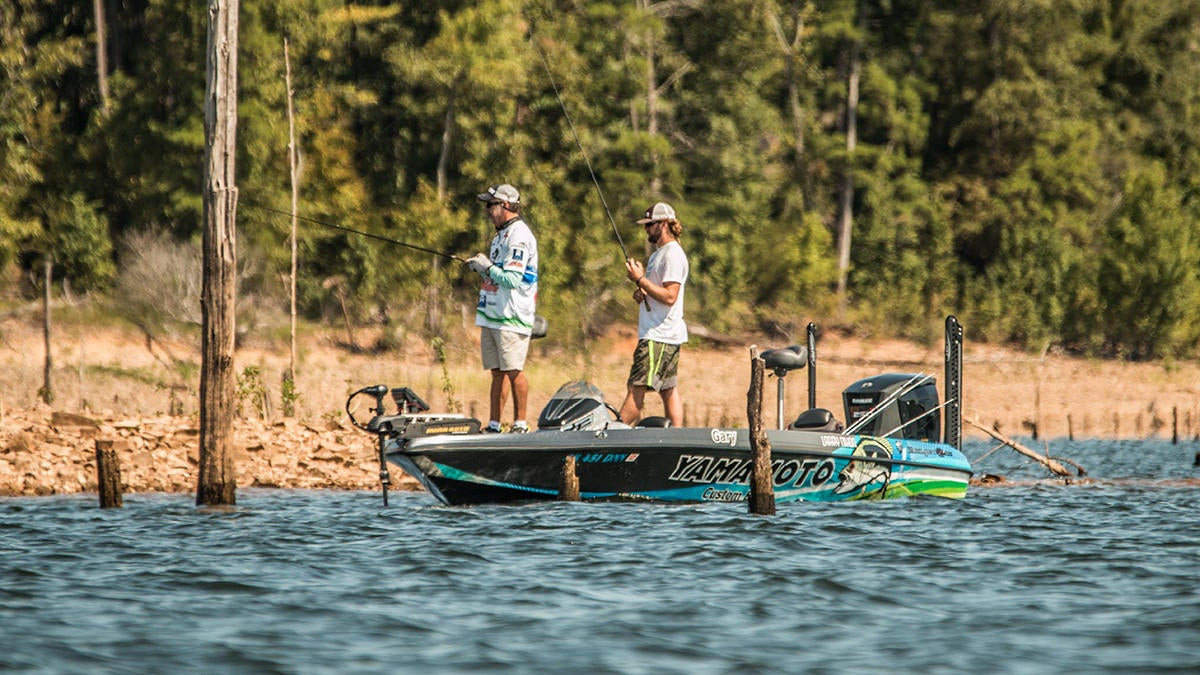 Differentiating your offering from you boater’s is probably the most important thing a co-angler can do. Essentially, you want to “train” your peripheral vision to notice the second your boater bends over to pick up a rod from the front deck. Always pay attention to what your boater is using. Don’t zone out when it comes to this.

This is especially important early in the day as you’re both trying to establish a pattern or prevailing bite together. If your buddy is chucking a frog around shallow cover, don’t throw a frog behind him. Instead, consider something subsurface such as a soft jerkbait-one of my all-time favorite co-angler baits. By doing something different, both of you might quickly learn that the bass won’t come to the top that particular day, but they’ll crush a Fluke twitched a few inches below the surface. Those little adjustments can pay enormous dividends for both you and your buddy throughout the day.

During last week’s fishing trip, my buddy was camped out on a particular area (out of respect for him, I won’t go into a bunch of details because it’s a really special area and the locals read my stuff, too!) and he was dead set on fishing slowly with topwaters. I put down my frog and picked up a squarebill crankbait and hooked the largest fish of the day. He had just fished that area with a frog, but I got that fish to bite with something subsurface.

My big fish came off at the net, too. And I got crap all day long for it. Heck, he was still jawing at me via text message last night. I deserve it. Full disclosure on that one.

But I digress. Pay attention to what your boater is throwing. I can’t say it enough. Unless he’s knocking their lights out with a particular bait, try to keep changing it up. One day this will pay off in a huge way for you-mark my words.

Don’t wait for the boater to call for the net 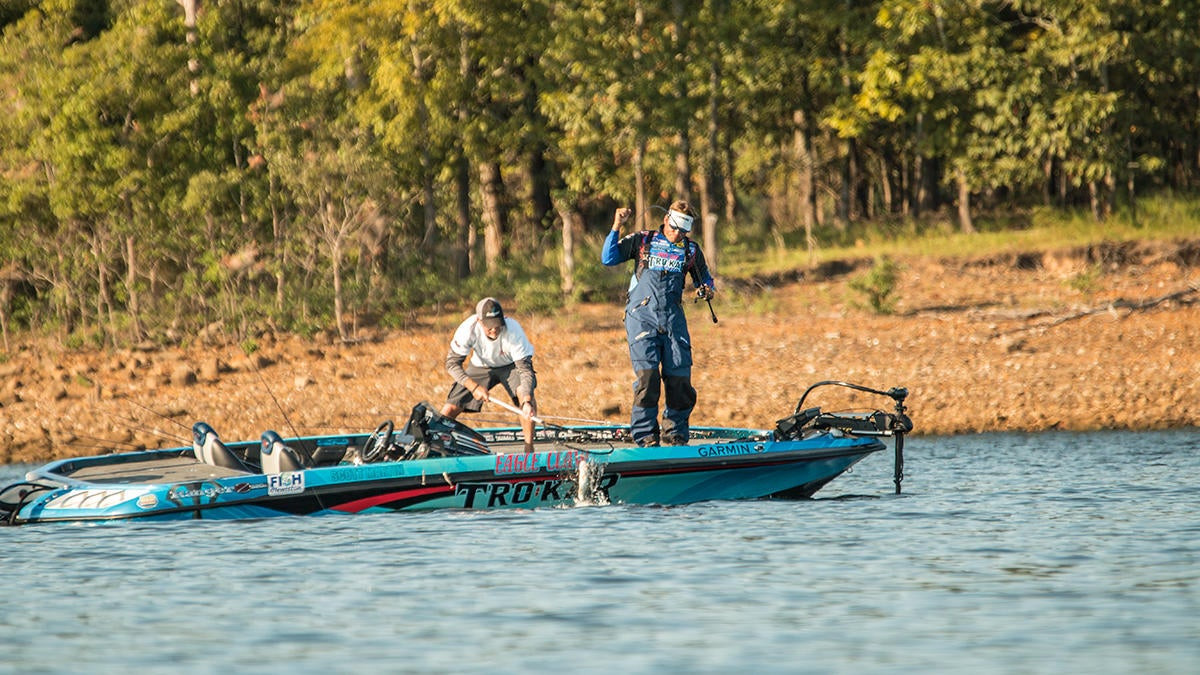 I’d sure rather have the net and not need it than the other way around. Wouldn’t you? I have to admit, my net moves were pretty dang crummy on my recent trip. Again, it was something I haven’t done in a long time. I fish tournaments largely by myself and I don’t even carry a net in my boat due to personal preference. I looked like a dang sloth running for the net most of the morning.

But I almost messed up and I learned a big lesson from it. My boater set the hook on a fish and I was a little slow to react. He’s fighting a big bass to the boat and my goofy butt is repeatedly asking him if he needs the net. I can assure you he was more focused on that big bass; he wasn’t hearing a thing I was saying.

We landed the fish, but it came within a few inches of coming off. So take it from me-when you see that hookset, grab the net. If it’s not a big one worth netting, you can always scramble back to the back deck. 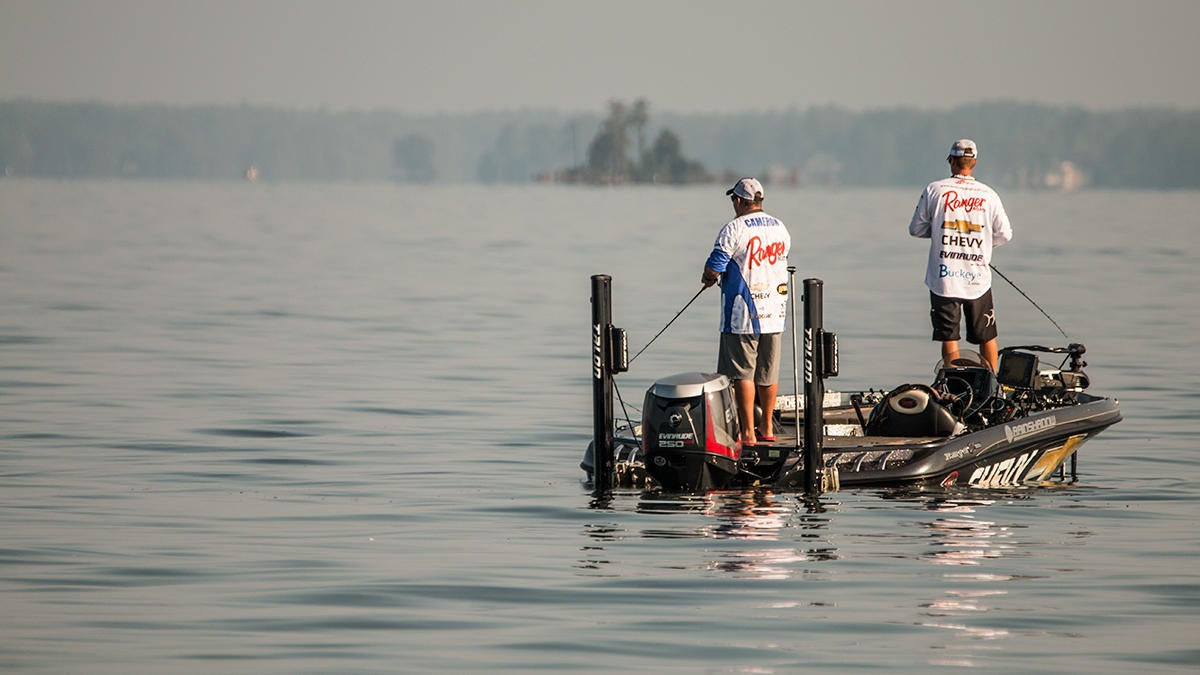 This is a touchy subject for some people. I have been both a boater and a co-angler plenty of times, so I’ve seen both ends of the spectrum. In my personal opinion (if yours is different, that’s totally fine), I think the boater should lead the decision-making process for much of the day. But if it’s not working or the action slows down, don’t be afraid to speak up; especially if it’s your buddy. A random-draw boater during a tournament might be a little different, but if you’re fishing from the back of a friend’s boat, don’t be afraid to offer an alternative viewpoint from time to time.

Whenever I’m a boater, I don’t like hearing a suggestion preceded by “We need to…”.

Maybe I’m being petty, but it’s all about how you phrase your suggestion. In my experience, it seems like it goes over a little better when you say something like, “We’ve been fishing a lot of grass today and it has been slow. How about we hit a few docks and see what happens?”

Your tone and how you phrase your suggestion can be a big difference maker. My buddy’s bite died down by about lunchtime and instead of coming across as possibly confrontational, I made a concerted effort to offer a constructive suggestion. It went over awesome and we went and fished my idea for an hour or two. He was more than willing to give my idea a shot and it worked out great.

Pay close attention to where your boater casts 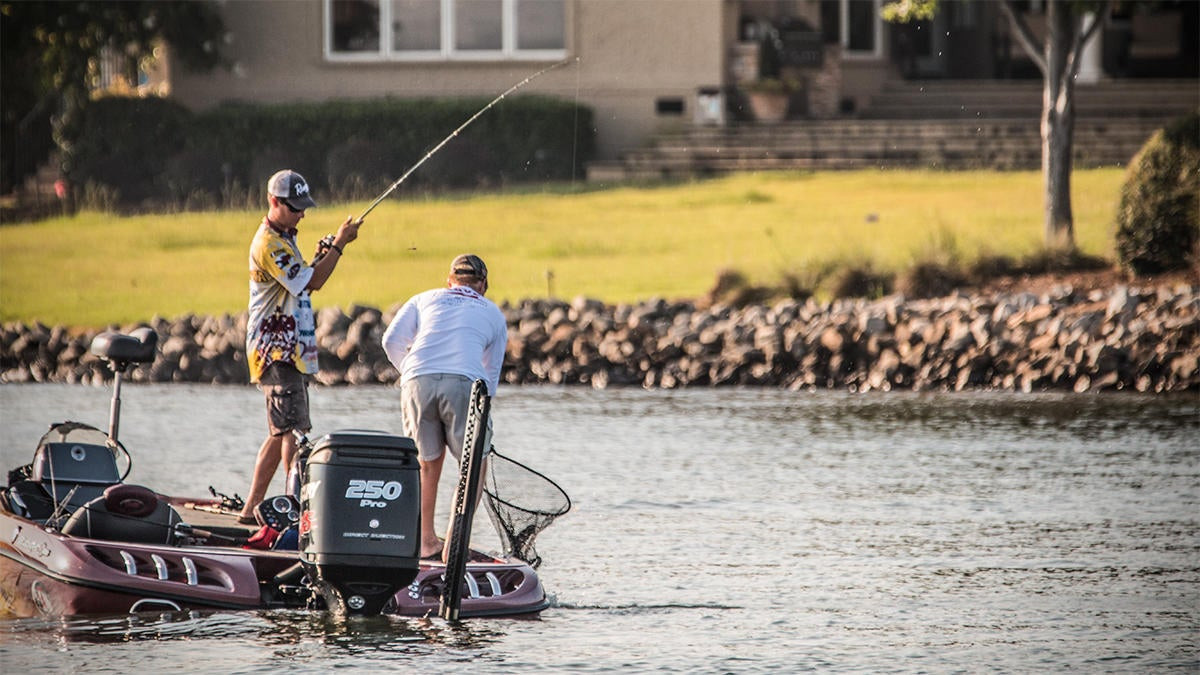 Bass fishing can be a game of inches. A slightly inaccurate cast can be the difference between a 6-pounder and nothing at all. When you’re on the back deck, this is even more magnified.

I have been on the back deck behind a lot of outstanding anglers. One of my best friends, Matt Henry, is the worst guy to fish behind. He’s like a dang vacuum cleaner; if there is a fish in front of the boat, he’s going to catch it. He’ll always put you on fish, but it’s insanely difficult to get bites behind that man. He is a machine.

Fishing from his back deck for a full college season years ago, I quickly learned that I would never get bit flipping or pitching my bug into the same area he just did. He was a very accurate caster and once his bait hit the water, he was very patient and thorough throughout his retrieve. This was frustrating for me at first. I can remember one tournament at Logan Martin where I couldn’t buy a bite behind this dude. It was making me crazy.

But as we fished more together and as I matured as an angler, I quickly learned to watch him like a hawk. I’d start noticing that each one of his pitches was targeting an indentation within a grass bed. So I started pitching my bait to small points in the grass bed. And what do you know? I started catching a bunch of fish and contributing to our limits. If he was skipping underneath boat docks, I’d start skirting the edges of the docks with a squarebill. It yielded a bunch of big fish for me over the years.

He is a heckuva fisherman. So I wasn’t going to contribute much by trying to eat his scraps. I started purposely putting my baits in very different places than he did which resulted in some really great finishes for us. Matt’s current tournament partner does the same thing, but even better than I did, and they’ve made a killing around this area together. 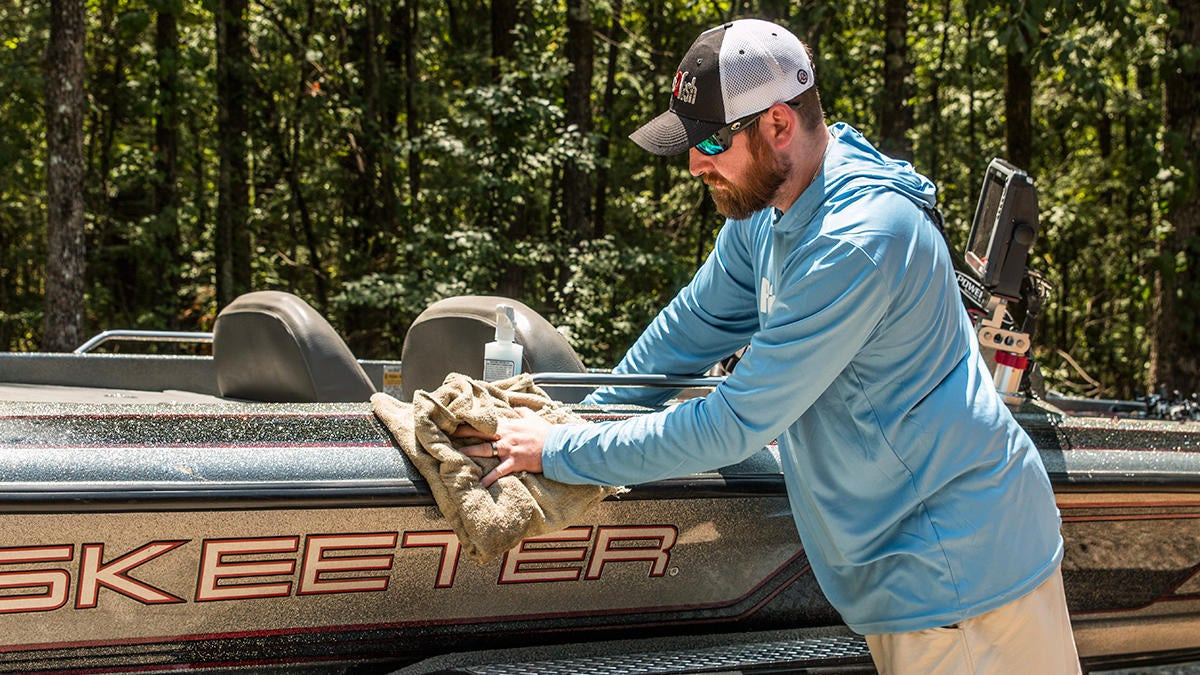 After being both a boater and co-angler for over a decade each, I want to be very careful how I word this as to not ruffle any feathers. But as a co-angler, whether you own your own boat or not, you’re a guest in someone’s boat. That person pays insurance, boat payments, gas, oil, tires-whatever the case may be. But owning a boat is really expensive and there are a lot of hidden costs to consider.

I always suggest bringing some cash with you whenever you’re invited to fish from the back of someone’s boat. I’ve done it since I was a teenager and there has only been a very small handful of boaters who have actually accepted it. But it’s the thought and gesture that matters.

I’m certainly not the golden child or trying to make myself out to be that way. I don’t play that game. But last week on my fishing trip with my buddy, I stuck $100 in my wallet and brought plenty of snacks. I wanted him to know how much I appreciate him taking me. He wouldn’t let me pay for anything, which I really respect. But it was the gesture that stuck with him.

When we put the boat on the trailer, I made sure to get out and dig out an old towel I found in his back compartment earlier that morning. As he went through his personal routine of putting the straps on, pulling the drain plug and what not, I wiped down every single water spot from his boat. Again, he didn’t ask me to. But I know what it’s like to be a boater and have your co-angler leave you high and dry and the boat ramp without offering any help.

My buddy actually told me, “Wow, you don’t have to do that. I’ve never had anyone do that for me before. You really don’t have to.”

I’d rather do more than less. Again, I want to go fishing with this guy again soon. So I want to be sure he knows how much I appreciate him letting me tag along. Words only go so far; actions matter most.

Whether you own a boat or not, you’re going to find yourself on the back deck of your buddy’s bass boat at some point in time. When I was younger, I used figure I’d get table scraps all day long, but the more I did it, I realized there are lots of opportunities to catch your personal-best bass as a co-angler. I’m certainly not the authority on it, but I really think the tips we’ve discussed will increase your odds of catching a bunch of big bass from the back deck.