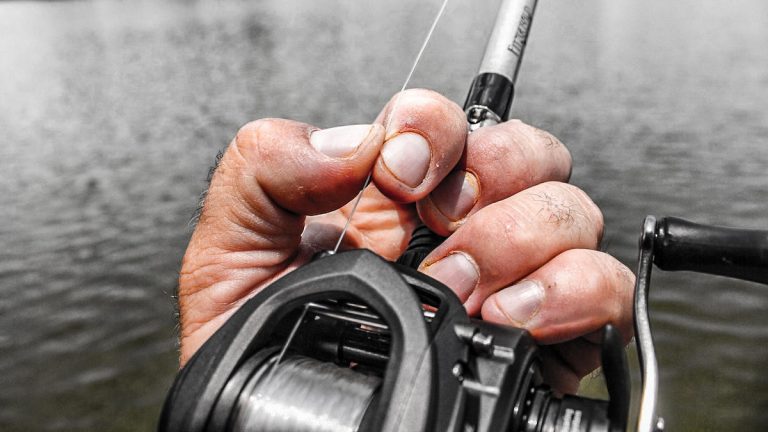 Whether you’re alone or have an extra set of hands, there are a couple of key things you need to do when spooling a fishing reel. We’ll get those out of the way first and then dive into a few ways to make spooling a reel by yourself a bunch easier.

First, almost all fishing line has some sort of memory. It may be minimal, like with braided line and some higher-end fluorocarbon, but if you just let the line fall off the spool, you’ll see some curl to it.

So you need to be certain that the line is coming off the spool and going onto the reel in the same direction. If you don’t, you’ll be fighting that memory when you cast your bait and find yourself backlashing and battling line twists far more often.

If you’re holding a baitcaster in your hand with the opening of the reel facing upward, the line will come into the reel, across and then under the spool as you turn the handle. So you want to be sure your filler spool is rotating in the same direction. If it is, the line will be coming off the top of the filler spool and not the bottom.

For a spinning reel, the same principal applies. Ironically, however, the spool of a spinning reel doesn’t spin. So you don’t want your filler spool to spin either. Instead, you want to turn the filler spool so you’re facing the flat side of it and the line is hanging down from the right side of the spool. You’ll see then that the line is coming onto your reel the same way it’s coming off of the spool.

The next thing you want to be certain to do with both baitcasters and spinning reels, is keep a little tension on the line as it is spooled onto the reel. The easiest way to do this is by sliding your non-dominant hand (left for right-handed reels, right for left-handed reels) up to the section of the rod just in front of the reel. Use your thumb and forefinger to pinch the line and provide tension as it enters the reel.

This will actually help take some of the memory out of line and make sure that the line pulls down tight to the reel as you spool it on. This is very important for minimizing backlashes. It will also help prevent your line from cinching down deep into the spool when you break off or do get a bad backlash. If the line closer to the spool isn’t wound on tight, the line above will cinch down into itselft when pulled hard.

Now that we’ve set the scene for properly spooling a reel, how do you do it by yourself?

Use your legs, knees, feet and toes 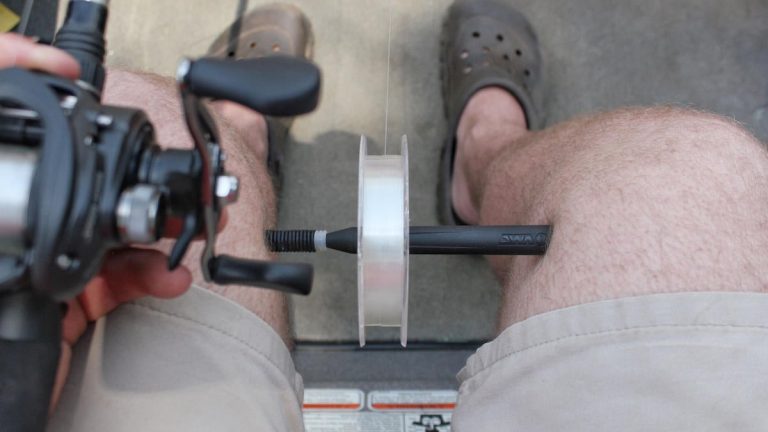 Probably the strangest sub-header I’ve ever written for a fishing article, but that’s one of the best and easiest ways to spool a rod by yourself in any situation. Take something cylindrical like a sharpie, pen, screwdriver or whacky rig tool, slip it through your spool of line and then hold that with either your legs, knees, feet or toes.

Again, make sure you start the spool off oriented correctly and that you keep tension on the line as it comes onto the reel, but something as simple as a pen between your knees does everything else you need it to do. It gets the spool out in front of the reel and prevents it from bouncing around and changing orientation.

Pegboard in the shop

I’m fortunate to have access to a nice shop where I have a lot of pegboard. I keep several spools of various line sizes on the wall so we can easily walk over to the wall and spool a reel by ourselves whenever we want.

Again, you have to make sure the spools are oriented correctly with the line coming off the top and keep a little tension on the line as it enters the reel, but other than that using pegs on a board to hold your line is pretty self explanatory. You just want to position yourself close to the wall so the line can go straight onto the reel. If you stand 10 feet from the wall and spool your line at an angle, you’ll be fighting the line as it tries to pile up on one side.

Throw it in the water 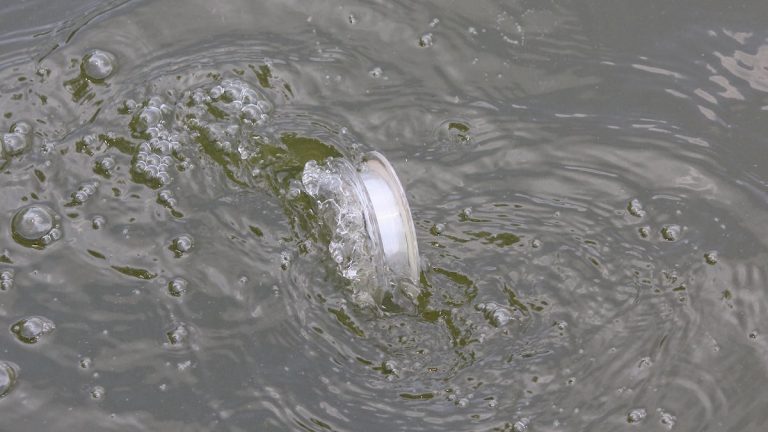 You can also spool your reel by yourself by putting the filler spool in water, whether that’s tossing it over the side of the boat while on the lake or putting it in a bucket or bowl of water in the shop. This method has been gaining popularity as of late, but it’s not my favorite of the three. The main reason being, some spools of line sink… fast. I found that out the hard way.

So while this is a far better option than just throwing the filler spool in the bottom of the boat, it still requires more attention than the other two methods and that’s why I prefer those. If you do choose to spool your reels this way, just make sure the filler spool is rolling in the water with the line coming over the top of the spool for baitcasters and that it’s spinning in the water for spinning reels with the line coming off the spool counterclockwise.

Whenever I have a choice, my favorite of these three methods is the pegboard. My favorite anywhere else is using my knees. If you want to get fancy, toss the spool in the water. But pay attention or else it could sink like a rock. However you do it, take advantage of the memory, keep a little tension on the line and you’ll be all set.