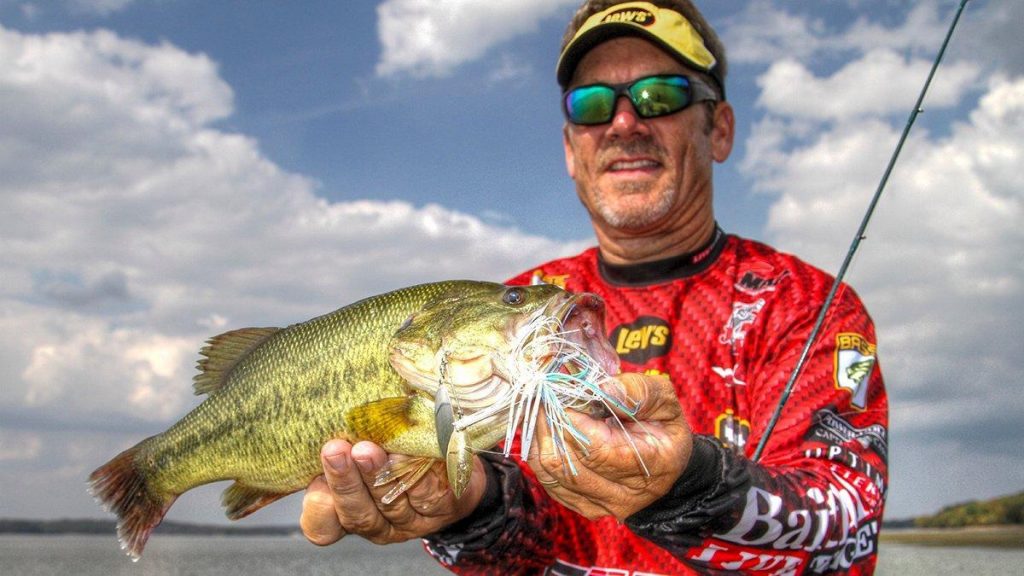 Grass mats are magnets for bass and bass anglers; but considering the fish don’t necessarily spend all of their time in the thick stuff, neither should you. The fact is that bites often await fishing a grass mat perimeter.

For example, when Bassmaster Elite Series pro Jason Christie approaches a grass bed in the morning hours, he doesn’t go right to the dense area. Rather, he’ll venture a few casts to the adjacent open water where bass often chase their breakfast.

In the cooler, low-light periods, bass often roam these areas flanking grass beds to hunt shad that pull out from the edges. Intensifying sun will quickly push the show into the grass, but you don’t want to overlook those early opportunities.

On the flip side, when grass lines see too much pressure, Elite pro Stephen Browning and FLW pro Todd Castledine know that easing off to the perimeter and targeting displaced bass with spinnerbaits and, even more so, jigs can yield big results with fish that depart the main cover and set up on isolated clumps of grass or peripheral wood. 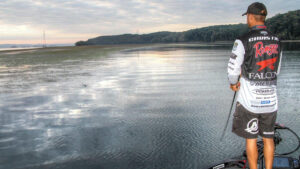 “I know most people are used to seeing this jig fished on the bottom out deep, but I think  this gives the fish a little different look,” Castledine said.

Varying his jig size from 1/2- to 3/4-ounce, Castledine said he judges depth and fish activity level when making that decision.

“I’ll actually use the 3/4-ounce Structure Jig a little more because I can get it down deeper and swim it faster,” he said. “That’s what I’m trying to do — cover a whole lot of water going down a bank, going down an edge. This jig just makes me a lot more efficient.

“I think a lot of times, when lakes are pressured, this different look is going to get you quite a few more bites.”

Confident with this presentation in any pressured scenario, Castledine finds upcoming seasonal transitions make it even more effective.

“I think in the fall, they like to suspend and look up,” Castledine said. “Swimming something they don’t see very often can get those bites.” 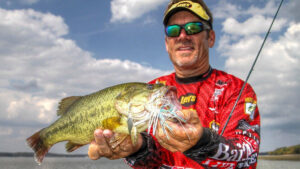 On the border of open water and grass mats, Browning keeps a spinnerbait handy for shad imitations, but he’s also fond of pitching to strategic spots with his signature series Jewel Baits Magnum Casting Jig with a green pumpkin candy skirt and a green pumpkin/blue Z-Man Bat WingZ trailer. This jig package mimics the bluegill common to a mat’s outskirts.

“When fishing pressure is high, I’ll sit on the outside edge and cast to isolated clumps of grass to pick off the fish those froggers have missed,” Browning said.

In many cases, a lot of these fish are looking at anglers’ backsides, as boats tucked close to the mat usually bypass any fish that have moved out to escape the constant hammering.

“I like to back out beyond where most of the people will actually have their boats positioned,” Browning said. “That allows me to put my bait in the area of where their boats are sitting.” 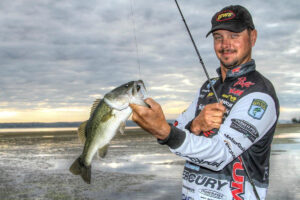 Browning also knows that working a mat’s perimeter puts him in position to tap into the supply line.

“I prefer to stay away from the pressured fish; I want those fresh fish that are moving out of the deep water and may be moving into this grass bed,” he said. “I’ll try to intercept them on a little subtle drop outside the mat. This is where the grass starts, not where it has matted up.

“Remember, the fish come from out deep to get shallow. They don’t all come off the bank to get into the mat. They have to come from behind you.”

As summer yields to fall, Elite pro Jordan Lee looks for fish to start pushing shad against grass lines like a cornerback corralling a fleet-footed receiver along the sidelines. Here, he likes simulating a food frenzy with a Strike King Spinnerbait with double willow leaf blades.

Similarly, Texas pro Troy Broussard will pull out a soft jerkbait and give the fish multiple looks.

“You can walk it, pop it, buzz it, or dart it like a topside jerkbait,” he said. “You can fish it any way you need to fish it to get the fish to react.”

Working baits around the openings often tempts anyone patrolling those openings.