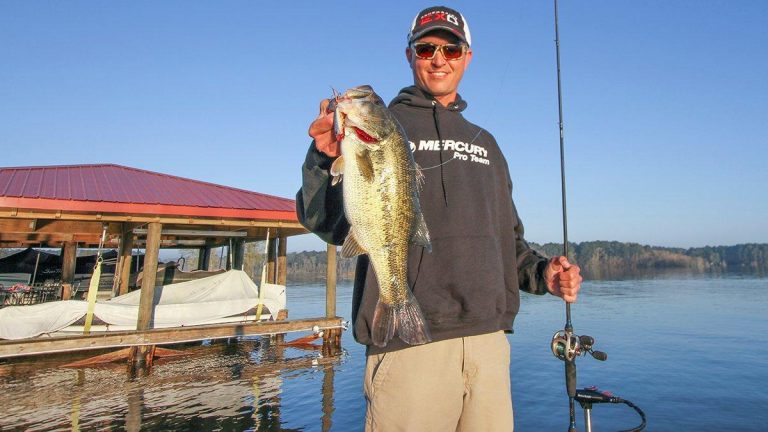 Flipping, skipping, shooting, shaking — the common dock fishing tactics lean heavily toward soft plastics, either as primary baits or trailers. However, you don’t want to overlook those hard baits. From topwaters to squarebills; these presentations should occupy a prominent position in your game plan.

FLW pro Terry Bolton flips and swims plenty of jigs around docks of all sizes and styles, but he knows he knows he’s not the only one doing so. The fact is that dock fish, like ledge fish, tend to get wise to certain baits of high frequency.

“Fish get jaded by seeing the same lures over and over again,” Bolton said. “Hard baits gives them a different action; something the fish aren’t used to seeing.

“They’re used to seeing spinnerbaits, buzzbaits and things of that nature. By the time you get into fall, the fish get pretty lure educated.” 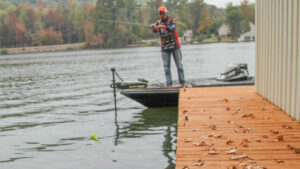 This different look becomes doubly beneficial as the forthcoming shad-chomping frenzy steers a bass’ brain toward a certain profile and motion. Hard baits do a good job of mimicking this favored look.

“Reaching into those shady areas takes a little practice because of the treble hooks,” he said. “They’re a little harder to get in there, they get hung up a little more and a lot of times you have to go fetch them if you make a bad cast.

“But those baits can stay in the shaded strike zone with more enticing action.” 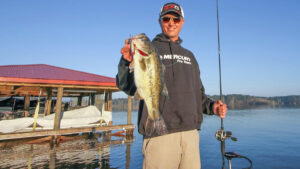 “That time of year, the fish in a lot of the lakes are oxygen starved,” he said. “The lakes are starting to turn over in some places, so the fish are suspended a lot and they love to feed up.

“When it gets tough, a lot of guys make the mistake of wanting to slow down and fish worms, but the fish are scattered and they want to feed at the surface. So you have to move water and keep a bait above their head.”

Splitting his time between walking baits and poppers, Ashley likes bream colors to match the panfish nibbling algae off the dock floats; but he’ll also get his shad on with a bone-colored bait. Either way, a couple of dress-up points aid his presentations.

“I always use a treble hook with white feather this late in the season because you’re having to work the bait slower and that feather gives it a little more action and gives them an aiming point,” Ashley said.

“You can throw that bait under a boat dock walkway, and while a lot of people would just reel that bait straight out, you can reel the bait two times to cause it to go down and wiggle, stop and allow it to float up. You can almost fish that bait like a floating jerkbait and give it a wounded, erratic action.

“Also, it will stay in that strike zone a little longer and aggravate a fish that might be in there.”

X-Rap Prop (click here to see colors): “We talk that late summer-fall being a shad bite, but I think a prop bait does a good job of imitating a bream, so you kinda get the best of both worlds.

“I’ll start out fishing with a jerk-pause, or a jerk-jerk-pause. But if I get into a good shade pocket, I throw it in there, jerk it once, let the props move water and allow it to sit. It takes a little patience to actually wait for the rings to die down. But if I get into a really good area, I’ll fish it slowly.”

Tossing that prop bait under a walkway is always a bet because of shade, but if fish are busting shad in adjacent open water, sputtering through the fracas can be just the deal. Bolton especially favors platform docks with built-in boat slips that allow him to keep his bait in the strike zone longer.

X-Rap Pop (click here for colors): A real enticer, this smaller bait usually requires a little more clearance, like a higher walkway. Here, Bolton will give it two to three rapid pops to pull it next to a dock post and then let it sit for several seconds before repeating the cadence.

“I usually like the prop bait when there’s a little more chop on the water, but the popper works best when it’s a little calmer.”

Preferring fluorocarbon for his squarebill, Bolton throws his prop bait and popper on 20- and 15-pound Sufix Superior monofilament, respectively. He’ll throw the latter on a Lew’s Custom Series jerkbait rod because the extra flex helps him send the light bait into the shadows. 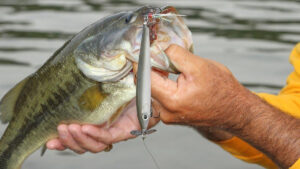 Ashley favors floating docks, but stationary will work. The key, he said, is location.

“A lot of guys want to fish every dock in a creek, but you’ll waste a lot of time fishing the wrong stuff,” he said. “Look for a dock sitting on a flat, something with 5-6 feet of water on the front of it.

“It doesn’t matter if it’s a main lake dock or in a creek, as long as it’s the flat side, not the channel side. That’s where those bream want to be and that’s where the bass want to be.”