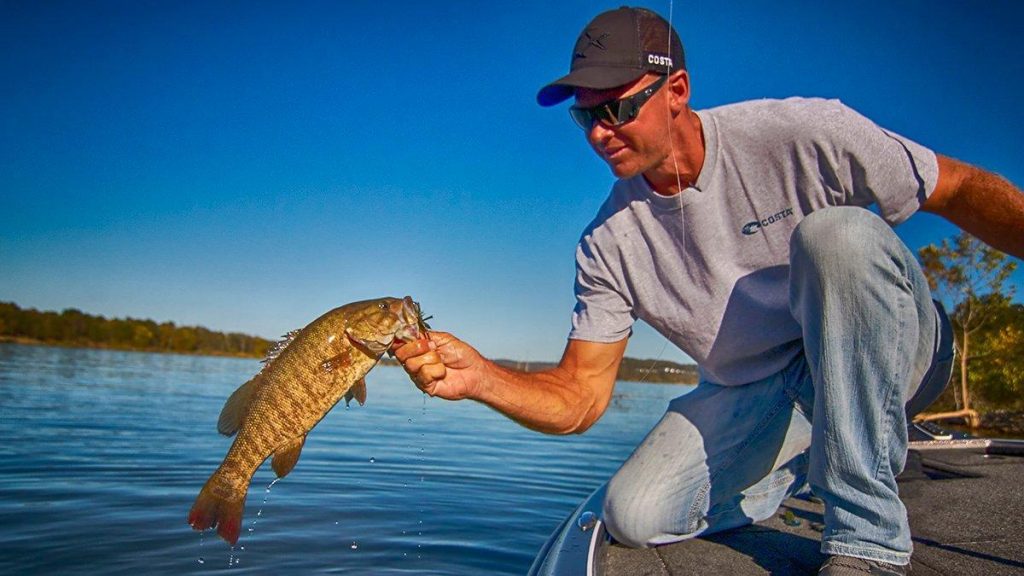 I won’t tease you all article about the one mistake anglers make in fall bass fishing. Instead I’ll tell you first and then explain the rationale with the help of a bunch of guys I spent time in the boat with recently. The biggest mistake bass anglers make in the fall is fishing too slowly which means they don’t fish enough water.

I talked about this topic with several very good anglers while fishing a very tough Table Rock Lake a couple weeks ago and their insight matched my successes and failures in fall bass fishing so I figured I would share with others what a collective of good anglers thought on the subject. Especially since this seems to be a time when a lot of good anglers struggle to consistently catch bass.

Why this is a problem when fishing in the fall

This year I’ve had some of my biggest and most memorable catches fishing on Kentucky Lake. Which is odd because most of us believe the lake is in decline. But we had big strings in the winter on jerkbaits and swimbaits. We had big limits shallow cranking in the prespawn. We had big limits during the spawn on buzzbaits and plastics. We had big strings flipping bushes and big limits fishing the ledges. So why is next to impossible to catch bass in the fall here right now? The same reasons it’s tough to catch bass all over the country on many fisheries this fall.

The easiest answer is the bass do not group up as much in the fall as they do other seasons of the year. Sure they will pile into the backs of creeks and bays on bait at times and you can have a blast when they are back there working bait. But for the most part the bass spread out and become very nomadic on baitfish which are even more nomadic in the fall. So even if you do find a group in a spot, they often won’t stay long because the bait often meanders off.

In the winter the bass group up out deep. They move shallow and stage in the prespawn in areas. Then they spread out in the spring to spawn, but because so many fish come to the shallows, the fishing gets really good in areas. Now in the post spawn they can get really spread out and leery like they are in the fall. But they will eventually group again offshore in the summer and can be a catch fest again. But, for some reason, the bass are the most nomadic they are all year in the fall. 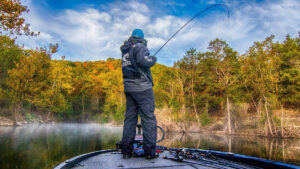 How to handle the scattered bass problem

“I want to fish fast all the time, but that’s especially true in the fall,” said Costa pro Todd Castledine of Nacogdoches, Texas. “The fish are up and scattered and moving with with the bait. So I want to see as much water as possible in a day’s time.”

Castledine and tournament partner Russell Cecil, another bass fishing hammer from Texas, had to come to Table Rock for a Costa media shoot and decided to jump in the Toyota Bonus Bucks Owners Tournament since it was the weekend before the shoot. They got 4 hours of practice on the lake and in that time basically figured out what was going on shallow.

“We saw enough fish swim off, follow our baits and show themselves feeding on bait to know that’s where we needed to focus our efforts,” Castledine said.

So they ran some of the places where they saw fish and then patterned what they thought were the types of areas that were holding the fish. While the fishing was incredibly tough, the duo was able to catch enough weight to finish second in the event with 4 hours of practice.

“We would switch back and forth between search baits and target baits,” Cecil said. “We would burn the banks with swimbaits, and then if a good looking piece of cover or a dock came along, we would pick up the Strike King Structure Jig and pitch it to specific targets and move on.” 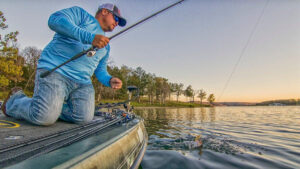 James Watson has won a good chunk of change bass fishing in the fall, including a BASS Open on Table Rock in October of 2015 and the Norris Lake FLW Tour Invitational in October of 2016. So I was all ears when he started talking about his bait selection for fall bass fishing.

“I want to fish lures I can cover water with quickly,” Watson said. “Everyone knows a topwater is good in the fall and you can catch a pile of bass on a Spook. But I actually prefer a bait like a buzzbait, or my favorite is the River2Sea Whopper Plopper. If you look at a Whopper Plopper and watch one retrieve with that versus working a Spook or other walking topwater back with a walk-the-dog retrieve, I can make 3 casts and retrieves with the Whopper Plopper in the amount of time an angler can work the walking bait back to the boat once.”

“A wake bait is overlooked by a lot of anglers,” Castledine said. “I like it because I can fish it fast and trigger those aggressive fish. That’s really what you’re looking for when you’re running a lot of water and trying to run new water every day. You want a bait you can fish fast and get the most aggressive fish to react. I feel like I can be more productive running the water fast with a bait like the Strike King Wake Shad.”

All the anglers keep a jig on the deck too. As they speed down the banks or across big flats, they will pick up a jig and cast to a good looking piece of cover. 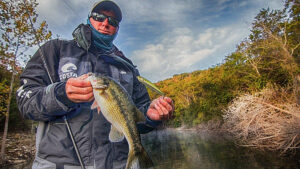 “I want to run as far up a creek as I can,” said Elite Series Rookie of the Year Dustin Connell. “I think those are the easiest fish to catch if you can get away from the other anglers. But I also find some of the most aggressive and biggest fish up in those creeks, just running dead center up a gut with something like a topwater or a lipless crankbait.”

And the good thing is if you run up a creek, you will often find the fish on the most likely looking places because the options for bass become more limited. It’s similar in clear water. A bass can see your bait from a lot farther away in clear water, so you can run a lot more water faster in clear water.

This past weekend I was fishing and got in the back of a creek so far, my trolling motor was stuck on the bottom. About that time, I saw some fish waking in inches of water a long cast away from the boat. I couldn’t go any farther back and bombed a cast out there with a swimbait and immediately hooked up with a 3-pounder.

When you find the fish doing that you can often speed up your search and just run to the backs of creeks and fish the last half of the creek fast and blow on to the next one. You will start to break the pattern down even more as you go.

“We found those fish on the sides of banks leading into little cuts,” Castledine said of their pattern on Table Rock during the Toyota Owners Tournament. “The fish were not on the points and not in the very backs. They were on the sides leading in. When we figured that out in practice we really started running water fast and ran a lot of new water the day of the tournament. It actually made me mad that we had to leave after the Costa event because I felt like I was just scratching the surface of figuring this thing out completely.”

And that is what keeps us coming back even during the tough bass fishing you often find in the fall.