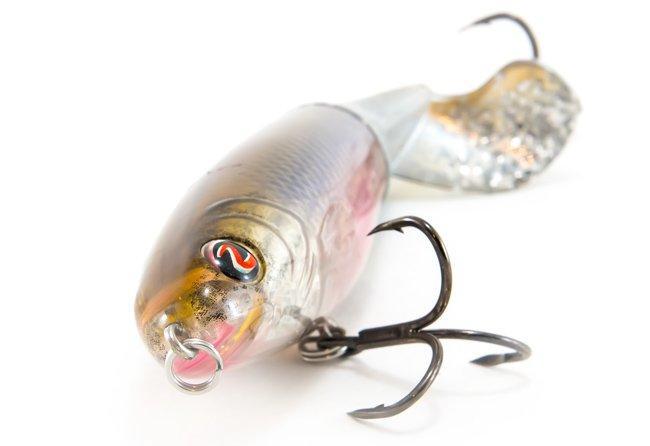 I love finding lures off the beaten path that work for the species I pursue. I’ve caught some very large bass fishing for stripers, muskies and other species with larger than average lures. One lure I stumbled upon was the River2Sea Whopper Plopper. Originally designed for musky fishing, the Whopper Plopper is a unique bait in the way it performs on the water and the attraction it has to upset fish. Here are four things I found interesting about this lure: 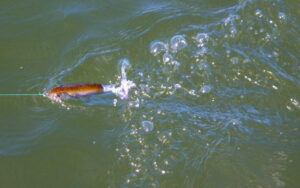 A bait both subtle and violent

The Whopper Plopper has two body sections. The front section is like a standard pencil-shaped walking bait. The back section is similar except for a cupped molded plastic tail and the fact that it’s able to spin around the wire harness of the front half. So with a jerking or steady retrieve the cupped tail, causes the hind end to spin around creating a turbulence in the water similar to a buzzbait. It differs from a buzzbait, however, in that it floats and it can create a much more violent action on the surface with an aggressive retrieve. The slower you reel, the quieter and more subtle its turbulence. The harder and faster you reel, the more it kicks out water and gurgles with a rapid “plop, plop, plop” sound.

The 130 bait size is a bit larger than your standard walking baits both in length and diameter. I like this because I’m able to target bigger more aggressive bass with this profile. The bait comes in a 90, 130 and even 190 size. The 190 was the original musky size, and I’ve heard through the grapevine that guys secretly throw this for big bass on some of the lakes with larger than average bass around the country. I fished with 130 the most and found that 2-pound bass ate it just as well as 7-pound bass did. The colors are okay on the bait. They are mostly loud obtuse colors like rainbow trout, perch and silvery baitfish imitation like Monkey Butt. I do wish they had some more translucent shad colors and a more natural white one as well, but their Bone and Munky Butt colors caught bass pretty well in the testing. 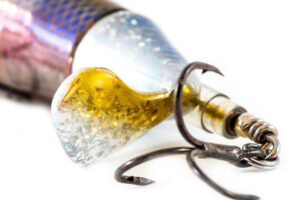 While it acts more like a buzzbait than a big walking topwater, it does have one distinct advantage over a buzzbait in that you can stop it and it will stay there. I also like that I can get it around a piece of cover and rip it and cause some spray without moving it too far out of the strike zone. While a steady retrieve is often preferred, I do like that I can stop the bait when I want and do some other things, especially in those cases where a fish might miss the bait. 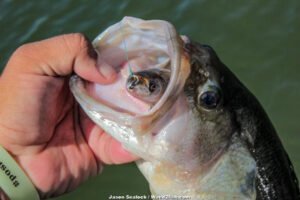 I throw a topwater a lot. And I have pretty bad arthritis in my hands. So working a walking lure or even a popper all day can really wear me out and put me in a lot of pain days after. One thing I thoroughly enjoyed about the Whopper Plopper was that I could wind the bait effortlessly with almost no torque on my hands or wrists and still cover a lot of water efficiently. The 130 size weighs more than an ounce so I recommend using strong line and a medium heavy rod to sling it around. Because of its weight, though, you can lob it a country mile and cover big expansive flats and points in a hurry. It’s very neat bait and quite honestly one that at first glance I scoffed at. I found that it gives me another option to mix in with my topwater patterns over the course of the year and catch some of those fish others might be missing. You can find the River2Sea Whopper Plopper online at tacklewarehouse.com and also at retailers that carry River2sea products, as well as the river2sea.com website.