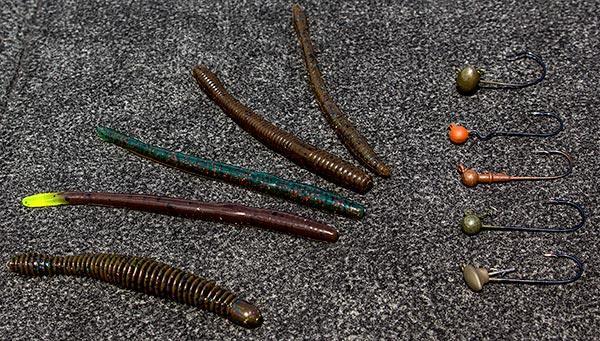 I tend to believe bass, while not nearly as complex in feeding habits as us, probably go through a period where they are thinking, “enough with the shad already.” How about a nice crawfish etouffee or a bluegill sandwich? Seems a snack of difference often satisfies us more than a snack of substance. Makes me wonder if that’s what drives a bass to hit something other than a minnow type forage with an overabundance of said forage especially when fall fishing.

But one thing for sure, they will eat something that doesn’t look like a minnow, shad or other baitfish right now. Some will chalk it up to full moon and crawfish activity or maybe an abundance of alternate food sources or alternate predators that may drive bass out of areas that have baitfish.

The why and where

We recently spent some time fishing with a lot of different pros on several different fisheries and picking their brain about fall patterns and winter patterns and finding bait to find bass. This is a time of year when bass feed heavily as they fatten up for a long winter and slower metabolism that not only causes them to eat less, but shuts down the frequency in which they eat. So right now they are eating everything in sight.

That’s a key thought in using other non-baitfish type lures. Bass are eating whatever is put in front of them. So you can target them in feeding zones and put something in front of them they are not seeing over and over again.

Jonathan Newton has been fishing the TVA Lakes in Alabama since he was old enough to hold a rod. He’s logged thousands of hours on Pickwick, Wilson, Wheeler and Guntersville. He’s won a major event on Kentucky Lake so he’s intimately familiar with the baitfish migrations on the lakes and the feeding habits of the bass around them.

But I find it interesting on a recent day fishing with Newton on Pickwick Lake, that he reached down on his deck and picked up â€¦ a shaky head. Before I lose you, stick with me for a minute and humor Newton and his theories on why it gets under fished this time of year and why it’s such a producer for him when most other anglers are throwing flashy, shad and minnow imitating lures.

Two very good questions and one anglers should contemplate when fishing in the fall. The forage has been spawning all spring and summer and now there is an abundance of baitfish that you don’t have earlier in the year when colder temperatures make it harder for them to survive. Then from March to hunting season, the bass have been bombarded with everything under the sun, not to mention the meteoric rise of the castable umbrella rigs pushed through the winter interrupting the normal vacation the bass get from fishing pressure.

“The one thing I’ve always believed about a shaky head, is the bass just don’t seem to get accustomed to it,” Newton said. “It’s diminutive, looks  natural, looks like a safe snack for a bass. He’s look up at all these shad from his laydown, then a natural looking worm drops in his lap. He doesn’t have to chase it or run it down. He just sucks it in and starts looking for his next treat.”

Truer words have never been spoken. Bass are opportunists. Sure they’ll go crazy chasing shad around, but they won’t say no when an easy meal drops in their lap.

Newton likes the natural presentations of a shaky head and a jig this time of year to give the bass something different but also something that looks very natural so that it solves both the over abundance of bait dilemma and the fishing pressure dilemma. And his approach is fairly straight forward.

“I’m targeting those feeding zones that have identifiable targets like shallow wood or maybe current seams in the tailwaters,” Newton said. “Places where the bass still ambush prey that I can easily target and show them something natural.”

Newton fishes his shaky head  on braid on a spinning rod with a fluorocarbon leader he ties with a double-uni knot. And the combo gives him good strength and leverage over some of the bigger bass he has caught fishing wood in the fall. The bass are there and it seems like sometimes he’ll fish a jig on the shallow wood without many bites then pick up a shaky head and catch bass on his first cast, and often big ones. It’s like they’ve been pressured and conditioned and the shaky head is just something they don’t condition to easily.

He fishes an 1/8-ounce Giggy Head with a Zoom Trick Worm in green pumpkin. If the water has a little color, hell add a touch of chartreuse to the tail. He fishes the worm slowly, shaking it often to entice bites around cover.

On a recent cold morning we fished the edges of current in the tailraces of Pickwick dam, we threw crankbaits, topwaters, spinnerbaits, jerkbaits and more at the bass, and didn’t catch many fish that morning. But when the action slowed, you could pick up a shaky head and catch several more bass. It was actually somewhat surprising given the vast amounts of baitfish everywhere.

But you could drop a shaky head and the Zoom Trick worm into a slack spot out of the current and shake it around and one would snatch it up off the bottom.

The jig has also been a great bait this fall and many falls. We caught a lot of bass off docks this fall and isolated brush, wood and rip rap areas with a jig. Again the bass are plying around in these areas looking for easy meals and a jig ticking along the rocks or wood makes for a quick and inviting snack for a bass weary of shad and shad imitating lures.

Newton likes a homemade 3/8-ounce jig with a Zoom Super Chunk trailer. He doesn’t get overly fancy sticking with staple colors like brown, green pumpkin and black and blue.

We like casting jigs as well as flipping jigs around cover and rock. Green pumpkin with subtle accents like a few strands of blue, chartreuse, orange or even purple are hard to beat. A Zoom Super Chunk is also our go to trailer when the water cools. It seems like the cooler the water, the more a chunk type trailer works well rather than a swimming clawed trailer. It’s a lot more dragging and crawling in the late fall than swimming like summer and early fall.

Newton fishes his jigs on 15-pound fluorocarbon sometimes going down to 12-pound in clear water where there isn’t as much cover. He uses a medium heavy rod a high-speed baitcasting reel.

Whether he’s targeting bluffs, shallow wood, current breaks or other likely feeding zones in the fall and early winter, Newton always has a jig and a shaky head on the deck to tempt the bass with something else. He catches a lot of bass on those other baits, but on tough days when the bass are heavily pressured, these natural presentations yield a lot of positive results.