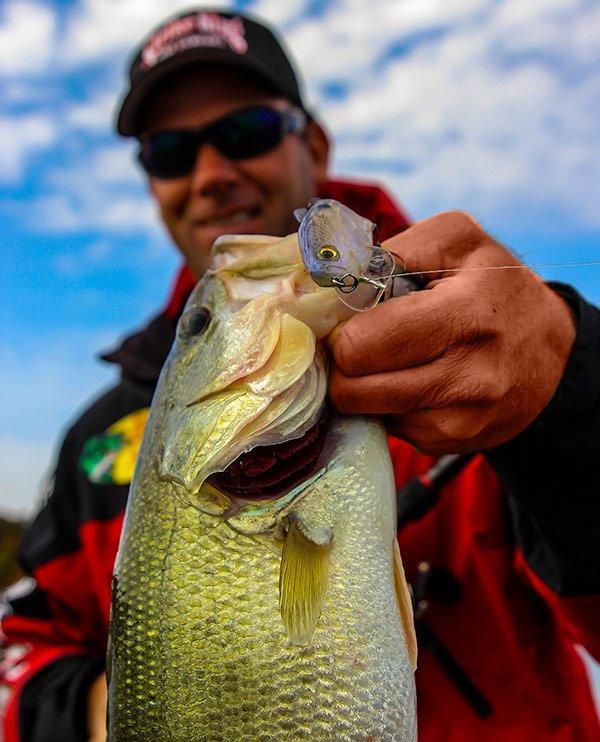 Bass fishing changes us as much as it makes us complacent. We go from one hot technique or lure to the next but in doing so we can also find we neglect a lot of tackle when we have success with other. Maybe we had a hot bite last fall on a lipless crankbait in the backs of some creeks, so we fire out onto the lake armed with our favorite vibrating rattler only to find out this isn’t last fall

To that end we try to gain fresh perspectives from proven anglers for no other reason than to give us all some crafty ideas to fool bass, who, let’s face it, have seen their fair share of fishing lures all spring, summer and fall. They are a bit smarter and maybe a little more weary. It can be the time of year when being aggressive or subtle can change the outcome of a fishing day. But for the most part it’s a time to get out of the rut of your same old fall routines.

One technique that we see a lot of pros implement in the fall but we don’t see as many recreational anglers try involves v-waking a topwater minnow, swimbait or crankbait along the surface of the water. Anglers have fished wake baits for years. The Mann’s Baby 1-Minus has been a dominate wake bait for decades as has the Bomber Long A. But nowadays there are some new twists on the wake bait technique that give anglers a lot more options on profile, cadence and presentation. 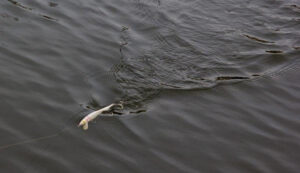 The allure of the “V”

Behind the success of wake bait fishing, especially in the fall is the V-shaped wake that a plug creates when reeled along the surface. The buoyancy of a bait really determines how fast you can move the bait and still create the signature V that is critical to having success in wake bait fishing.

Different anglers may debate the many nuances of the trademark V made by a wake bait along the surface, but for us it’s a simple fact that many times, a baitfish in distress is as high in the water as he can be swimming as fast as he can, creating a turbulence behind him, much like a tugboat pushing a barge down the lake. The turbulence and the V of the pursued bait triggers bass. It’s an impulse thing.

A bass feeding on bait often looks up especially in the fall of the year. That one bait fleeing off by itself leaving that V wake behind it gives the bass something to hone in on from great distances. This makes this a staple technique in clear water because the bass gets a good bead on the bait from a great distance, and the truth is the bass rarely misses the wake bait when he rolls on it. The V is a homing beacon for the bass if you will—an illuminated sign that says “Free Shad Pie This Way!” While shad pie doesn’t translate to you and I like chocolate cake does, it apparently brings the bass a swimming. 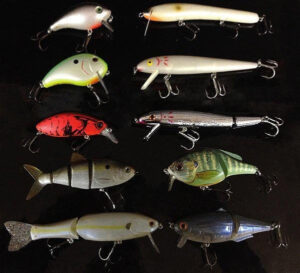 Like with any other technique, the market is saturated with many artificial fishing lure options to tempt hunting bass. Basically we boil the tackle choices down to three options – crankbaits that wake, minnow baits that wake and swimbaits that wake.

We mentioned the Long A, a long standing minnow-style plug that has been a staple on clear-water fisheries for a long time. The subtle slow rolling, wobbling action of a Long A being pulled across the surface almost has that “dare-you-to-bite” me appeal to it. It’s not trying to get away, almost like it’s not afraid of the bass. And that’s something a big bass just won’t tolerate. He’s eaten to many minnows not to have everyone tremble in his presence.

The Cordell Red Fin, Buckeye Lures Wake Up, and the Bomber Long A are the staple wake baits among most pros. Jimmy Mason, an avid wake bait angler, has a lot of success in the fall with a big Redfin or Long A depending on the fishery.

“I love a big Red Fin for this technique. A C-10 is a huge bait and the best part is you can cast it so far. So when fish are coming up and killing bait, you can stay way off the fish and just wind it through there real slow. They can’t stand it. The hits feel like the bottom of the lake fell out because they suck on it so hard you feel the water drop out and bait feels like it falls for a second. I love that bite!”

On a recent outing on Pickwick Lake, Mason slammed two big largemouths on nearly back-to-back casts with his big bone-colored Red Fin. The strikes were savage but the hook up was immediate and they were at the end of long casts.

The next category of wakebaits includes round-bodied crankbaits like the Mann’s Baby 1 Minus. There are several good wakebaits on the market like the Ima Roumba, Lucky  Craft LC Wake, Megabass FX Knuckle 60, Deps BuzzJet, and others from Jackall, Bandit, and more. The round-bodied baits can give you a bit smaller profile, can be worked a little faster and often can be more precise casting for working the wake approach around shallow cover like laydowns, grass and more.

The final category of wake baits involves the new trend in swimbaits in fishing tackle. These jointed baits feature more lifelike baitfish profiles with hinged sections and usually a down facing lip that forces water off it hard and gives it a high-riding radical side to side S-motion.  Baits like the Strike King Wake Shad, Koppers Live Target Scaled Sardine and Bluegill wakebaits, as well as several floating swimbaits like Bull Shads, Spro BBZ 1 Floating Shad, and the Jackall Dagored.

We recently watched Kevin VanDam pluck big fat aggressive bass from grass flats on a very windy day with the Strike King Wake Shad. He confessed that it’s become a go-to bait in the fall on fisheries with a lot of sparse grass that have large bait populations like the TVA Lakes in the south or the South Texas and Florida fisheries with big bass in them.

“It’s such an overlooked bait,” VanDam said. “The Strike King Wake Shad is made to fish real aggressively. I can fish it real fast and even if it gets in some grass, it just comes through it real clean and that leads to a lot more bites for me. That aggressive action really attracts some big bass and when they hit it, they just absolutely crush it. I can throw it a long way and cover a lot of water really fast which is a huge advantage when I’m covering an expanse of grass in one area of the lake.” 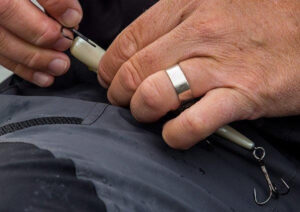 Tweaks of the trade

It was interesting to talk to anglers over the years about wake baits and look at the baits they use more often than not. What I found out was there is a lot of manipulation that goes into a wake bait before they find it’s “just right.”

Having a good wake bait means you can cast it pretty far, it stays up on the surface, and it sort of rolls and meanders along steadily with some side to side flash to draw the fish’s center of attention.  Some baits you have to work them slow or they will start to dive on you and there is no V when the bait is completely underwater.  At least part of the bait has to break the surface to create the V effect.

So making a bait more buoyant leads to many of the tweaks you will see.  An easy first tweak, according to Mason, is scraping the paint off of the bait.

“Many manufacturers use a metallic or heavy paint and sometimes scraping the paint off a bait like the old Long-A will allow it to sit higher in the water.”

Mason also likes to change out the stock hooks on his big baits. They often have big heavy saltwater hooks on them, which he’ll replace with thinner Mustad Triple Grip hooks. This weight reduction will also float the bait a little higher. He’s also heard of guys drilling a hole in a bait to get the bb’s out of it and then epoxying the hole back with filler to take further weight off the bait. Mason however prefers the rattle of his Redfin for calling fish from distance and helping the hone in on it on windy days.

The final tweak we found interesting was boiling the baits to make them expand slightly. The expansion makes them a bit more buoyant as well. Mason cautioned however to never boil them more than 30 seconds as the bait can warp and even crack and to let it cool naturally to avoid both. 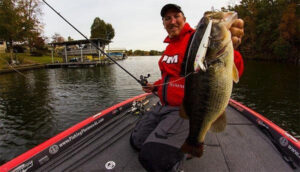 Mason and VanDam have obviously put years into honing their wake bait applications, but we can get you started and speed your learning curve thanks to some of their tips.

Use spinning gear on lighter wake baits. A Long A can be hard to throw far on baitcasting gear and heavy line. Instead Mason will opt for small diameter braid or mono on a spinning rod and reel to get maximum coverage with the lighter wake baits. Whereas a baitcaster and heavier line will give you more control over the big swimbaits and larger minnow wakebaits.

VanDam really prefers his Wake Shad around vegetation. Fishing down weed lines, around sparse clumps and even down lanes of open matted grass yields some savage strikes from bass who’ve seen tons of spinnerbaits, plastics and frogs. The nice thing is the bait comes through the weeds so well hardly catching the grass.

Mason catches a lot of fish on seawalls, around docks, over points on clear lakes especially lakes with standing timber and on shallow flats in clear water where bass are known to school. When the bass have a lot of shad to contend with, a wake bait seems to draw some strikes where other topwaters barely get a sniff. And often times you get larger than average strikes than with other baits that might be working.

The key to being a good wake bait fishing is simply making long casts, focusing on keeping a steady V cutting across the surface and casting to likely targets or where you’ve seen fish come up and kill on baitfish. The biggest key can be just to throw it where the fish quit striking your other topwaters and showing them something different.