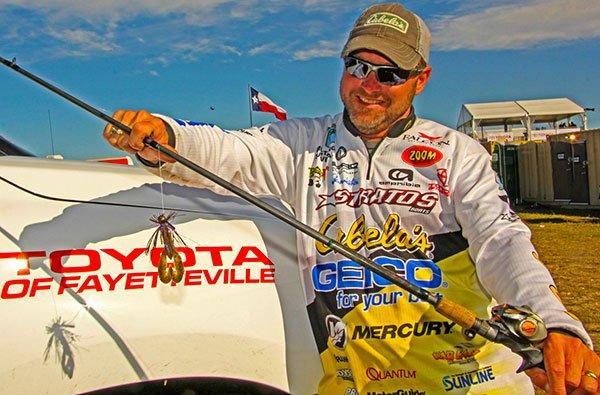 You wouldn’t expect a guy nicknamed “Pee Paw” to place speed at the forefront of his autumn angling success, but in the weeks surrounding Halloween, there’s no clowning around when 6-time B.A.S.S. tournament champion Mike McClelland hits the water.

The 45-year-old class-act from Northwest Arkansas shared the lures he reaches for in the peak of football season, and three of them are rather fast moving.

Hear are his four fall choices in no particular order:

Spro Fat John â€“ “This has become my favorite fall crankbait,” say McClelland. “I throw it these days in place of the real small balsa baits that I used to throw around shallow wood and rock because it’s extremely buoyant and avoids getting snagged around thick cover.”

Notable is the fact that he pairs his shallow crankbaits with a fast reel. “A lot of guys crank with a 5.3:1 reel, but I use a really fast 7.3:1 Quantum EXO 100 because experience has taught me that bass want a crankbait to move fast in the fall. While a 5.3:1 is great for spring, and getting big baits deep in the summer, a faster gear ratio gets me way more bites when cranking in the fall.”

Paired with 12-pound SunLine, McClelland can get the Fat John to run at least 6-feet deep, but typically he throws it on rocky banks and isolated wood in less than 3-feet of water using line as meaty as 20-pound test.

“I use the Bass-X brand in weights ranging from 5/16 to 1/2 ounce, but the 5/16 gets the majority of the work done,” says McClelland.  “That little jig will catch ’em year ’round, but it really shines around boat docks in the fall.”

“I vary my jig trailers a lot with “The Little Brown Jig”, ranging from Zoom’s finesse-like Critter Craw to their larger Baby Brush Hog, until I figure out what gets more bites. I can’t emphasize enough how important it is to vary your trailers â€“ it can make a huge difference,” emphasizes McClelland.

Double Willowleaf Spinnerbait and a Buzzbait â€“ “I’m always going to have both a ½ ounce War Eagle spinnerbait – and a buzzbait – tied on at this time of year â€“ and really, they go hand-in-hand,” says the winner of $1.5 Million as a pro.

“It’s all about shad at this time of year, and both these baits will get bites as long as there are shad present,” he says “The key is to make sure the shad you’re fishing around are big gizzard shad. You’re likely to see lots of shad in the fall, but it seems like you’ll get more quality bites when you’re around bigger gizzard shad,” he emphasizes.

Sticking to Pee Paw’s theme of moving quickly, he reiterates that buzzbaits and spinnerbaits both allow you to cover a lot of water, whether you’re moving down a row of boat docks, or a bare, wind-blown, shallow shoreline.

As far as blade colors are concerned, he chooses gold more than silver for buzzbaits, and a combination of gold and nickel on his spinnerbaits.

McClelland advises that Halloween doesn’t signal the end of these lures’ goodness. He’ll be using all four of them until water temps hit the high 40s in early winter in America’s Heartland. Just don’t count on the amiable Arkansas pro to dress in a Santa Claus suit for advice on how to catch Christmas time largemouth.