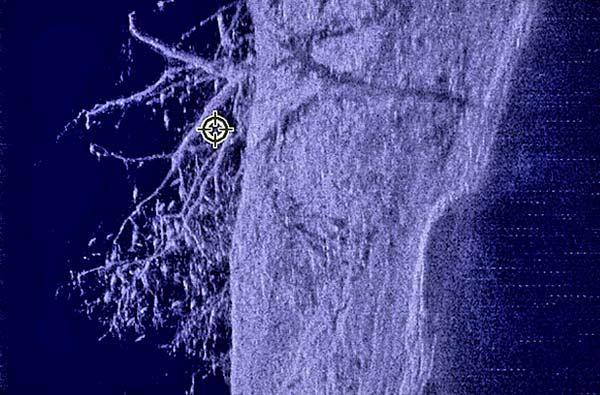 Fishing pro Tommy Skarlis is no stranger to seeing his name on the top of tournament leaderboards. But what stood out about the Waterloo, Iowa, native’s latest first place – along with partner Kyle Steinfeldt during the recent 2013 Crappie Master National Championship on Mississippi’s Lake Grenada—was the species of fish the duo were targeting.

That’s because Skarlis is well known for decoding the wily ways of walleyes for top finishes in tournaments, not crappies.

Anglers can place the cursor over cover discovered with Humminbird Side Imaging, magnifying it for a better look. In this case, notice the number of crappies huddled in and around the wood. The unit will also reveal how far that cover is from the boat, an important part of Skarlis’ winning trolling routine.

But after a two-day limit of 14 fish for a total of 27.83 pounds, it was obvious to others in the tournament that Skarlis and Steinfeldt knew more about catching crappie than they let on before launching.

“Before the tournament, I could tell you what walleyes look like on Humminbird Side Imaging with my eyes closed, but must admit we both had to learn what made crappies stand out from the crowd while we were pre-fishing for the Championship,” Skarlis acknowledged. “But it really only took moments of on-the-water time to decipher what the Side Imaging technology was telling us, and soon we were able to come up with the winning technique because of what we could see on the screen.” 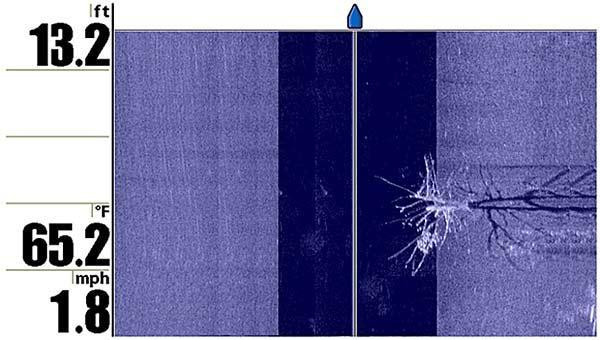 Skarlis says that thanks to Side Imaging he and Steinfeldt found small pods of crappie here and there, but not everywhere, suspended 8 to 12 feet down over 14 feet of water. So instead of doing what most other participants were doing—sitting still and jigging or casting to the isolated schools of fish—the duet decided to troll crankbaits behind planer boards—more known as a walleye tactic than crappie catcher—so as to pick off the most aggressive fish in the bunch.

But it was more than just locating fish. Side Imaging allowed them to surgically place their baits in the strike zone.

“We soon figured out that if we deployed the lures directly behind the boat, we’d never get bit. So we sent out the in-line planer boards as far as we could—which was still within the echo of the Side Imaging transducer—and then maneuver the boat so that the lures would run through the small schools, or come back around so we could make the ever-crucial pinpoint pass,” says Skarlis.

But it was not only a precise pass with ‘cranks—clipped with a snap tied to 10-pound-test monofilament and let out 50 to 100 feet behind Skarlis’ Off Shore planer board—that made fish bite, but pulling them at the specific speed of 1 MPH, which was dialed in via the readouts on their Humminbird units.

Wasting nary a moment between schools of fish, the two tournament goers would use the main outboard for a fast-pace pull while in search of fish. The moment crappies were spied on Side Imaging, they would quickly kill the main outboard and switch on the Minn Kota MK101/EM—a motor-mounted electric trolling motor—which allowed them to pull size-6 Flicker Shads and size-4 and -5 Salmo Hornets at the perfect strike-producing pace.

Skarlis says it’s hard enough for one crappie expert to out-gun another, let alone a walleye guy walk in and compete. But he admits that Humminbird Side Imaging allowed them to fish with the big boys of crappie. “It’s hard to imagine what both Side Imaging and new 360 Imaging can do for the average angler, no matter what species they target, open water or on ice.” 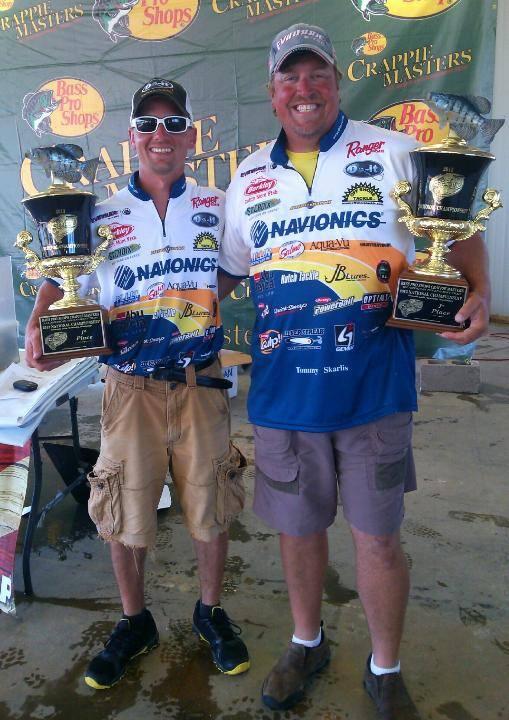