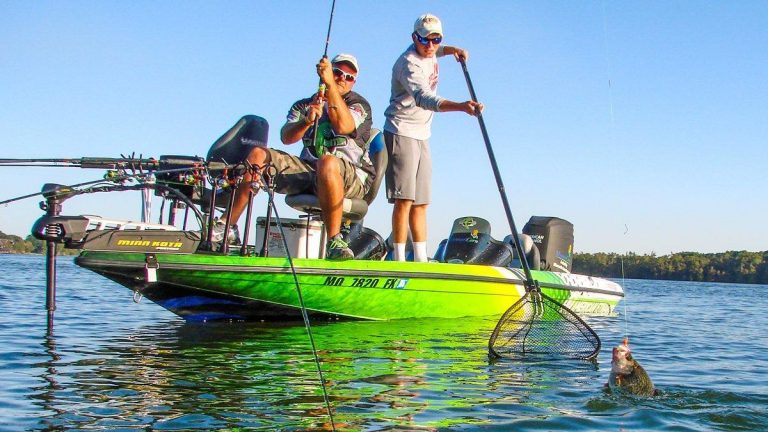 Spider rigging for crappie is the fastest growing tactic in the crappie fishing sport, and for good reason. With an increasing number of crappie fishermen realizing that spring is not the only, nor even the best time to catch crappie, spider rigging has revolutionized what was once a “cane pole and bobber” sport.

While getting started can seem daunting and appear to be the beginning of an unavoidable mess, being able to effectively push 4 to 10 poles does not take super-human ability or a PhD in quantum physics. It simply involves baits in the water and guiding your vessel in the direction and speed wanted to cover an area.

What some see as foreign or unsporting others have perfected and passed down for generations. Some states strictly prohibit the use of multiple rods so be sure to check your local regulations before starting.

Creel limits apply regardless of how many rods are used, and on the vast, coverless, muddy water reservoirs in the south where nomadic crappie scatter throughout the water column like stars in the sky, catching a mess of fish is nearly impossible during certain times of the year without a spider-rig approach.

What is spider rigging

Spider rigging, slow trolling, pushing, dragging, or whatever you might call it, consists of putting multiple poles, commonly 8, in rod racks and fanning them out 180 degrees on the bow of the boat while pushing baits and keeping the main lines near vertical. A precisely controlled drift, utilizing chains or wind socks drug from the back of the boat, or running an electric trolling motor at extremely low speeds is how anglers maintain the most important element of this tactic, boat control. In most situations, 0.3 mph is the ideal speed, hence the term slow-trolling. The most common terminal tackle is a double-hook minnow rig, with the dominant bait being live minnows.

When crappie are far away from the visible structure and shallow banks they frequent during the spawn, the most effective method to entice these tasty panfish is slowly pushing multiple baits across a wide swath through likely areas. Prespawn crappie stage just out from spawning areas. Post-spawn crappie become nomadic and lethargic and cruise back to deeper waters. Fall and winter crappie school up and stalk baitfish in open water and submerged cover. The most effective way to consistently catch all of these fish is spider rigging.

Precisely controlling your boat is the most important aspect of spider-rigging, and can mean the difference between a successful day on the water and a disaster. Consider the control and precision you use when holding a jig pole or casting rod, now imagine holding that same rod, but frantically swinging it all over the place like you were swatting at a bee. The boat acts as your hands, and maintaining speed, direction, and overall presentation is dictated by the control of the vessel.

By adjusting speed, depth and baits, spider rigging can catch crappie year round.

While live minnows will always dominate bait selection for spider rigging, there is no end to the combinations of baits that will work for crappie. One of the best parts of running multiple poles is being able to try different baits until you figure out what works best that particular day.

Spider-rigging can seem daunting at first, but with a little research and a bit of practice, you can quickly stock the freezer with crappie the whole year.