Soft plastic crappie lures have come a long way in the last few decades, and crappie fishermen have taken advantage of the ever-increasing options to help put more fish in the boat. Deciding exactly which style, size and color of soft plastic to use can seem tough with all the choices available, but knowing a few simple “rules of thumb” and understanding how certain conditions should impact your decision will take a lot of the guess work out of it.

Tubes have been around for decades, and are the staple among soft plastics used to target crappie. Tubes are hollow through the top half, and have frilled “skirts” on the bottom half. While they can be poured in a myriad of color patterns, a half and half split with one color on the body and another color on the skirt area is the standard.

Tubes designed for crappie are available from 1-inch up to 3-inch. The hollow tube allows for a scented attractant to be squirted into the body to increase bites, but the thin soft plastic of the top tube section, where many bites actually happen, is prone to tearing after a few fish. It’s important to note, though, that some tubes are much tougher than others.
The top selling brands of tubes are Southern Pro Lil’ Hustlers and tubes by Midsouth Tackle.

Solid bodies have been around forever, probably resembling a chunky, split-tail grub in inception, much like the classic beetle-spin. Now, every type of soft plastic used for crappie fishing is available with a solid top half, making for a more durable bait than standard tubes.

While toughness is increased with solid bodies, the rigidity of some of the top sections is so much that on a light bite, it may get spit out quicker. This is especially true with larger baits.
The most popular selling solid-body plastics are the Muddy Waters Baits, the Crappie Thunder by Mr. Crappie, and the Slab Slay’r by Bobby Garland.

Stinger shad baits are solid body plastics with a single, pin-tail back half, closely resembling a live minnow. These baits have become increasingly popular over the last 5 years. Stinger baits are designed to be fished with little-to-no movement. These baits are so effective because they most closely resemble a live minnow, and the single pintail is constantly quivering regardless of how still you hold it.

Curly tails are generally solid bodies on the front and thin and curled on the back. This design allows the tail to flutter causing both visual attraction and water disturbance, even at very slow speeds. Curly tails are designed to be in constant movement, and their action is what entices strikes.

Paddle tails â€“ Paddle tails are another solid body bait that is designed to be fished in motion. The bottom half of these baits consists of a thin portion attached to a flat “paddle” that is perpendicular to the rest of the bait. The paddle flutters back and forth and creates more action than most curly tails. Generally, paddle tails have to be retrieved or pulled faster than curly tails to generate their side-to-side motion, but this is really dependent on the thickness of the paddle, as well as the portion connecting the paddle to the solid body top half. The top selling paddle tail baits are the Slider and Bobby Garland Stroll’R.

Split-tail baits are less popular than the other types, but still fill up a few compartments in many crappie fishermen’s tackle box. They most closely resemble the original grub-style soft plastic, the Beetle Spin, except with longer tails. Those tails can be stingers, curled, or have paddles on the ends. The Bobby Garland Split Tail and the Crappie Magnet have been the staples in this category, but the most popular split tail currently is The Joker by Mr. Crappie.

The Joker is split three ways at the tail rather than two, and really stands in a category of its own. Wally Marshall, better known as “Mr. Crappie” designed the bait and released it through Strike King, and its effectiveness immediately made the bait a top-selling plastic.

“The Joker is great for vertical jig fishing or working it slowly under a float, but my favorite way to fish it is to pitch it into heavy cover and kind of drag it back, crappie can’t resist it!”

Every style of soft plastic bait is capable of catching a crappie using each of the following tactics, just like a professional bass fisherman could probably catch a limit of largemouths using a push-button reel and an earthworm, however, utilizing the most effective gear and bait will make the most of time on the water.

If a fast retrieve garners the most bites, then a bait with more action that causes more water displacement will compliment the speed and encourage the reaction strikes. If a slow to moderate retrieve works best, then baits that have subtle, steady movement will facilitate that bite. If the bite is slow and the crappie are lethargic, or if they are “nosed up” to brush or artificial cover and stalking prey, then a bait with a more realistic look designed to trigger strikes while being fished very slow-to-still is best.

Vertical jigging is one of the quintessential tactics employed to catch crappie. It’s a slow fall followed by a motionless presentation in most cases. Tube jigs have been the primary bait used for this tactic for decades, and are still a viable choice. The skirts will “umbrella out” during a slow fall and move with the water when held still. Stinger or shad style baits are the preferred choice by most crappie anglers today, because the single, pin-tail will quiver incessantly even when holding the bait still, tantalizing crappie into striking even when the bite is very slow.

Float fishing to pull a jig along slowly or letting it sit over cover with a bobber is another very popular method for catching crappie. Again the motionless presentation calls for a bait that has movement while at rest or moving and falling incredibly slowly.

Casting and retrieving jigs keeps the bait in near constant motion, and is best served with a curly or paddle tailed bait. Thinner plastics will achieve the desired action with extremely slow retrieves, and it’s best to match the right bait with the speed the crappie wants.

Spider-rigging is most commonly associated with live minnows, but many anglers put plastics on the hook above the minnow to add color. Any of the soft plastics will work for adding color, but a tube jig is most commonly used. When spider-rigging without live bait, it comes back to speed to determine the best plastic to use. Slow trolling at 0.4 mph or less is best served with a stinger, tube jig, or very thin curly tail, and as speed increases curly and paddle tail baits will provide more action and strikes.

Long-lining is a multi-pole method that requires a minimum speed of around 0.8 mph. At this pace, curly and paddle tail baits will provide the action desired to compliment the fast bite.

Bathtubs, swimming pools and clear bowls are excellent places to get to know the action of your plastics.

Bigger baits often do not equate to bigger crappie. A better way to look at it is, bigger baits equate to more aggressive crappie. Bobby Garland Pro Staffer Kevin Rogers has made a living fishing oversized plastics at a fast pace.

“I’m not looking to fish a spot out,” he said. “I want to catch the most aggressive crappie and move on to the next spot as quickly as possible.”

While this tactic has served Kevin well over the years with 30+ tournament wins and more “Top 10’s” than you can shake a stick at, it doesn’t always result in catching the biggest fish.
At this past year’s Crappie Master’s National Championship, 200 of the best teams in the country descended on Southern Mississippi’s Lake Washington and surrounding areas, where the shad are big and abundant, and the crappie grow to gargantuan sizes. The boat pressure on the shallow lake pushed the bigger crappie to the bottom and made them nearly impossible to catch, even with live minnows.

The Crazy Angler Tackle team of Tony Sheppard and Alan Carter figured out the puzzle, and downsized to the very small-profiled Crazy Angler Lil’ Rascal, a 1 ½-inch stinger-style bait, in black and chartreuse tipped with a crappie nibble. Even in the murky water and at 7 feet deep, the team caught the biggest two-day total weight to beat out the rest of the field.

The lesson to take from this is that trying to “match the hatch” or adjust size to water clarity is not always as important as matching size to a crappie’s mood. A school of crappie may be reluctant to bite anything bigger than a 1-inch bait in the morning, and become active in the evening and smash a 3-inch bait. Just as you’d pass (or at least wait a little while!) on a large piece of cake right after a huge holiday meal, but might still take a small, bite-size morsel like a mini-cupcake, crappie are no different. 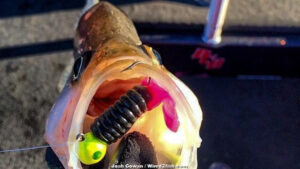 Color selection has baffled anglers for years. If you ask most crappie fishermen what color they’d use if they could only pick one, black and chartreuse would probably win by a healthy margin. The general rule of thumb is to use translucent and natural colors in clearer water, and solid and brighter colors in stained to dirty water. Lighter colors with more sparkle or flash work better during bright sunlight, and darker, solid colors are generally best under thick cloud cover.

It’s again important to remember though, that just like when picking bait size, matching a crappie’s mood can trump every rule in the book. During pre-spawn and spawn when crappie are very aggressive, the best color is often the brightest, loudest plastic in your tackle box.

Glow-in-the-dark baits have become very popular in the last few years, with glow-pink and chartreuse, or “electric chicken” as it’s commonly called, dominating sales during the early spring. Wally Marshall’s version of this color combination, an extremely bright pink and chartreuse split called hotchicken.com is the hottest seller in his Mr. Crappie line.

“I like white and chartreuse and monkeyshine in clear to lightly stained water, but “hotchicken.com” has been my number one bait for the last two years,” Marshall said.

Picking out the perfect style, size, and color plastic for a particular day and body of water can seem overwhelming with all the choices available, but having an understanding of how water clarity, weather conditions, and most importantly a crappie’s mood effects the bite will narrow down your selection and dramatically increase your chances of having success on the water using plastics for crappie.