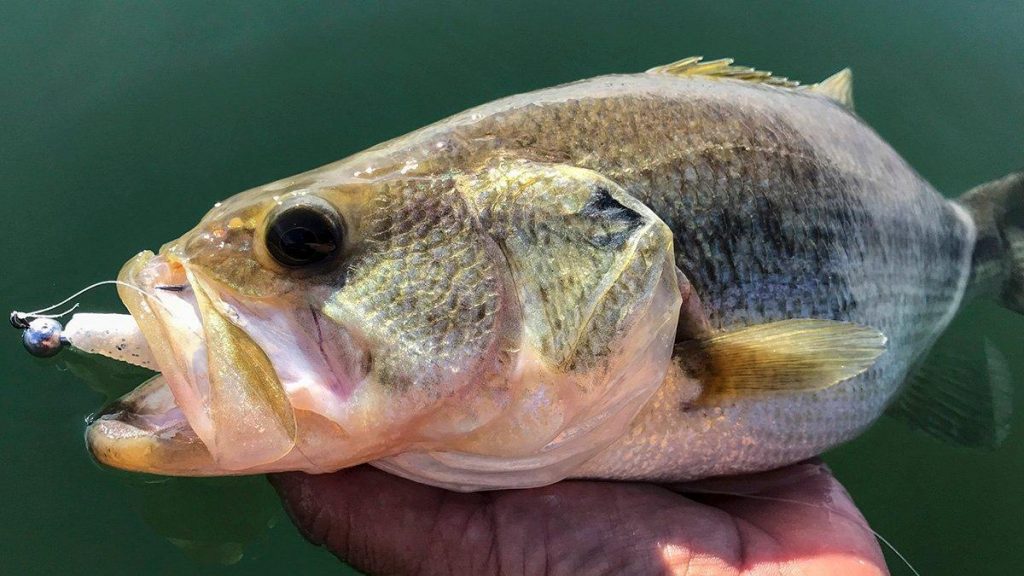 The Damiki Rig has become a staple on a lot of highland impoundments and clear water fisheries for winter bass fishing. The unique deepwater, do-nothing rig was thrust onto the bass fishing scene in prime time in an Elite Series bass fishing tournament on Cherokee Lake in February. Guys have been throwing it for years, and surprisingly it had been kept under wraps for the most part before that event.

Imitate forage — that seems like a pretty straightforward objective for artificial lures; but the job has two parts: look like what bass eat and act like what bass eat. For the Damiki rig, excelling at the latter is easy — just stand still.

In truth, a little step here or there occasionally helps, but for now, consider this analogy from Bassmaster Elite Series pro.

“The Damiki rig is kind of like a float-n-fly, only your boat is the float,” said Tennessee pro Ott Defoe.

That squarely summarizes this rig’s vertical drop, controlled-depth premise; but a few details merit mentioning. First Defoe says Damiki rigging is primarily a winter deal, especially on highland reservoirs with exceptional clarity — call it 5-foot-plus. You might find a few other opportunities, like early prespawn mode or even a little summer offshore stuff; but this simple setup earns its stripes when anglers are layered and fish are shivering. 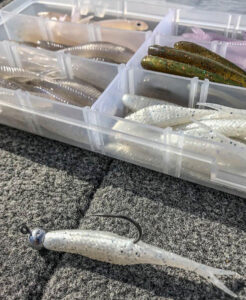 A modest rig pulled from the walleye angler’s playbook (“moping” technique), the Damiki rig features a light jig head like the VMC Moon Eye and a straight baitfish style plastic like the Damiki Armor Shad — a split-tail soft jerkbait for which the rig’s named. Jig styles vary, but you want a 90-degree line tie; the essential element for the requisite horizontal presentation that mimics suspending baitfish.

“It looks just like the shad or alewives the bass are feeding on,” DeFoe said. “It looks like the weakest one in the school; the easiest minnow to eat.”

Favoring the 4-inch Bass Pro Mini Shadee Shad, DeFoe trims the bait to cap the entire profile at 3 inches. He likes a 3/8-ounce Moon Eye, but he’ll drop to a 1/4-ounce if the fish are finicky. DeFoe keeps a 1/8-ounce handy for super-tough bites, but painfully slow falls relegate this to last-resort. 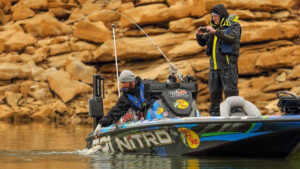 Like a drop shot, the Damiki rig will temp bass pinned to the bottom, but this technique shines when fish suspend around bait schools. DeFoe describes Damiki rigging as a classic “video gaming” technique, where you’re sitting overtop suspended fish, dropping the bait within a few inches of their heads and letting persistence sell the ruse.

“It’s all about getting your bait down there, getting it in front of the fish and keeping it there, because it is a wintertime pattern and the fish don’t want to chase much,” DeFoe said. “I typically just nervous shake it; just quiver the rod tip ever so slightly.

“As I see a fish coming to it on the graph, I may raise the bait a little bit, but I never make any aggressive hops. I’m not even shaking it enough to see a pronounced change in my bait line on my graph, other than the line getting thicker.” 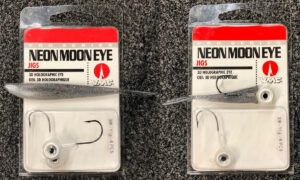 “You’ll see how the fish are reacting to the bait on your graph,” DeFoe said. “Some days, every fish that gets under your bait bites it, but other days, it’s like one out of every 10 bass bites it. So you can adjust bait color and line sizes based on what you’re seeing them do.

“When they’re on, this technique is definitely what you want to be doing. You’re sitting there, holding that bait still and you see the fish coming so you’re prepared for it, but it’s like a jig bite; it feels like they swim from 30 feet away to knock the crap out of it.”

“It’s important to give it half a second,” he said. “Feel the thump, let him come tight and then reel down and jerk. Because they suck it in so hard and clamp down on it so hard in that cold water, that’s where that slightly heavier medium-action rod is important, you have to hit them pretty hard on the hookset. Then you have them from there.” 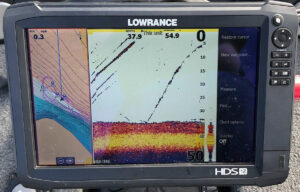 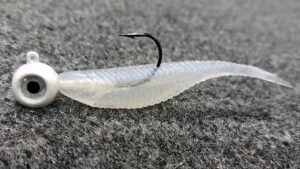 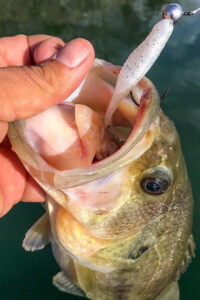