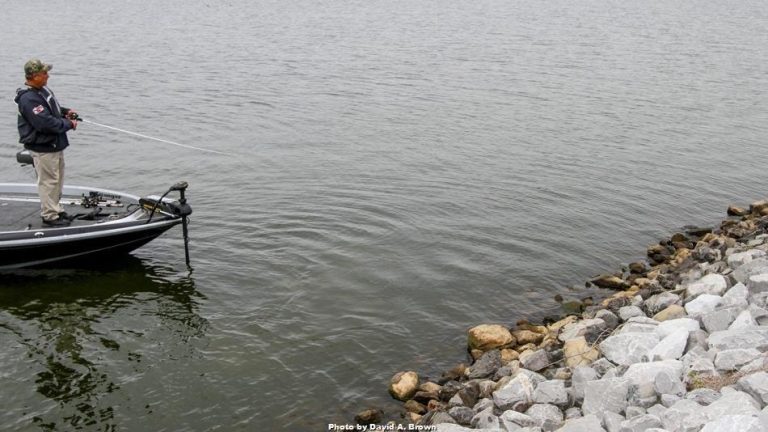 When Mississippi bass make their move toward the areas that will eventually become Magnolia State maternity wards, FLW pro Pete Ponds gets pretty cranky. Not so much over any frustration or vexation; rather, he knows this is the time to put his Bandit crankbaits to work in finding those hungry prespawners.

Mississippi bass pretty much follow the script for prespawn staging, so look for those last hard edges outside the spawning bays, flats and sloughs. Rocks present classic staging structure, and while Ponds won’t bypass the natural stuff, he finds his greatest consistency where man’s need to secure shorelines results in hundreds of yards of stacked cover on structure.

“Riprap is tops,” he said. “It gives you vast stretches of structure that attracts fish because baitfish gather there and because it holds heat.

“I want to choose a bank that has a lot of sun so that will be the north or northeast side. As in all cold water situations, the afternoon is usually better because the rocks have time to absorb heat during the day.”

Ponds stresses one point about rip rap: A long stretch of riprap is rarely a simple homogenous line of rocks. Look beyond the surface-level sameness and learn to pick out the visual clues that reveal the sweet spots.

Ponds will start a morning of prespawn prospecting with a Bandit 200 crankbait. Methodically working down the rocks and making parallel casts to keep his bait in the general strike zone.

“Certain times of the year you don’t want to throw parallel to the rocks, but in the early spring you do, because the fish will be right on the riprap,” Ponds said. “You want to set the boat about 10 feet out and make long casts right along that edge.”

“If you have a partner, you have to stand side-by-side and alternate your casts so you’re not pulling your baits over one another,” Ponds said.

Later in the day, the fish will rise higher in the water column so a shallower presentation usually does the trick. Here, Ponds will switch to a Bandit 100 and move closer to the riprap. Casts are usually shorter here, but the parallel approach remains constant.

Throughout his search, Ponds said he pays close attention to the various details that can point him toward the high-percentage areas. Riprap becomes can be more productive due to the following: 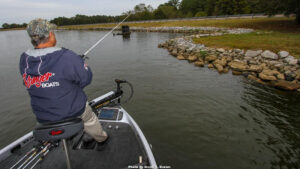 You have the main shoreline, you have the water’s edge and you have the riprap in between. Sounds pretty straightforward, but to parry that pun, the angle at which the rocky mound enters the water says much about what lies beneath the surface.

“I prefer steeper riprap banks because the rocks extend under the water at the same angle and that indicates deeper water close to the rocks,” Ponds said. “A lower sloping bank means the deep water is farther off the riprap.”

Depending on time of day and prevailing weather, the fish might feel more comfortable on spots with various riprap angles, and whichever type the bass prefer on a given day, it will likely hold consistent from bank to bank.

“Pay attention to where you’re getting bit,” Ponds said. “If you’re catching them all on 45-degree slopes or a lower angle, you should focus on those types of spots.”

Just like offshore ledge fishing, riprap banks have their occasional points, breaks and jut-outs. Ponds said that any of these offer fish that “something different” appeal and in many cases, solid ambush points and travel routes from deep water.

A particularly sweet scenario finds a riprap wall making a sharp 90-degree turn and forming a shallow pocket as it straightens back out. Such little dips on walls heading back into a shallow bay offer one of the first bedding areas bass my utilize, so expect prespawners to stage on those corners.

From municipal parks to waterfront communities, single lanes to multi-boat facilities, launch ramps flanked by riprap are well worth a little extra attention. These spots offer multiple points of appeal.

“Concrete is just like riprap, in that it holds heat,” Ponds said. “The fish have hard bottom and there’s probably some type of gravel next to the ramp, and we know that’s where the fish like to spawn.

“Also, in the south, power loading is pretty common and that blows out a ledge right off the drop. That creates a ledge or drop-off that the fish will stage on.”

You obviously want to avoid impeding anyone’s launch and the quieter periods are going to be more productive. But don’t overlook these potential congregating areas.

To the maintenance crew, they’re simply an annoyance; to the trained eye of a seasoned angler, weeds in riprap paint a big bullseye on the spot.

“That tells me that there’s something more going on under the water,” Ponds explains. “More often than not, if there’s a clump of grass, it means there’s an old road bed there and that gets into the routes that they’ll use when they come up.”

After his riprap scouring, Ponds will look for more natural prespawn areas. Those include the following: 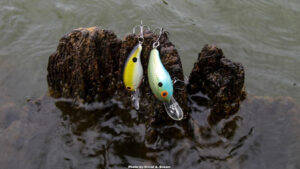 “Stumps have massive root systems that provide the hard bottom that bass like for spawning,” Ponds said. “Also, as the fish are coming in to spawn, the stumps are natural staging areas for fish that are moving into shallow areas.
“It all has to do with water depth and clarity. So where the stumps are located will tell you if they’re likely to be prespawn or spawning locations.”

For stump duty, Ponds goes with a one-two punch of a Bandit 200 and a Bandit square bill.

Hard substrate bottoms make fine nesting sites, so Ponds keeps watch for the signs of such habitat. A sandy beach is a no brainer, but shoreline vegetation also offers hints. Lily pads and elephant ears grow in sandy bottom, so their presence is a good indication.

Pine trees on the bank also point to a sandy bottom close by. In either case, Ponds looks for prespawners to stage on docks, seawalls and natural points adjacent to the sandy areas. His bait choice: Bandit Footloose, 100 and 200.

Chunk rock to smaller rocks, small rocks to gravel — those are all likely areas, but Ponds adds to the list a junction of sand or gravel with clay. Bass like their edges, so find one of these natural blending areas, and you’ll likely find prespawners on the first drop-off or approaching point. Drains and cuts in a clay bank indicate subsurface variances that will often concentrate prespawners. 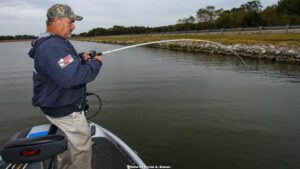 In most areas, Ponds retrieves depend on the stage of prespawn. Early in the season, a start-and-stop cadence typically works best.

“You don’t want a really fast retrieve,” Ponds said. “What I want to do is crank it 8-10 times, stop it and let it float up. I don’t make long pauses — I just give it a few seconds, and then continue the retrieve.

“A lot of times they’ll follow it, and that will tell you if you’re using the right color. Give them these short pauses, and it will often entice them into biting.”

During the end of the prespawn, Ponds shifts into high gear to match the fish’s disposition.

“You want to keep it moving because those males are aggressive. They’re up there guarding their stuff, and they’ll chase down a bait,” he said. “Don’t let those males have time to look at your bait, and you’ll catch more.”

Riprap is a great place to start your crankbait search for prespawn bass as the water warms. From there seek out those areas leading to the spawning grounds. Flats in the mouths of bays with cover, transition rock on lead-in banks and sandy spawning areas are all great places to find willing prespawn bass. Match your retrieve to the activity level of the bass and you’ll find success.