Winter bass fishing can become increasingly difficult when the water temperatures reach the 40-degree range. When you combine lethargic bass behavior and slow metabolic rates, even the most diehard anglers opt to stay home and wait for more favorable conditions.

According to professional angler Patrick Bone, however, this is one of the best times to catch your biggest bass of the entire year.

“Contrary to popular belief, female bass already have eggs in them in preparation for the spawn,” Bone said. “They’ve also been feeding heavily on shad throughout the fall, so this is when they’re going to be at their absolute heaviest weight. Now that the cold water temperatures have made them less apt to actively chase prey, they’re not burning off that extra weight. This results in loads of fat, lazy females that can easily be the fish of a lifetime.”

In order to fool these giant bass, Bone relies on a simple 4-lure system that works wonders in cold, wintertime conditions.

Efficiency is a major factor when locating concentrations of winter bass. It’s not uncommon to find them in depths ranging from 6 feet to 50 deet, so it’s important to choose a lure that gives you the ability to cover water quickly.

“I’m going to start my dissection with a crankbait such as a Bomber Fat Free Shad Deep Diving Square Bill in larger creeks and focus primarily on channel bends and transition banks,” Bone said. “This lure also allows me to locate the most active bass in a given area. Crankbaits are erratic enough to elicit reaction strikes from coldwater fish, but I’m also able to slow them down to match the relatively sluggish mood of the bass.” 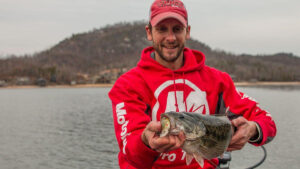 In order to accomplish this, Bone actually fishes his crankbaits much like a Carolina rig. He’ll make a long cast and begin with a moderate retrieve. Once the lure makes contact with the bottom, he’ll slowly sweep his rod to the side to move the crankbait—his reel is only used for retrieving slack.

“Bottom contact is absolutely essential,” Bone said. “They’re probably not going to aggressively chase the lure, so you have to make them bite. When you’re dragging that crankbait along the bottom, it’s constantly darting in different directions as it collides with cover; it’s not going in a straight line. Coldwater bass can watch a crankbait swim right by their nose without reacting, but as soon as it kicks off a rock or a log, they’ll smash it. It’s a biological instinct for them.”

Fish above ‘em when they’re suspended

Winter bass are notorious for positioning themselves in the middle of the water column—commonly referred to as suspending—especially in post-frontal conditions. Although suspended bass are often avoided by anglers due to their inactive nature, Bone has found jerkbaits to be a big-time equalizer.

“When the weather is sunny and breezy, suspending jerkbaits such as the Smithwick Perfect 10 Rogue and Elite 8 Rogue are tough to beat in the same areas as I’d fish a crankbait,” Bone said. “Crankbaits often dive below suspended bass, but these jerkbaits stay above the bass and in their line of sight. Even if they’re suspended in 15 feet of water, they’ll still come up to eat a jerkbait.”

While many anglers will pause their jerkbaits for 30 seconds or more in cold water, speed is the name of the game for Bone. He’s using his jerkbait purely as a search bait, so again, efficiency is paramount.

“To be honest, I don’t really care about cadence,” Bone said. “I’m trying to find fish and I don’t have the patience to fish a jerkbait that slow. If they’re going to bite it, they better come and get it—even if the water is 40 degrees. I’ll do the whole ‘jerk, jerk, pause’ thing you always read about, but the longest I’ll let it sit is about 4 seconds; and that’s pushing it.”

Once he’s found a concentration of fish with crankbaits and jerkbaits, Bone will go back through the area with slow-moving lures in order to “clean up” what he missed on the first pass. Remember, not all winter bass are going to be willing to attack reaction lures, so it’s always worth your time to thoroughly saturate an area with bottom-contact presentations before leaving.

“When I fly through an area and get a few bites, I’ll pick up a 1/2-ounce Booyah Boo Jig or Pigskin Jig and fish it all over again,” Bone said. “I’m targeting totally different fish than I would be with a reaction lure. I’ll drag that jig at a fairly slow pace, but when I feel it snug up against a piece of cover such as a rock or log, I’ll aggressively pop it free and force the fish to react.”

While trailer selection should never be overlooked in this situation, it doesn’t have to be terribly complicated. Bone has a simple way of thinking when it comes to making his selection.

“When the water is in the 40-degree range, a crawfish isn’t going to be down there waving his arms around and saluting everyone,” Bone said. “You want your trailer to look natural in cold water without a bunch of flapping around because a bass is going to carefully inspect your jig before it decides to eat. If it has too much action, you won’t get a bite because the bass know better. So I tend to use a 3 1/4-inch Yum Chunk or a 3 1/4-inch Yum Bad Jamma. These trailers look natural and avoid overpowering the fish.”

There’s a major misconception in the bass fishing world that shaky heads catch nothing but small fish. In the winter months, however, this popular finesse presentation can be your saving grace in tough fishing conditions.

“Before I leave an area in which I’ve caught fish, I’m always going to make a few extra casts with a 1/8 or 1/4-ounce shaky head with a 5-inch Yum Dinger,” Bone said. “This is an awesome way to catch some bonus fish throughout the day; I’ve done it countless times. Oddly enough, this little rig will often catch some of your biggest fish.”

When fishing a shaky head in cold water, the goal is to impart action into your bait without moving it laterally. When it hits a piece of cover, Bone makes sure to give the shaky head a little extra “soaking time” in that area. He’ll just barely move his rod tip and shake it in-place for several seconds at a time.

“I have to remind myself to slow down because it can really get tedious at times,” Bone said. “I’ve started using 20-pound Seaguar Smackdown Braided Line with an 8-pound InvizX leader because it helps me feel how and when my rod movements are affecting the bait.”

The next time you’re looking for winter bass, make a concerted effort to try this 4-lure system. If you can find ‘em with reaction lures and have the will power to thoroughly fish the same areas with slow-moving baits, you’re likely to catch a lot of bass—even in inhospitable conditions.