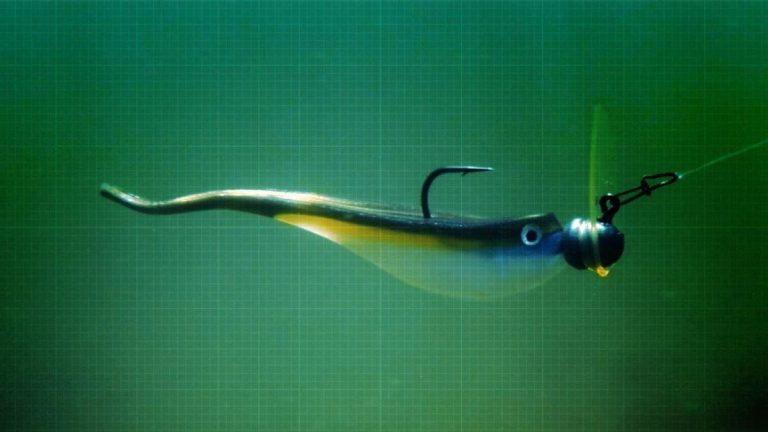 The oversized Scrounger type swim head and big jerkbait style bass fishing soft plastics have made a big splash in ledge fishing in the last several years, especially on the TVA chain of lakes and down in Texas. There are several options on the market for heads and for plastics but we thought it would be interesting to take a look at one version to see what the bait looks like to the fish.

The Jenko Tennessee River Tremor Head and Tremor Shad were specifically designed to be fished together to mimic a large forage like gizzard shad that are popular for big bass on the Tennessee River. The head features a rounded head with a soft plastic bill and a snap clip to allow the head to pivot freely as water is forced around the cupped lip of the Tremor Head.

The combination Tremor Shad and Tremor Head rolls and shimmies along giving it a nice vibrating swimming action. But we realized quickly that the appeal from this combination is the flash of the body sides. It’s almost part crankbait and part spinnerbait but in an oversized soft plastic profile.

The bait has to hit a sweet spot on speed to get the full effect. Too slow and the action is subtle and not much to it. Too fast and it will start to ride up and out of the target area. You can play with line size to keep it running deeper by using a smaller diameter line.

You can pull it and drop it and stutter it but its best flash and appearance seems to be on steady medium to medium-fast retrieve. If you want to fish it faster in deep water, go up to 1 1/4 ounce size head and drop down to 12 or 14-pound fluorocarbon line.

We usually like to fish it on a 7-foot to 7-foot, 6-inch medium-heavy rod with a 6.3:1 reel to give it a nice steady speed on the retrieve.