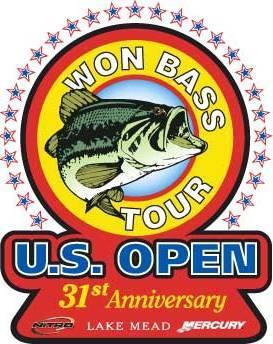 Noted as one of the toughest, yet most “just” fishing tournaments in the world, the WON Bass Nitro Boats / Mercury U.S. Open bass fishing tournament will kick off  Monday September 9  on Lake Mead, in the desert outside Las Vegas. Once again, the Costa See What’s Out There Live show will be presented by Costa Sunglasses throughout the entirety of the three day event.

In its 31st year, the U.S. Open has proven to be an event that anyone has the potential to win because of the fact that Lake Mead presents anglers with the opportunity to catch fish in a variety of ways. Lake Mead also is the kind of fishery that gives few anglers a true home field advantage.

The desert conditions also present challenges to the anglers and their equipment. Past events have featured days eclipsing 100 degrees and afternoon monsoons that drop temperatures dramatically, bring high winds and torrential downpours to the event.

Winning the event is no easy task, and being the last angler perched atop the Costa See What’s Out There Hot Seat  on Wednesday  will be an angler who has earned his trophy and one year reign as the U.S. Open Champion.

Included in the field this year are past U.S. Open champions; FLW Tour and Bassmaster Elite Series winners, Bassmaster Anglers of the Year and Bassmaster Classic Champions. The 31st WON Bass Nitro Boats / Mercury U.S. Open and the Costa See What’s Out There Live Coverage is sure to provide competitors and viewers plenty of fireworks throughout the three day event.

The WON Bass Nitro Boats / Mercury U.S. Open takeoff will occur at Callville Bay Marina  on Monday,  Tuesday  and  Wednesday  beginning at  5:45AM, with daily weigh-ins starting at  2:00PM. Following the event’s conclusion  on Wednesday, a champion will be crowned at Boulder Station Casino the final evening of the event.

The WON Bass Nitro Boats / Mercury Marine U.S. Open See What’s Out There Live Webcasts presented by Costa Sunglasses will begin with a pregame show from the Boulder Station Casino after the Sponsor Showcase and mandatory partner pairing meeting; the live pregame show will beginSunday  Night at  5:30PM.

Daily event coverage will begin following tournament take off with hourly updates at  8:00AM,  9:00AM,10:00AM and 11:00AM  each day, followed by weigh-in coverage beginning at  2:00PM  and finally a6:00PM  post game show; all show times are Pacific Standard Time. .