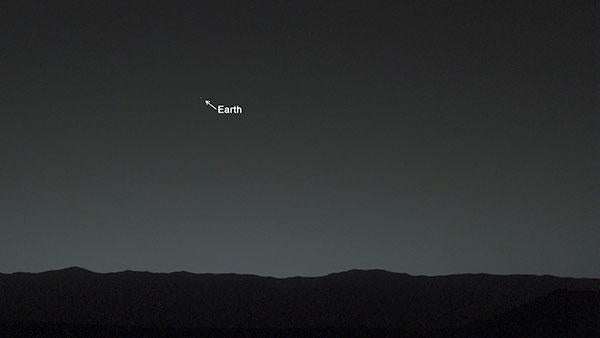 For all of us there is a great mystery,

the life that awaits us.

Who will we be, between birth and death.

At birth, we are all, WE, it is the, WHO, that we will become, that awaits us.

The mystery of the WHO, I believe is answered throughout life in tiny, tiny, moments.

Moments not known when they happen, only realized when we look back, moments so fragile, so special, that had you turned right, instead of left, had you slept late instead of getting up early, had you not gone but stayed home,

I don’t for a moment believe these moments, are random.

And once I came to that understanding, there came peace to my life.   There came a tranquility, there came, thankful.

And my hope for all of you is that your right here, right now, is where you want to be.

the stories are about,

If we are the only WHO in our Solar System, it cannot be that we are here to fail.

You are here. This image of the earth was taken by NASA’s Curiosity Mars rover.

In the billions and billions of years of our Solar System, our tiny moments in time, may be the moments that count the most.   In the life of our planet our time on it is less than a blink of an eye,

but it is the most important blink.

The other day I sat on a porch looking out on the Red River with Bassmaster Classic winner and one of the top five all-time greats in the sport, Denny Brauer, and I talked about how I believe that in our lives come moments that make us the WHO of we, and Denny nodded his head, saying he believed that too, but then added,

â€œI owe my whole professional career to five minutes in my first tournament.â€

And so, comes, Denny Brauer’s, moment.

It was April of 1980, Denny had spent the last few years laying the bricks of many of the University of Nebraska buildings, â€œLife of a union bricklayer is good at times, bad at times, in the winter if you don’t have inside work, it can be very bad.â€

Off the job, â€œI fished, I won a couple of Nebraska State fishing derby’s, built me up some confidence, and after 13 years of being a union bricklayer me and another guy started our own company so I had some flexibility in my time, thought I would give a run at the big boys to see what I got.â€

What he got was, um, hm, let him explain, â€œI nearly peed my pants, I walk into the lobby of the hotel where I was staying for my first tournament and standing at the counter is Bill Dance, he was real friendly, welcomed me, made me feel at homeâ€¦but dbâ€¦it was BILL DANCE.â€

Then my good friend Denny becomesâ€¦Denny Brauer:   â€œYou know looking back that was Bill’s last tournament on that tour, I must have scared him to death.â€

I give Denny my, Yeah Right look, and he just breaks up laughing.   Denny was, is, one of my closest friends out here, I knew him as just a dude of the same age, knew nothing of his background, nothing of his on water persona as some sort of intimidator when we first met in fact I asked him about that after the Bill Dance remark:

â€œdb, don’t tell anyone but I made a lot of money with that intimidator thing.â€

I had obviously not been intimidated much, between us there was always more fun, more laughter, more appreciation than intimidation.

Although, I do think I made him pee his pants once.

So in April of 1980 Denny Brauer took to the waters of Lake of the Ozarks, â€œThe first day of practice I pull up on to a rolling bank and I pull in two 6-pounders,â€ on the porch as Denny tells me that he starts smiling and I know that in my friend’s mind, he has once again hooked those two fish.

It was the moment that changed a bricklayer, forever.

â€œDuring my last five minutes on the water I caught two 5-pounders and that got me the check and to tell you the truth, db, without that check, that first check, I would have gone back to being a bricklayer and never would have had this wonderful career I’ve had, would never be sitting here talking to you.â€

Moments in time, in Denny’s case he can pinpoint it to five minutes one day on Lake of the Ozarks, and for all you anglers out there he says this, â€œit taught me a lesson out there that I have used in every tournament since, and the lesson is simply, and importantly, this, the last 5 minutes of any tournament are as important as the first 5 minutes of the tournament, never stop fishing until the last possible second.â€

After that first tournament, Forrest & Nina Wood came up to Denny, â€œand told me they would like it if I kept fishing and that they would pay for my entries if I wanted to do that.â€

Denny, did do that, and in fact legend has it that after he paid for his very first tournament entry, all the other tournaments he entered, the fees were paid by someone else.

Got me a shot of the intimidator out there on the porch when I asked this next question, â€œSo Denny tell me about your last tournament.â€

A pause, a look down at his feet, a clasp of his hands, â€œDude, I’m not dead yet, haven’t had my last tournament yet.â€

And I laughed, sort of always knew that when Denny fished his last Elite tourney, that it wouldn’t be his last, knew it because we were talking just a few minutes after he came in from practicing for the B.A.S.S. Central Open in Shreveport, Louisiana.

â€œdb I love to fish, I fished for a living but now I fish more than anytime in my life and I know I’m doing it for the love, for the fun, it’s just wonderful.â€

For all of us there is a great mystery,

the life that awaits us.

A mystery, not to the speck in space that we live on,

the speck that gave usâ€¦us,

the speck that knows who we are before we do,

and who guides us in that direction,

and it is that guidance,

that is the greatest miracle,