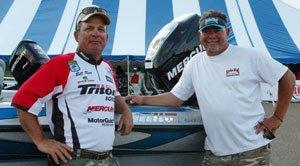 In an event where two 10-pounders and numerous bass in the 6- to 9-pound range hit the scales, Pat Anderson (Former ABA AOY and National Champion) and Rusty Rust jumped to an early start to win the 13th annual Triton Owners Tournament.

Held June 1-2, 2012, out of Paris Landing State Park on Kentucky Lake, the event featured 323 teams, all running Triton boats. The anglers could fish the 160,300-acre Kentucky Lake on the Tennessee River and the 57,900-acre Lake Barkley on the Cumberland River.

Anderson of Ardmore, Ala., and Rust of Hermitage, Tenn., vaulted into the lead on Day 1 with a five-bass daily limit weighing an impressive 27.09 pounds for a 5.42-pound average. Only one other bag weighed more in two days. They sealed their victory by adding another five-bass limit weighing 21.48 pounds to win with 48.57 pounds. For the victory, Anderson and Rusty took home a check for $7,500.

â€œWe started deep on Day 1,â€ Anderson explained. â€œWe found some fish on the graph in about 26 feet of water and threw a 1-ounce Strike King jig and 5.5-inch Strike King spoons. Rusty hooked up with a 4-pound fish to start. We figured weâ€™d be on a deep bite, but then nothing for 30 minutes. Then, we moved to the south end of the lake to fish some shallow grass.â€

Hitting the grass at the southern end of Kentucky Lake, the winning team put a total of 35 keepers into the boat on Day 1. They caught most of their fish on 1/2- and 3/4-ounce Strike King Quad Shad spinnerbaits, but also caught some fish on buzzbaits and worms.

â€œSome of the mats were on the main lake right off the drops,â€ Rust explained. â€œSome were set off on a channel or cut that feeds the fish to them.â€

â€œOn Day 1, we only saw six to eight boats in our area,â€ Anderson added. â€œOn Day 2, it was more like 50 boats. We had local anglers coming to within 50 feet of our boat.â€

Taking second place, Bill Rea of Greenfield, Ohio, and Sam Lashlee of Dixon, Tenn., fished the same grassy area at the southern end of the lake. In two days, they landed 10 bass weighing 42.71 pounds to collect $3,300.

On Day 1, Rea and Lashlee brought in a five-bass daily limit weighing 23.02 pounds to hold second place. They added another 19.69 pounds on the final day. On Day 1, they caught most of their fish on topwater baits or 1/2- and 3/4-ounce chartreuse and white Strike King spinnerbaits.

â€œOn the first day, we headed down the lake and saw a boat on every spot where we practiced,â€ Rea lamented. â€œWe finally ended up fishing almost side-by-side with the winning team. Our bite quit at about noon when the wind blew mud in on us. I was using a couple topwater baits and that mud messed up the bite.â€

One of the last boats out on Day 2, they returned to the southern grass flats, along with many others. With so many other boats in the area, they reverted to flipping plastics into the grass.

â€œOn Day 2, it looked like the Spanish Armada down there,â€ Lashlee said. â€œOn Day 2, we did more flipping. The number of boats pushed the fish down and we caught our biggest fish flipping.â€

On the second day, Rea and Lashlee caught their fish by flipping a Strike King Hawg Caller with a tungsten sinker and 5/0 hook or on a plum Strike King Rage Tail Thumper worm. They also caught some fish on a Strike King Sexy Dog walking bait, but missed a great opportunity to move into first place.

â€œOn Day 2, I lost a really good fish on a topwater bait,â€ Rea said. â€œThe fish split the bait down the middle. I guarantee this fish was over 10 pounds. I lost another good one as well.â€

Less than a quarter of a pound out of second place, Carlisle Tires pro Scott Dean of Terrell, Texas, and his partner, Mike Kernan of Wiley, Texas, finished third with a two-day total of 10 bass weighing 42.49 pounds. They landed 17.36 pounds on Day 1 and followed that with another five-bass daily limit weighing 25.13 pounds to earn $2,750.

â€œOn Day 1, we also fished the New Johnsonville area,â€ Dean revealed. â€œWe had a limit by 8:30 a.m. Weâ€™d catch some in the grass and then go to the ledges and catch some more. We finally committed to the grass. We lost one good one that might have given us two more pounds.â€

Finding one spot whipped by the wind, the pair moved upriver around a bend that protected them from the breeze a bit more. On the first six casts at the new spot, they had a limit of fish in the boat.

â€œI mainly threw a Strike King King Shad both days,â€ Dean revealed. â€œWe had a flurry that got us about 13 pounds pretty quickly. When we pulled up on Day 2, Mike caught a 5-pounder on the first cast. I caught a 9-pounder on my first cast. We lost two fish in the 5- to 6-pound range. Iâ€™d just like to thank Triton for putting on this tournament and all they do and Carlisle Tires for keeping us rolling.â€ 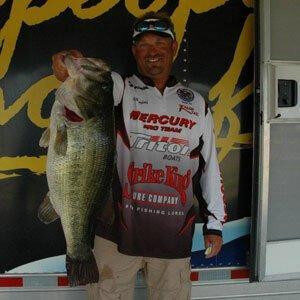 Barry Burton and Kimmy Perryman finished fourth with a two-day total of 10 bass weighing 41.89 pounds. They brought in 21.19 pounds on the first day and added 20.70 pounds the second day.

Finishing in eighth place with 10 bass weighing 38.60 pounds, Scott Mansfield and Jay Corbitt landed the tournament lunker, a 10.38-pounder. Brent Butler and Tyler McFall also caught a double-digit bucketmouth, brining in a 10.20-pounder. On Day 2, they finished seventh with 10 bass and 38.70 pounds, but landed the largest single-day bag at 28.84 pounds for a 5.77-pound average.