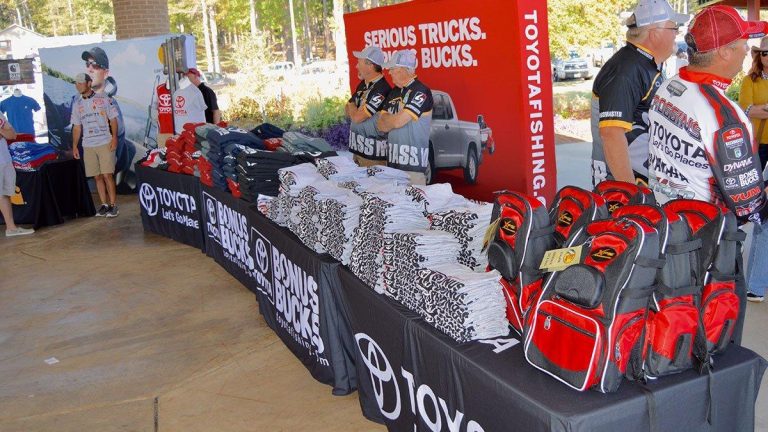 This yearâ€™s 4th annual Toyota Bonus Bucks Owners event took place on beautiful Toledo Bend Reservoir on the border of Texas and Louisiana out of Cypress Bend State Park.  For the fourth year in a row, Toyota rolled out the red carpet to their Bonus Buck participants and put on a no-entry fee tournament unlike any other.

The top 31 placing teams were guaranteed prize money, with 1st place getting a handsome $5,000 check. Anglers who are signed up for the Toyota Bonus Buck contingency program are invited to this one of a kind tournament for fun, food, prizes and to celebrate being part of the Toyota family.  Here are a few highlights from this weekend.

The long lines of anglers at Saturdayâ€™s registration were met with â€œGame Wardensâ€ Gerald Swindle and Terry Scroggins to check fishing licenses. Their wide eyes were soon replaced with smiles and laughter as these two Bassmaster Elite Series legends kept it comical. Not exactly the reception most anglers expect at a tournament!

Soon after being checked in by the honorary game wardens, registrants were then loaded down with practically more swag than they could carry. Bass Pro Shops backpacks were loaded up with Toyota-branded Carhartt commemorative event shirts, hoodies, face buffs, hats, rod sleeves, Carhartt fishing tees, ball caps and even more. Anglers could only grin as they tried to figure out a way to carry all their free gear they received at this event back to their Toyota trucks.

Fill your belly and your livewell 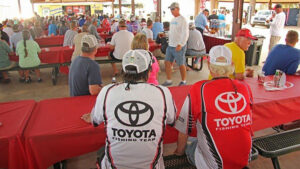 Expectations were again topped when participants were treated to a few meals on behalf of Toyota, provided by Cypress Bend Resort. During the rules meeting after registration anglers were served roast beef and grilled chicken with all the sides one would expect at a five-star restaurant. Additionally, after a long, hot day of chasing bass, fishermen and women alike were also treated to BBQ, burgers, chicken sandwiches, and ice-cold beverages to refuel their energy.

They came from near and far 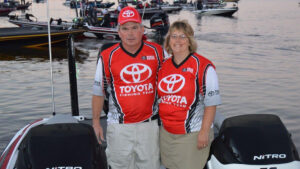 Each and every year it is always astounding to hear the myriad of places people travel from to fish the Owners Event. While there were several local Toyota Bonus Buck anglers competing, there were teams who drove their rigs from all over the country to be a part of the festivities, including this husband-and-wife team of Wayne and Lyn England who drove an incredible 36 hours from New Hampshire to celebrate owning a Toyota and to fish on Toledo Bend.

Toledo Bend is famous for humongous bass, which is a big part of why it was named the No.1 bass fishing destination for 2015. Even with the bluebird conditions and finicky bite, Toledo Bend didnâ€™t disappoint. National Guard soldier Shannon Ordner brought a 9-pound, 6-ounce Toledo Bend bass across the stage to win the Carhartt Big Bass of the event and a $1,000 clothing package. 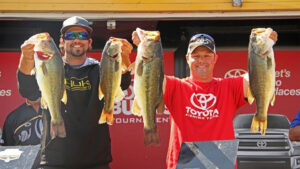 The team that ultimately would end up winning the event, Lenny Francoeur and Taylor Gleghorn, weighed in an impressive 23-pound, 5-ounce limit on a fickle October day. Their big weight makes it seem as though they had a dream day of fishing, but in reality they had to battle through trolling motor mechanical difficulties in the morning. After receiving a spare trolling motor prop from local guide Darold Gleason, the pair went on to dredge up a big stringer of fish with Strike King 6XD crankbaits and take home the $5,000 1st place.

Everyone is a winner 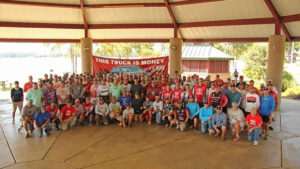 Not only were anglers given free meals, apparel, gear and payouts made to the top 31 teams; other payout opportunities were also afforded to anglers to win at the tournament. There were three random drawings for $500 for teams that finished out of the money. Additionally, a generous $1,000 Bass Pro Shops gift card was given to the 15th place team. Last but not least, a LEER â€œLucky Dogâ€ Prize was handed out to the team who finished in the last money spot of 31st place.

This weekend was a small example full of big reminders of why it pays to drive a Toyota. If you have any questions on how to sign up for the Bonus Buck Program so youâ€™ll be eligible to fish this event in the future, click here for more information.