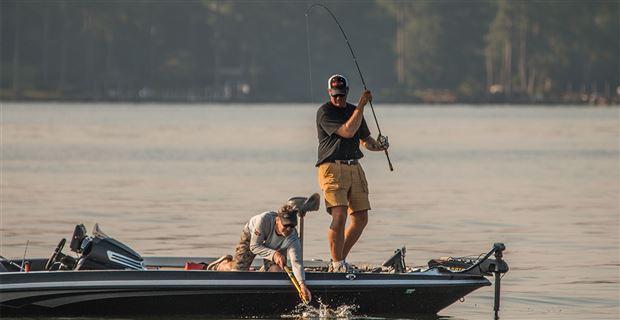 We’ve all done it.

After a solid practice, we have high hopes going into tournament day. We’re at the ramp extra early so we can get our boats away from the crowd to avoid the dock talk. It’s game time at the weekly fruit jar derby and we’re on a sack full of meat.

Watch out KVD and Rick Clunn, we’re fast on our way to a hefty $500 payday.

What’s our social media post going to look like when we announce to the masses that we beat 25 other local sticks? Do we brag a little bit? Do we pose for the mandatory “double fist” photo with our twin 5-pounders? Or do we go about it all nonchalant-like? Heck, we might even try to fit all five of those jokers in both hands just to prove we had a limit. The possibilities are endless.

Eight hours later, however, we’re as mad as a hornet; we could spit nails. Nothing went right and life, as we know it, is over. We got our teeth kicked in and didn’t get a bite. Let the excuses flow like the very tears from our eyes.

“I swung for the fences.”

This is quite possibly the most common phrase heard at a fishing tournament weigh-in. It gives our competitors the illusion that, had things gone right, they’d be in a world of hurt. We knew, beyond a shadow of a doubt, that we were around a bunch of bigguns.

If we wanted to, we could have easily caught that measly 14-pound limit and cashed a check, but that’s not our game. No sir; we went straight for the jugular and tried the blow the doors off. Even though we got beat, at least it sounds like we had a chance to do something really special.

What it really means for most of us: We panicked and didn’t have anything going. The fish weren’t cooperating like we thought they would, so we had a complete mental breakdown and reached the “screw it” stage. With our gameplan quickly unraveling, we picked up a known big fish bait—a jig, frog or big swimbait—and prayed for a miracle.

“Someone was sitting on my spot.”

Especially popular on the popular TVA lakes, this excuse is a solid standby when we’re not quite sure what happened. Unfortunately, in the days of bent rod patterns and unprecedented bird-dogging, this can be a valid excuse in some situations. But let’s forget the negativity for a second; we’ll have some fun with it.

We had ‘em cornered on a main river ledge and they were fresh off the spawn; the fish were coming to us and we had it all to ourselves. We caught an easy 25-pound limit off of it during the week and we could barely sleep the night before the tournament. We were on our way to local stardom.

But dangit, that one joker in the (insert color and brand of boat) was sitting right on it when we pulled up to it in the morning because we got a bad boat number. We could have sworn we saw ‘em bird-dogging us from 3 miles down the river channel when we were whacking them in practice. Yea, actually—we’re sure it was them.

What it really means for most of us: The fish we previously found were in an insanely obvious spot. On any map chip—heck, even a paper map—the area stuck out like a sore thumb. We idled for hours and couldn’t find another school, so all of our hopes and dreams depended on this single, solitary spot. We couldn’t quite recover from the disappointment, so we got nervous and beat the bank with a shaky head all day to salvage some respect.

You’re sure to overhear some tall tales at a fishing tournament weigh-in. Not all of them are meant to be deceiving or misleading, but as the day goes on, those missed fish get bigger and bigger in our minds. 2-pounders turn into 6 and 7-pounders by the end of the day.

While we were flipping that boat dock, though—now that was a biggun. Right when she did the ol’ “tick, tick” on that banana-flavored Bob’s Juicy Fruit Worm, we knew she was the one. We got in position, lowered that 6-foot, medium-action rod with 4-pound test and just absolutely let her have it. We gave her the business.

But right when our rod started to bend, our line broke and we never saw the fish. It had to be a big one; ask our co-angler.

What it really means for most of us: We have no earthly idea how big that fish was, but we know it’s better than what we had because we didn’t even weigh a limit. We never saw her and honestly, never even felt her. For all we know, it could have been a 12-incher and we had a bad spot in our line. But the story sounds good, right?

Similar to “swinging for the fences”, this excuse is meant to let our peers know that we did, in fact, have a game plan. And it was a darn good game plan. If we would have pulled it off, we’d have our name in the paper on Monday morning.

We ran way up the ol’ Hoochiedaddy river, hydroplaned across four sand bars and dodged six three-legged alligators to get to our treasured honey hole up there by Old Man Jemison’s place. They’re resident fish and nobody else knows how to run that section of river but by gosh, they get to biting up there every (insert month) when the water hits (insert water temperature).

What it really means for most of us: Either we had a terrible practice or weren’t able to practice at all, so we got caught up in history. We remember back in the summer of ’86 when Granddaddy Gene took us up the river in his rusted-out canoe and we caught a solid limit of bass on a pre-rigged worm. We paid our entry fee a few weeks in advance, so we didn’t really have a choice whether or not to fish the tournament, so up the river we went.

“My partner was messing me up all day.”

This particular excuse is almost too easy. We don’t have to make up any stories about missed fish, bird-doggers or boat troubles. Just wait until your partner—either the boater or co-angler—walks away and blame them.

“Man, if (insert name) would have just let me fish my pattern today, we would have caught their butts.”

Did they really do anything wrong? It doesn’t matter, apparently. Maybe they didn’t get in their seat quickly enough when you were ready to move spots. Maybe your boater was front-ending you all day. Maybe they were a little slow with the net when you had that 13-inch spotted bass skin-hooked at the side of the boat. Maybe they ate your delicious sub sandwich while you weren’t looking. But man, if it weren’t for them, we would have had a day for the history books.

What it really means for most of us: We’re really reaching at this point. We stunk it up and we’re in a foul mood. Facts don’t matter at this point but rest assured: We’re not leaving the boat ramp until everyone else knows we’re a good fisherman who was merely a victim of circumstance.

EDITORS NOTE: I feel like I shouldn’t have to say this, but I will anyway: This article was solely meant for entertainment. We’re all friends, and it’s important to keep the fun in fishing! Good luck out there and remember to smile. It’s just fishing.