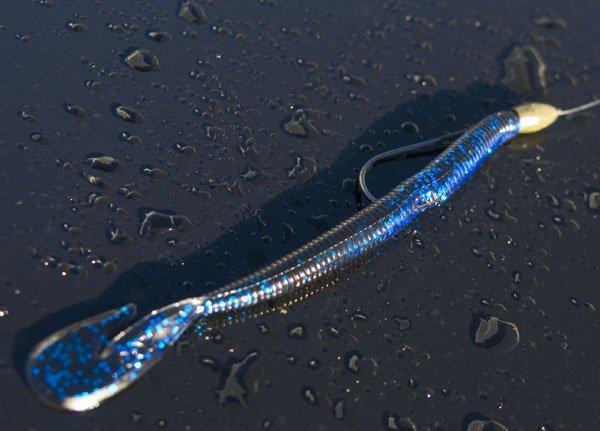 You’ve been on a dynamite soft plastic bite on your local fishery for the past few weeks. You have it dialed in and you know exactly what the fish want and how they want it presented. You’ve been thinking about Saturday all week, because the recent stable weather is indicative of another productive weekend of fishing. As you set your boat down in your first honey hole and frantically deploy the trolling motor, you make your first cast. Almost immediately after your bait hits the water, you feel the trademark “thump” of a solid keeper bass. After coming off of the front deck with a monster hookset, you realize that you may have jumped the gun and set the hook a little too early. All that remains on your hook is a 2-inch portion of your favorite soft plastic. No problem, you’ll just grab another one.

Here’s where the problem starts. You search endlessly for another pack of your secret color, but the bag is lost in the hundreds of soft plastic pouches in your boat. Before you know it, you’ve got every bag of soft plastics scattered on your front deck with your special bait nowhere in sight. It’s a problem that almost every angler has, and it wastes a lot of time on the water.

Simplifying soft plastic selection is something that can drastically reduce your amount of stress throughout a day of fishing. While plenty of soft plastics do, in fact, catch fish, there’s one bait out there that can be used in a plethora of different situations and catch some really big bass; the Zoom Ultravibe Speed Worm. Whether you like to flip and pitch, throw shaky heads, fish shallow or fish deep, this soft plastic will catch more fish than almost any bait in your boat.

Let’s face it; the Texas rig is the “old faithful” of bass fishing. On any lake throughout in nearly every condition, it’s always a safe bet to toss a Texas rig around. If you add an Ultravibe Speed Worm to this time-tested rig, however, you’re dealing with a deadly weapon. The ribbed body and Ultra Vibe Tail of this bait make it an ideal selection for nearly all Texas rig applications. As the bait is dragged along the bottom, it emits a tantalizing “thumping” sound that triggers the predatory instincts of big bass.

When using this bait with a 3/16-ounce weight, we like to target shallow cover such as laydowns, grass lines and docks in less than 6-feet of water. With a subtle entry into the water comparable to that of an Olympic diver, the Ultravibe Speed Worm can be casted in close proximity to the bass without spooking them. As you drag the bait, you can feel the tail thumping along the bottom and often times when you feel the tail stop thumping, it’s time to set the hook.

Yes, we know. A lot of bass fishermen abhor even the slightest thought of throwing a Carolina rig to catch bass. While it may not be the most entertaining fishing technique out there, it is notorious for catching some gigantic bass. The Ultravibe Speed Worm is a perfect complement to the C-rig, as its smaller, non-threatening profile tempts even the most suspicious bass.

As the water continues to cool, use a long, 5-foot leader with the UV Speed Worm rigged on a 3/0 Gamakatsu Offset EWG Worm Hook. Because the Speed Worm makes its way through cover with ease, don’t be afraid to throw it in some of the thickest stuff you can find. While many other soft plastic baits pick up crud on the bottom while Carolina rigging, this bait’s small profile makes it ideal for areas with thick, snag-inducing cover.

The shaky head is a great way to catch numbers of bass, but many anglers fail to recognize its ability to catch big bass. This misconception is often due to the angler’s choice of soft plastic. While a lot of folks prefer to use small, finesse worms on a shaky head, the UV Speed Worm presents the bass with a different, bigger profile than they’re used to seeing. In many times of the year, a larger bait can definitely catch bigger fish.

When an Ultravibe Speed Worm rigged on a shaky head is at rest on the bottom, the cut tail floats, causing it to sway back and forth with the motion of the water. Although it may seem as if it’s not doing much, every time water passes by the tail, it emits that special thumping sound that bass love. Upon closer inspection of the UV Speed Worm, you will also notice the tail’s resemblance to the pincher of a crawfish. As the tail floats, we believe that bass often mistake it for a threatened crawfish, triggering their predatory instinct to strike. For this reason, we like to throw the UV Speed Worm on a shaky head anywhere around deep rocks in order to key in on specific crawfish habitat.

If you ever find the bass feeding heavily on crawfish, you need to have an Ultravibe Speed Worm on your front deck. 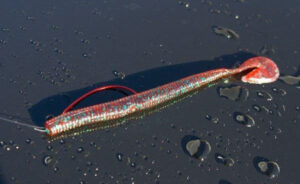 Perhaps the most popular application for the Ultravibe Speed Worm is for shallow, weightless fishing. With its uniquely shaped tail buzzing across the water’s surface, it is well known for producing huge bass throughout the early summer months as the bass inhabit the shallows.

Rigged weightless on a 3/0 Offset EWG Worm Hook, anglers are allowed to fish this bait both quickly and slowly atop the water with ease. Because the UV Speed Worm sinks slowly, it is ideal for all shallow water applications. We have enjoyed a lot of success swimming, or “buzzing”, the worm across thick lily pads and matted grass. As the bait nears an opening in the matted vegetation, simply slow your retrieve in order to draw some acrobatic, monstrous strikes. Remember to use a sweeping hookset in order to ensure a solid hookup with the fish.

With a small 1/16-ounce weight, the UV Speed Worm also gives angler the opportunity to wake the bait just below the surface. We have experimented with this technique in grass-heavy lakes such as Lake Seminole and Guntersville with outstanding results.

There are endless ways to fish with the Zoom Ultravibe Speed Worm, making it the perfect all-around soft plastic to keep on-hand at all times. Regardless of the time of year or water depth we’re fishing, we always have a bag of UV Speed Worms close by.

If you’d like to grab a few packs for your next trip to the lake, head over to TackleWarehouse.com. At just $3.59 per 15-pack, you’ll be able to stock up on all of your favorite colors.