The shaky head is a rare beastâ€”most anglers either absolutely love it or despise it. While its existence in bass fishing has been obscured by its perceived inability to catch big fish, anglers around the world have been consistently winning tournaments with it for years. For those days when the bass prefer a small appetizer instead of a full-course meal, knowing how-to fish a shaky head well can improve that day’s fishing.

Over the years, we’ve experimented with several different shaky head presentations. Although it’s difficult to fish a shaky head wrong, a few intricacies will improve your ability to catch more fish during those tough days on the water.

The name “shaky head” fools many anglers. Although the name implies that you should shake your arm out of socket, don’t fall into the “one-retrieve” trap. Dragging a shaky head along the bottom often yields better results.

It’s no secret that bass fishing in the fall can lead to some of the most memorable moments in an angler’s life. As bass, both spotted and largemouth, group up on primary and secondary points in search of big balls of bait, it can be difficult to find an area where you can’t catch fish. This time of year can be a double-edged sword, however, as autumn produces some nasty cold fronts, often making fishing extremely difficult.

During these post-frontal days, dragging a shaky head often proves best. Once bass move up on secondary points, they usually won’t stray far, if at all, when then front hits. Although they won’t always eat crankbaits and big jigs, they are rarely timid when it comes to crushing a shaky head.  Dragging a shaky head allows anglers to cover more water while also feeling for specific bottom compositions. Instead of dead-sticking a worm in these areas, briskly drag a shaky head to quickly and efficiently locate fish.

If you don’t get a bite in the first ten casts, simply leave and continue the search elsewhere. When implementing the dragging technique, you can hit dozens of areas while making mental notes and waypoints on your GPS device, allowing you the opportunity to hone-in on the most productive areas. This also makes dragging a shaky head an outstanding technique to use when practicing for that big weekend tournament.

Although it sounds as if we’re splitting hairs with this, there is a huge difference in shaking a shaky head and hopping a shaky head. Differentiating your presentation from what the bass see every day usually leads to more bites and catching those bigger, more educated and conditioned fish.

Whenever a full moon is present, fishing during the day can be tougher. As the fish feed for longer throughout the night, they become less apt to feed aggressively during the day. When the bass are a bit sluggish during these times, hopping a small finesse worm on a shaky head can trigger reaction bites that bulkier, more imposing baits cannot.

In addition to the lethargic bass activity during the day of a full moon, crawfish activity increases. As crawfish emerge from their dark dwellings, they will hop around rocks in search of food. As they dash and dart, they emit a very distinctive “clicking” sound that is unmistakable to a big bass. Hopping a shaky head around hard cover emulates this sound, giving anglers an opportunity to fool otherwise wary bass.

When implementing this presentation, it isn’t necessary to rip the shaky head. Beginning with your rod tip at a 3 o’clock angle, twitch upward to a 1 o’clock position to trigger reaction strikes. Crawfish aren’t Olympic high jumpers, so hopping the bait too aggressively can appear unnatural to surrounding bass.

Anglers must watch their line with this presentation, as there isn’t a quicker way to lose a fish than twitching your rod tip upwards when a bass already has your shaky head in its mouth.  To combat this, be sure to let your bait fall on a semi-slack line while watching for any jump in the line. If you notice any movement whatsoever on a slack line, it is important to set the hook immediately.

We know it sounds fairly obvious, but shaking a shaky head along the bottom of your favorite fishery is an outstanding way to catch a lot of fish. Knowing when and where to do so will yield the best results. Let’s draw a quick parallel to human behavior for a better understanding of this presentation:

Growing up, we all had those kids in our classes that would do anything to bother their fellow classmates. The absolute worst is when that classmate would put their index finger right in front of your face while doing the “I’m not touching you” routine. Eventually, most of us would get frustrated and swat their hand away. Shaking a shaky head triggers the same hand-swatting impulse in a bass. If you shake and wiggle your bait right in front of a bass’ face long enough, it’s going to get mad and eat it.

For this reason, we’ve found that shaking a shaky head is most effective when you know bass are in the immediate vicinity. Whether you’ve found them on your Lowrance or you’re getting a bunch of short strikes with other baits, shaking that shaky head right in front of their nose is going to make them mad enough to eat itâ€”even if they’re not hungry.

When bass are in large concentrations on ledges, in ditches or off the end of a main lake point, this presentation will catch them. When you feel bass are roaming up and down a stretch, shaking a worm in place will give the bass time to wander in and find your offering before you move it out of their feeding zone. If you’re having trouble getting bites, don’t be afraid to switch your color or weight sizeâ€”sometimes the small things make a huge difference. Just remember to use small, subtle twitches of your rod tip while letting the bait do the rest of the work, as over-doing it can spook larger fish. 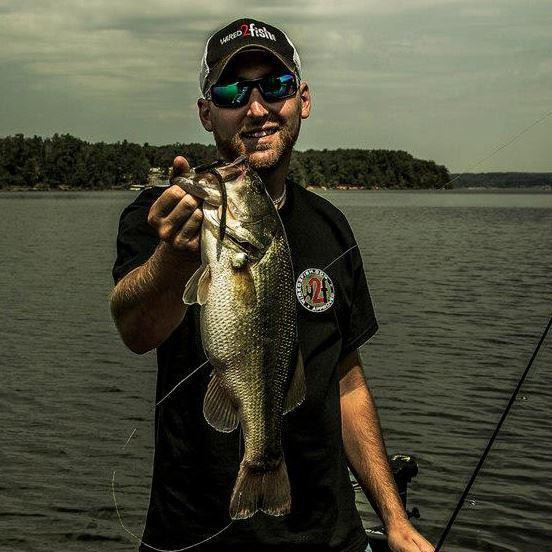 This is a presentation in which I’ve had recent success. Just as you would reel a Biffle Bug across chunk rock and other hard bottom compositions, swimming a shaky head can be a deadly approach around active fishâ€”especially spotted bass.

On cloudy, overcast days, bass do not position very tightly to structure. Instead of shading themselves from the sun, they will venture from surrounding cover in order to search for prey. As the bass begin to move more, it allows anglers to cover water with a plethora of moving baits. While bass see hundreds of crankbaits, jerkbaits and other moving baits throughout the week, how many times do you think they’ve seen a swimming shaky head? Again, it’s all about being different.

In order for the bass to get a good bead on your shaky head with this technique, a soft plastic with superior water displacement, like a Zoom Ultravibe Speed Worm, works well for me. For years, anglers have been using these kinds of soft plastic baits to fool big bass in shallow water, but they also work wonders in deep water as well.

Maintain bottom contact when swimming a shaky head. If you are unable to feel the bottom, simply changing to a heavier shaky head or a slower retrieve should help. Keeping your rod tip down and to the side will aid in the detection of bites, while also keeping you in position for a strong, sweeping hookset. While it will take a little practice to get a good feel for the bite with this presentation, it is important to stay vigilant and observant. During the hookset, make sure to reel until you feel the fish and sweep your rod to the side, just like a crankbait hookset. If possible, avoid any slack in your line.

Shaky head fishing can be one of the most versatile techniques in an angler’s arsenal. Thinking outside the box and trying different things can lead to some really fun fishing throughout the entire year. Whether you’re dragging, hopping, shaking or swimming a shaky head, it is an extremely effective technique for anglers of all skill levels.

More about how to fish a shaky head: