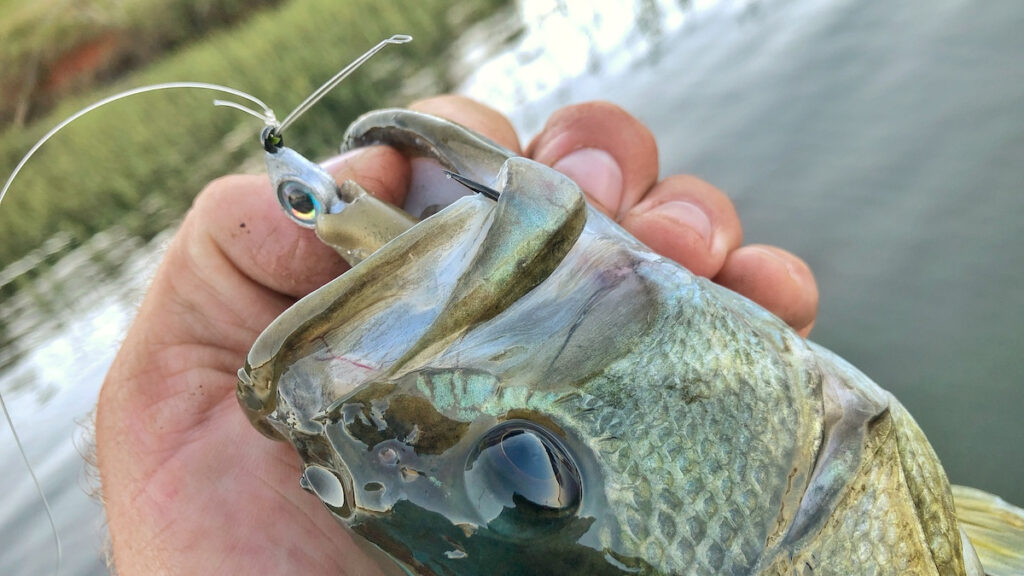 Single swimbaits catch fish year round but they are particularly effective in the fall. Whether you’re fishing open water for suspended fish or around fairly thick hydrilla, milfoil or water willow, you’ll find there are few baits better than a single swimbait as the temperatures start to cool down. The abundance of bait shallow and the subtle action of a swimbait creates the perfect marriage between technique and timing when trying to figure out what to throw in the fall.

If you’re fishing out in open water, rigging a swimbait on a jighead with the hook exposed is your best bet. But if you’re going to move to vegetation, it’s wise to transition to a weedless approach. You can either try a weightless or lightweight Texas-rigged swimbait to do this, which I have done often in the past. Or there are a few jig heads out now which are made to be weedless.

We’re going to look at one such jig head today, the Z-Man Weedless Eye Jighead. I spent some time testing this product out recently and was fairly impressed. This is the first time I’ve actually tried fishing a swimbait around vegetation on a weedless jighead and I found there are some particular advantages to fishing it this way. So let’s take a closer look at this jighead and dive into a little of what I’ve learned now. 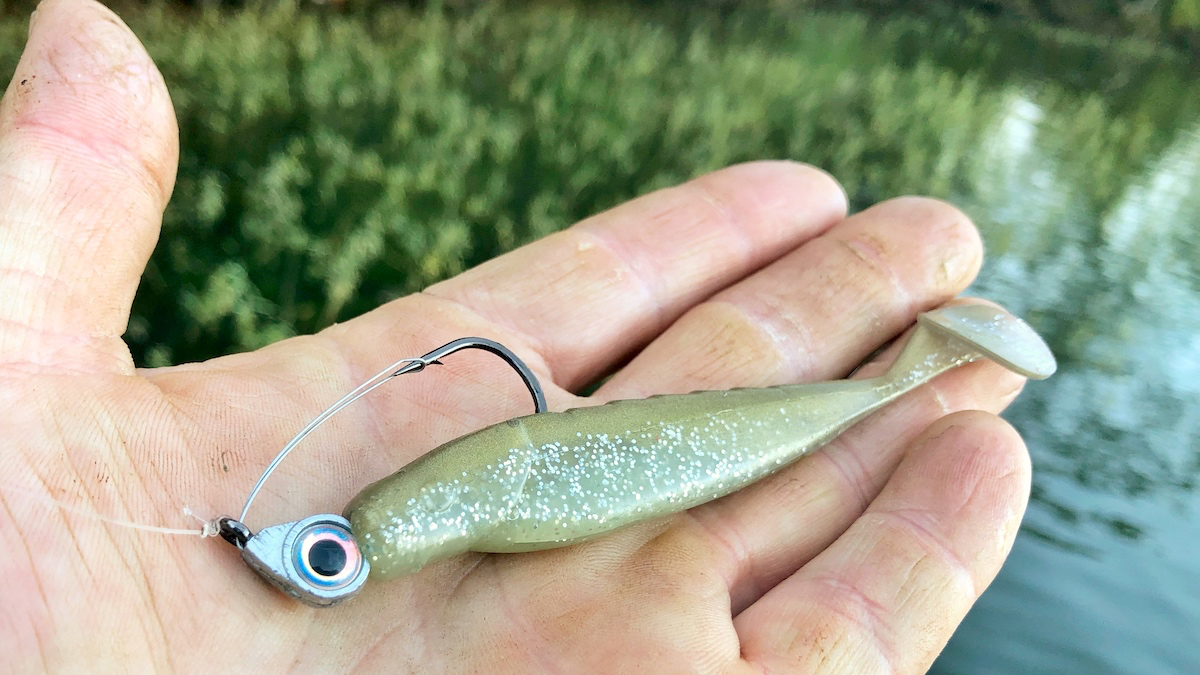 For starters, let’s look at the obvious difference maker between the Z-Man Weedless Eye Jighead and most other jig heads designed for swimbaits, that being that it is weedless. Z-Man incorporated a thin metal wire into the lead head of this product that comes out of the head, goes through the eye, makes a tight loop and then comes back through the eye and into the head. When you take this loop and bend it down to where it catches on the point of the hook, you’ve got a fairly weedless jighead.

Naturally if you throw it into super thick cover and start snatching on it, the little wire flexes on the obstruction and you’ll hang up. And that’s what you want it to do really if the obstruction is a fish’s mouth. You don’t want a weed guard like this to be so stiff that you can’t hook a fish. Instead, you’ll need to develop a feel for fishing it through cover and fight the urge to get trigger happy as you bump along in the vegetation.

Once you get a feel for it, the weed guard is stiff enough to make this a very weedless setup. But it’s also light enough that it still gets out of the way every time you do get bite and set the hook. So it’s a pretty good balance for what you’d want out of a product like this. I’d say on average I might have had the weed guard spring open and hook the vegetation on me once out of every 30 casts. And out of the 15 bites or so that I got on it I don’t think the weed guard cost me a single fish catch, though I did miss a few. But I believe those were on account of short-striking small fish. 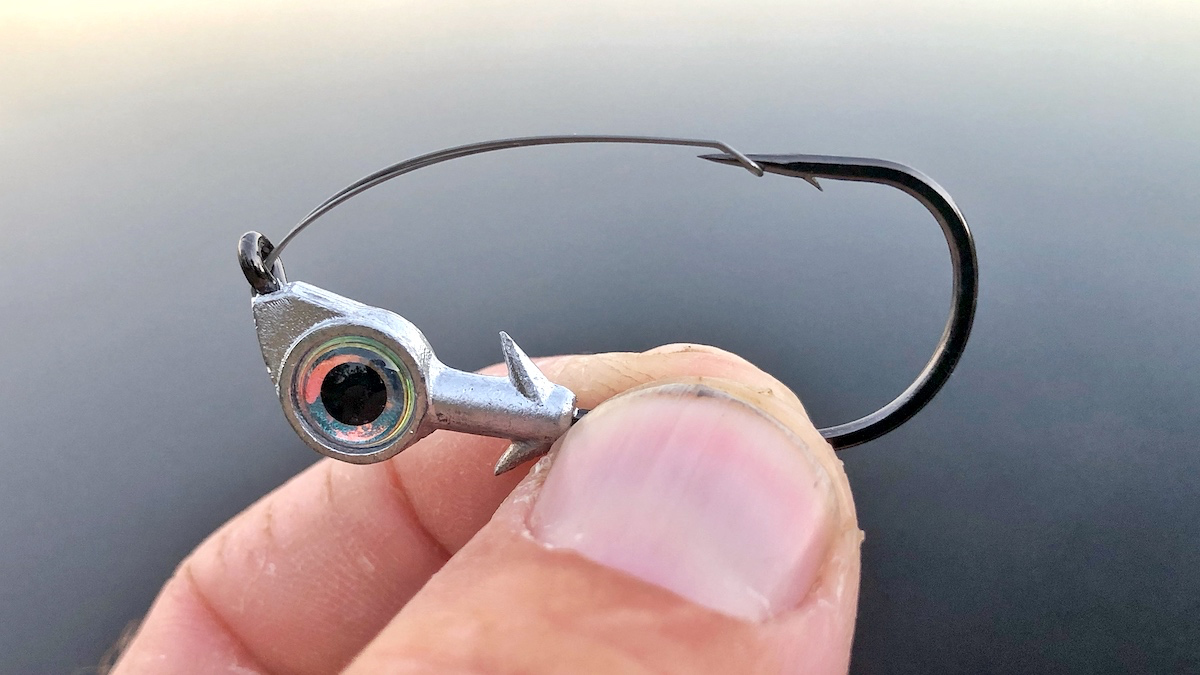 I really like the hook in this jighead. It’s a bold and strong hook, but still super sharp and not so thick that you can’t set it into a fish with 12-pound fluorocarbon. That’s about as light of line as I’d say you’d want to fish this on anyway. You’re typically only going to want to use this weedless version around vegetation, not out in open water. So you’ll need a little heavier line in case the fish pulls you down into the cover. And you could really even get by with braided line in some situations. The good news, the hook is plenty strong enough to hold up to whatever line you want to rig it on.

The head design is also pretty sweet. Z-Man put some magnum reflective eyes in this thing that catch a lot of light. I imagine the flash may help draw an extra strike or two and likely doesn’t hurt anything. But my favorite thing about the head design is that it is slender for its size. I believe that’s what helps this jighead stay up right so well. Ball head and wider jigheads are great for open-water scenarios because they exaggerate the wobble of a single swimbait.

But you don’t really want that when fishing around vegetation. The more your bait rocks side to side, the better chance you have to hang the cover. Your bait will come through the cover better if it stays more vertical with the hook pointed up. Though I haven’t had the opportunity to use this jig head around submerged hydrilla or milfoil yet, I believe this will be a great bait for it. I fished it mainly through sparse to fairly thick water willow and, for the same reasons, it worked extremely well. 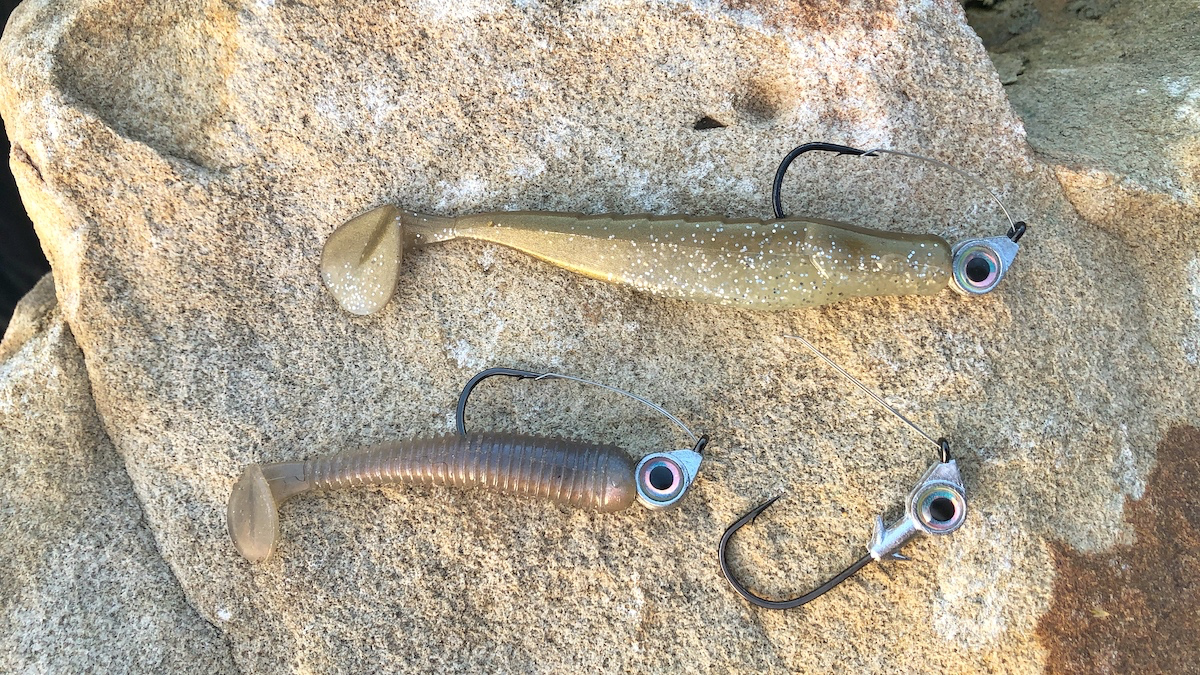 The bait keeper is also quite impressive on this thing. With a double barbed keeper, you won’t find many instances where your bait slips down the shaft of the jighead. Having to constantly re-rig a swimbait is one of the more annoying aspects of this style of fishing. Whether its from a hard cast, a fish pulling on the tail or a twitch of the rod intended to free the bait from cover, it seems like a swimbait is slipping off the bait keeper every other cast sometimes. Not the case with the bait keeper on the Weedless Eye Jig Head, that’s for sure.

My only critique is that the double-barbed keeper can be a bit much for the nose of some swimbaits. If there’s not enough material there, the big barbs can tear through the plastic while rigging. Adding a little moisture first does help the bait get up and over the barbs better. But after awhile, this seems to be the area where most baits will fail. Still though, I only went through two Missile Baits Shockwaves to catch around 12 fish. So those numbers are pretty good.

And I imagine Z-Man’s response to this would be to try their DieZel MinnowZ or one of their other swimbaits made with their super stretchy ElaZtech material that’s almost impossible to tear. Not a bad idea since it’s an outstanding swimbait and they likely designed this bait keeper with that material in mind, but rest assured this jighead will work with nearly any soft-plastic swimbait you prefer as well. 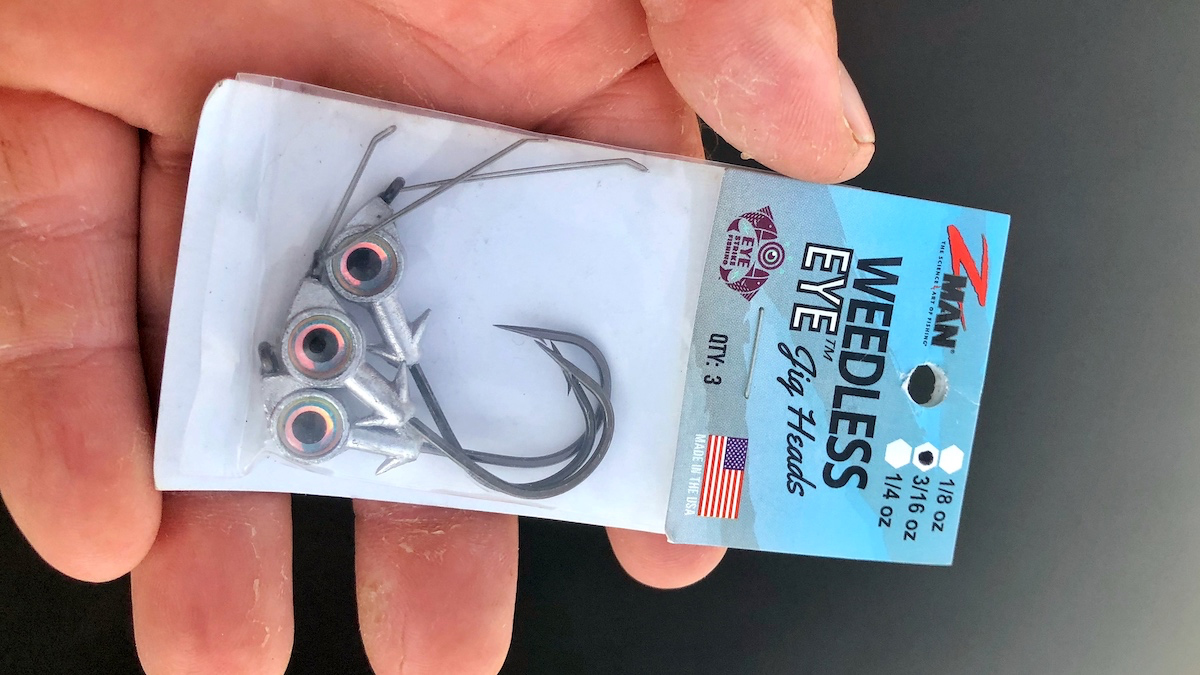 Available in five different eye colors and with three weight choices ranging from 1/8-ounce to 1/4-ounce, you have a pretty good variety of options in the Z-Man Weedless Eye Jighead. I’m glad I had the opportunity to review this product because it opened my eyes to a whole new rigging option for fishing swimbaits around vegetation. The weed guard does a great job keeping weeds off the hook but is still flexible enough to get out of the way on a hookset.

A three pack comes in at $6.99 so I’d say they’re definitely worth giving a shot if you’re looking for something like this. I’d recommend going with the 1/4-ounce if you’re wanting to fish down in submerged vegetation and the 3/16-ounce or even 1/8-ounce if you’re fishing through vegetation that’s higher in the water column or even sticking out of the water like the water willow I was fishing. Either way, because of the head design, this bait should stay upright and come through most anything you want to fish it through.

The Z-Man Weedless Eye Jighead is available at the following retailers: