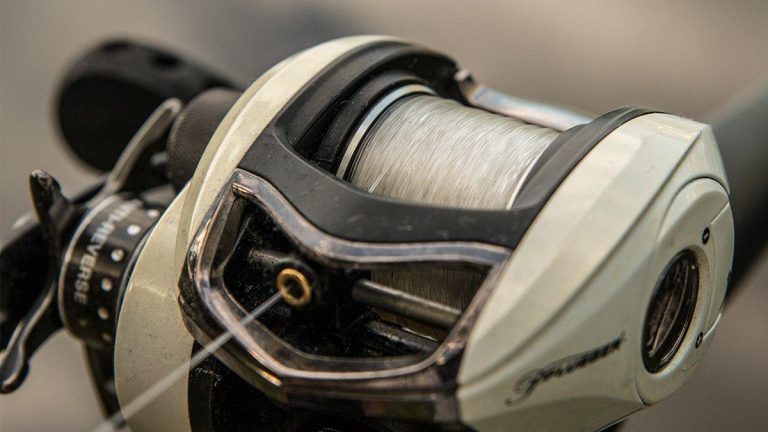 Fluorocarbon fishing line can be pretty darn expensive. Last year alone, I spent well over $600 on various diameters to get me through my tournament and guiding seasons. Because our fishing line is the most critical link between us and the fish, I actually factor fishing line purchases into my annual budget.

I’ve been hearing about Seaguar Red Label Fluorocarbon for several years. Several of my very successful fishing buddies swear by it; they won’t use anything else. When it came time for me to respool a few of my reels, I finally purchased a few spools for $14.99 to see what the hype was about. 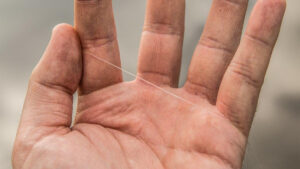 I’m a shallow-water power fisherman, so I put my line through a lot. All year long I’m making presentations in the nastiest cover I can find and when you combine that approach with close-quarters, high-impact hooksets, my line needs to hold up. Hence the reason my frugality tends to fall by the wayside when it comes to fluorocarbon.

Seaguar Red Label Fluorocarbon holds up very well in heavy-cover situations. I’ve used it for pitching jigs to gnarly laydowns, cranking shallow plugs through stump fields and even skipping lightweight shaky heads underneath docks and I’ve yet to have an issue with it.

Its tensile strength has exceeded my expectations for an inexpensive $14.99 fluorocarbon. I’ve pitched and flipped a lot of docks with Red Label and have made a concerted effort to set the hook as hard as I can. I’ve broken off one fish thus far and upon closer inspection, she had me wrapped around a rusty nailâ€”I don’t think any fluorocarbon could have succeeded in that situation.

In terms of abrasion resistance, Red Label isn’t quite as resilient as Seaguar’s higher-end lines such as InvizX, AbrazX and Tatsu, but it’s nothing that should cause you any lost fish along the way. As long as you get in the habit of checking your line after each fish catch or snag, you shouldn’t have any issues with break-offs.

I’ve also been using 8-pound Red Label Fluorocarbon for my leader when finesse fishing and it has performed flawlessly. It holds the knot very wellâ€”just make sure you wet your knot each timeâ€”and it has a bit more stretch than other fluorocarbons I’ve used. I actually like this for my leader line, because when it’s attached to a braided line with absolutely no stretch, the added shock absorption gives you a little extra insurance when it comes time to set the hook. 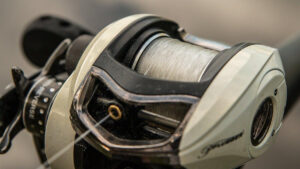 Whether or not a particular type of fluorocarbon “plays nice” on your reels can make a big impact on your fishing success. There’s nothing more frustrating that spending a large part of your day picking out backlashes.

Seaguar Red Label is actually a lot more manageable than I thought it would be. As with any fishing line, the larger the diameter, the more kinky it’s going to be on the spool.

With that being said, the 8, 10 and 12-pound sizes are comparable to some of the more expensive fluorocarbons on the market. I’ve experienced very few backlashes, kinks and loops on both spinning and casting gear.

The 15 and 20-pound sizes are a bit stiffer, but I’ve remedied their higher memory by using KVD Line and Lure Conditioner. I’ll spray about three sprays directly on my spool and let it sit for a few minutes before fishingâ€”it makes a considerable difference.

The 8-pound Red Label actually behaves pretty well on spinning gear. Most spinning reel line management issues are due to over-spooling, so stop just short of full capacity when you’re spooling up and you should have a good experience with this line.

Hard to beat the price 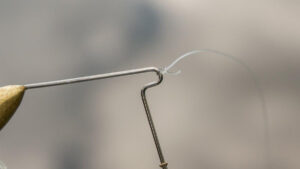 This line starts at $14.99 per 200-yard spool, which is an outstanding bargain. Budget-minded anglers will certainly appreciate not having to sacrifice quality for price.

In my opinion, a lot of anglers buy line based on price, but not exactly how you’d think. We’ll often be stuck between a few different lines and after some thinking, we just bite the bullet and get the more expensive stuff. It took me a while to try this line because I was in this exact same mindsetâ€”it can’t be good for such a low price, right?

As it turns out, this is a totally suitable fishing line that gets the job done.

Don’t be scared of this stuff. Seaguar Red Label is a good fluorocarbon line that will put plenty of fish in your boat. Just make sure to check your line for small knicks after each fish catch and I think you’ll have a good experience with it.