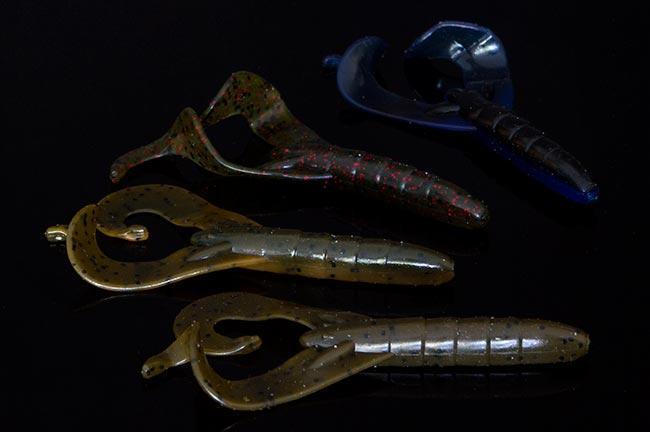 Soft plastic baits basically come in about 20 shapes. Sure there are a thousand varieties of those shapes, but the simple truth is creating a brand new shape that appeals to fish as much as it does to anglers is not an easy task. So we’re constantly experimenting with  the variations as new ones hit the market.

What we find is that some companies understand that how you make your plastic might be more important than how you shape it and package it. And some companies don’t. But we recently started fishing with one of those companies we think gets it. That’s due in large part that it’s basically ran by guys who make a living catching bass.

Bassmaster Elite Series pro John Crews has been using various manufacturers plastics for years. He finally decided that he never could find exactly what he was looking for in a bait and he had a lot of ideas how to make some shapes better but had trouble finding anyone that would make them. So he had them made himself. And thus Missile Baits was born.

Recently we’ve been throwing a jig a lot. Football jigs, flipping jigs and swim jigs have all been getting thorough workouts on our fisheries. As the water warms we look for trailers with good action as the bass get more aggressive. We found a new version of a twin tail trailer that works as well on a swim jig in 1 foot of water as it does on a football jig in 25 feet of water.

The Missile Baits Twin Turbo is 3 1/4 inches long and comes in 8 proven colors. The 8 pack of baits, however, will last through several bass as we found in our testing. I was able to catch 8 to 12 bass per trailer most of the time. Occasionally I would have a leg get pulled off in a wrestling match with a chunky grass bass with those sharper than usual teeth. But for the most part I was getting a lot of bass on each trailer.

While the durability was good on the baits, what we’ve liked most about the Missile Baits in general is they formulated a soft plastic that makes their plastics look very lively in the water. The same was true for the Twin Turbo. On a steady retrieve with a swim jig we could see the legs kicking and putting off a nice displacement. We were mimicking bluegill recently up in Northern Minnesota with swim jigs and the Twin Turbo proved to mimic bluegills well.

When a trailer got torn at the head, we would bit off about an inch of the trailer and just nose hook it on the jig and let it sort of swing back there instead of threaded up the shank. The bass didn’t seem to mind at all. In fact we may  start rigging it this way more often. 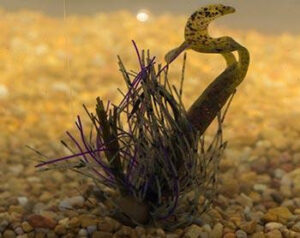 We really liked the Bammer Craw and Fishalicious colors for swim jigs that mimic bluegill and shad respectively. We also liked Green Pumpkin and Watermelon red on football jigs. The Golden Amber was a good color up north. And Cinnamon Purple and Bruiser will be good alternatives we’re sure.

The baits come 8 to pack and retail for $3.99. But they seem to hold up well so you’re talking about 60-80 bass probably per bag depending on the situation.

The head and neck section is pretty narrow so you may have some issue threading them on jigs with real big keepers. You can see on our football jigs, they fit fine as did they on swim jigs. We occasionally take about 1/4 inch off or cut it at the first segment to make it snug up a little tighter to a skirt collar on a jig.

A twin tail is a stable for both shallow and deep jigs and we found the Missile Baits Twin Turbo to be a pretty good one. To see the colors or pick up a few packs, click here.