Truth be told, I almost gave up on smaller paddle tail swimbaits. A large majority of the ones I’ve used never impressed me—I could never see what the hype was about. They’d slowly roll back and forth and if you’re lucky, the tail would decide to kick every now and then. I might as well have been straight-reeling a stick worm.

I’ve had a chance lately, however, to play around with the Missile Baits Shockwave and it has restored my faith in the small swimbait. It has incredible action, it stays intact for a bunch of fish catches and it doesn’t cost you your firstborn.

Get this—the Missile Baits Shockwave is a swimbait that actually swims. Regardless of the way you decide to rig it, you’ll be thoroughly impressed by its incredible swimming actions. 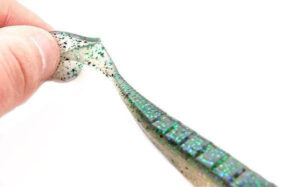 The section of this swimbait that connects the paddle tail to the body is extremely thin and flexible, giving the Shockwave’s tail the chance to do its job. Whether you’re slow-rolling it on a heavy jig head or burning it over shallow grass flats, the tail kicks like crazy and entices some ridiculous reaction strikes.

When you hold the Shockwave between your fingers, you can feel the tail continuously vibrating with even the smallest movement of your hand. After a lot of experimentation in clear, shallow water, this characteristic also holds true while in the water. Even the smallest twitch of my rod tip made the entire bait quiver and as it falls on slack line, the paddle tail continues to kick.

Pliable soft plastic baits are usually frail and expensive. A few short strikes or even a little interest from nearby bream can ruin countless bags of these plastics and render them totally useless. I avoid baits like this when I’m fishing—I’m not a fan of spending a bunch of money on baits that won’t last. I’ve never understood it.

When I first noticed the action of the Shockwave, I was a little concerned about its durability. It had one of the best actions I’ve ever seen in a swimbait, but would it stand up to abuse?

As it turns out, my concerns weren’t necessary because this dude is built like a tank. It stays on the hook extremely well throughout the day, it holds up impressively to short strikes and it stays intact throughout many fish catches. You’ll notice a few teeth marks after three or four fish catches, but they don’t compromise the integrity of the bait.

Throughout my testing of the Shockwave, I realized that its unique action makes it a very versatile tool that can be used in countless scenarios and applications. I’ve had a lot of success fishing it weightless, on a jig head and as a bladed swim jig trailer. I don’t screw around with the castable umbrella rig stuff, but I can imagine this would be a deadly swimbait choice for it.

I’ve had most of my success fishing the Shockwave slowly. Of course the water has been a bit cooler in my area this time of year, but I think the real reason is due to its awesome action on the fall. Whether I have it threaded on to a bladed swim jig or simply Texas rigged with a small weight, the Shockwave quivers excellently while falling on slack line. When I noticed this, I stared fishing it very slowly and letting it fall into the holes of laydowns, submerged vegetation and brush piles with outstanding success.

Swimbait fishing success can actually be very dependent upon your color choice. In every other bass fishing situation, I keep my color selection extremely simple, but in clear water I am much more deliberate when choosing soft plastic colors.

When you grab a Shockwave from the pack, you can expect it to look exactly like every single one in the pack. There are no color inconsistencies whatsoever—the fleck is the same and the base color patterns are identical. You don’t have to dig through the pack looking for the “right” color shade or the right fleck pattern—just pluck one out and get back to fishing.

There are a lot of swimbaits out there that are ridiculously priced, but the Shockwave is priced at an affordable $3.99 per 5-pack. Remember, you’re going to catch multiple fish on each swimbait, so this is a great value in my opinion. This low price point isn’t indicative of sacrifices in quality, either—these are very well built swimbaits that last.

If you’re looking for an incredible swimbait that catches big bass, holds up to abuse while giving you more versatility, I absolutely suggest checking out the Missile Baits Shockwave.

The Missile Baits Shockwave is available at TackleWarehouse.com.