I’ve been on a mission for the past few years to find unique topwaters lures I can use on my local lakes. These lakes have a bunch of bank grass and lots of bass, but there’s one problem – everybody and their mother casts a frog to ’em and the fish are getting pretty darn smart about about it. I want to use something different that the bass might not have seen yet.

My search eventually led me to the Lunkerhunt Propfish Sunfish. I had been seeing some great-looking topwater options from this company for a while and this particular lure won “Best Soft Lure” at the 2017 ICAST show, so I decided to grab a few and put them through their paces. The results were really impressive and I think this is going to be a really solid option for anglers aiming to catch those big, pressured bass.

I’ll explain exactly what I’m talking about in the next few slides. 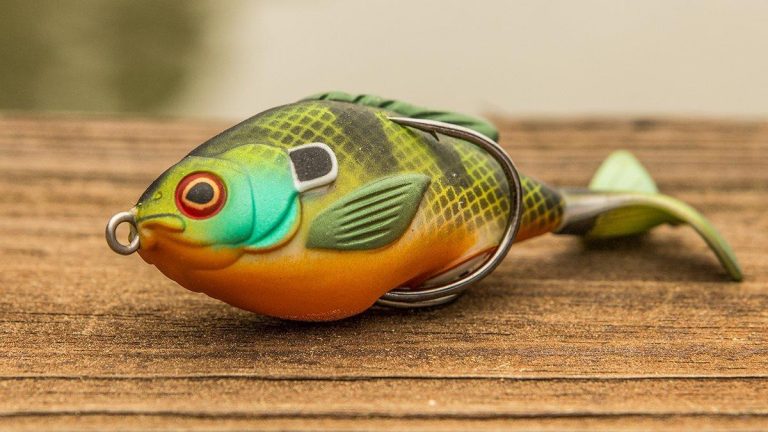 The Lunkerhunt Propfish Sunfish almost perfectly matches the size of the bluegill and other small sunfish that bass like to eat. When I’m looking for prime bluegill bedding areas, I’ll actually bypass the beds that are being used by the bigger and older ‘gills. The bass in my area seem to focus heavily on what I call “three-finger bluegills”. If you hold up your index, middle and ring fingers together, that’s usually the size I’m looking for. These younger bluegill haven’t quite figured out the predator/prey relationship yet and in my experience, make an easier meal for a nearby largemouth.

This bait measures 3 1/4 inches and weighs 1/2-ounce, so while it does imitate those smaller panfish, the weight of the Propfish Sunfish allows for super long casts on braided line. This has been very helpful lately, because I’ve been able to keep a healthy distance from these skittish, cruising largemouth bass and make a pinpoint presentation.

What to expect on your first cast

When I first started using the Propfish Sunfish, its action took me by surprise. I was expecting the rotating tail to cause more of a commotion in the water, similar to traditional prop baits, but its actually quite subtle. After a few days of fishing with it, I learned that this lure is most effective in calm water because of its subtle action.

It floats on the surface while at rest, but as you reel it, the tail will quickly spin about 1/16-inch underneath the surface which causes the body to have a very subtle wobble to it. Both the rotating tail and the wide nose put off a nice bulge and move a surprising amount of water. It looks strikingly similar to those spring and summertime bluegill that like to move high in the water column.

I have had most of my bites reeling this bait very slowly on the surface. If you’re targeting small strike zones, however, I’ve figured out that you can twitch it like you would a hollow-bellied frog and the tail will spit a bit more water than normal. 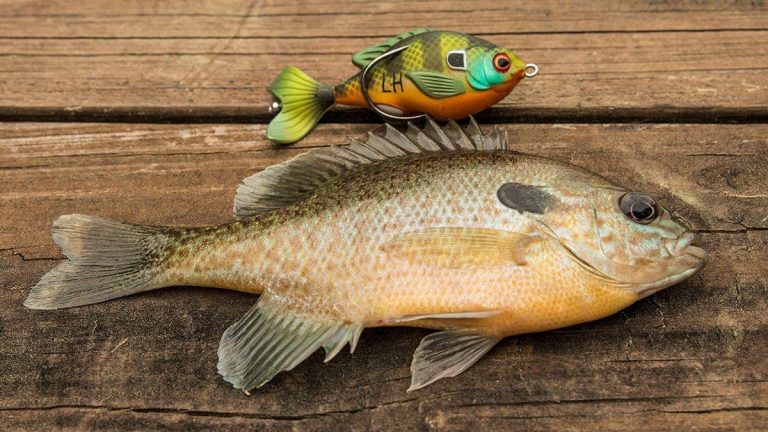 The color options of the Lunkerhunt Propfish Sunfish will catch plenty of bass throughout the entire country (you can see the colors here). I prefer more natural colors in my area, so I’ve taken a special liking to the bluegill and green sunfish colors in high sun, while I have caught some nice ones using the “Stealth” pattern on overcast, rainy days. This bait will get some teeth marks on it, just like any hollow-bellied frog, but the colors stay intact after lots of fish catches.

I’m a big stickler for sharp hooks and throughout my tests, the Lunkerhunt Propfish Sunfish passed with flying colors. I’ve been laying the wood to ’em with 60-pound braided line and I have not had any hooks bend, warp or roll whatsoever. With most of the bites I’ve had, I’ve actually been able to watch the bass “wake” towards the bait from up to six feet away, so that tells me there’s something enticing about it. I’ve caught about a dozen bass so far and have landed each of them.

From the bass’ viewpoint

Because you’re usually going to cast past your target and retrieve the Propfish Sunfish towards it, this is what I figured a bass sees as it’s encroaching on their territory. The eyes, gill plates, colors and overall profile of this bait is a great sunfish imitator. The hook points are also tucked beneath the dorsal fin, which makes this an incredibly weedless option when you’re fishing bank grass. The body is quite soft and collapses excellently, which is a big help to your hookup ratio. 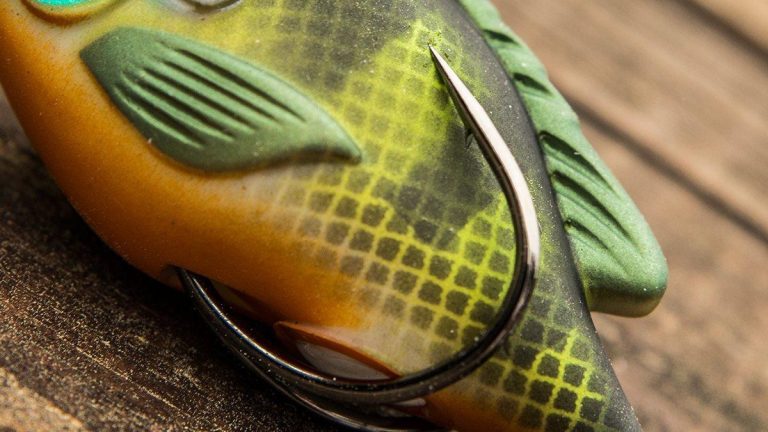 If you want to show your local bass something a little different this year, I’d definitely recommend giving this bait a try. I’ve had a great time with it so far and I think it might be a big-time seller around much of the country.