I’ve reviewed a few crankbaits lately and feel like there’s only so much you can say about a crankbait. There are really only a couple characteristics a crankbait needs for me to give it a fighting chance. To be honest, the only one that’s a real deal breaker is if it doesn’t run straight right out of the box. Otherwise, I’ll give it a shot.

Next in line would be hooks. I prefer the bait come with a good set of hooks but really even this isn’t a deal breaker since I can swap them out. Then there are a few assumed qualities I guess that I don’t even think about, like the bait being durable with a good finish so the paint holds up and you don’t have to worry about something random happening like the bill breaking off. But a lot of crankbaits these days live up to that basic standard.

With all of that being said, there are certainly subtle differences between almost all crankbaits and there are a few things a company can do to really elevate a bait’s status in my opinion. Let’s look at some of the basic things Duel Hardcore does right with their Crankbait 4+ and some of the things that move this bait up several tiers.

The Duel Hardcore Crankbait 4+ comes with a good set of hooks. They’re sharp and strong, definitely not the throwaway hooks that some baits come with. I do prefer a shorter shank, wide-gapped hook on a squarebill or lipless crankbait but for deeper diving crankbaits like this I typically go with a longer shank, round-bend hook much like what the Duel Hardcore Crankbait 4+ comes with.

Reason being, when a fish bites a more compact squarebill or lipless, it has a good chance of inhaling the whole bait or at least getting more of the bait in its mouth than it will with a longer deep-diving crankbait. So the short-shank, Triple Grip-style hooks are better for those baits as they let the fish suck the bait in before hanging into the fish. Though there are some fish that can inhale a larger deep diving crankbait whole, typically the fish will just slap at the bait, so the longer hooks with a round bend increase the odds of you hooking up with your prey.

Runs true with a tight action

The Duel Hardcore Crankbait 4+ runs straight right out of the box, which is critical for me to be able to get behind it. You can tune a bait if it isn’t running straight but it’s a tedious and time consuming ordeal so you’re just better off starting out straight. This bait can blow out to one side or the other if you just absolutely burn it on the initial decent but the angle and design of the bill help the bait dig deep quickly so there’s no need to burn it down to the bottom anyway.

The bill design also creates a nice, tight wiggle instead of a really wide wobble. It’s not as tight as something like a Shad Rap but it’s pretty tight compared to other crankbaits close to its size and depth range. That action stays consistent until the bait reaches its max depth range of 12 to 14 feet, roughly 4+ meters which is where Duel Hardcore derives the name for this crankbait. If the bait can make contact with the bottom or cover in that range, it has some nice deflective characteristics.

This is something a few companies have started adding to their baits over the last few years and a feature that definitely sets those few crankbaits apart from the other 10- or 12-dozen out there. Duel Hardcore incorporated a weight transfer system that loads a tungsten ball into the tail of the bait on the back cast to help the bait cast farther by keeping it headed out tail-first in the optimal aerodynamic orientation.

When the lure hits the water, the ball rolls back to a magnet in the bait’s belly and locks in for the retrieve. This ensures consistent action and a good bit more range. The company claims the bait will throw 30 percent farther than some other baits. I’m not sure exactly what that number would be but based on my personal experience you really can bomb this bait out there, even in the wind. And it does throw farther than some other baits in its size category. 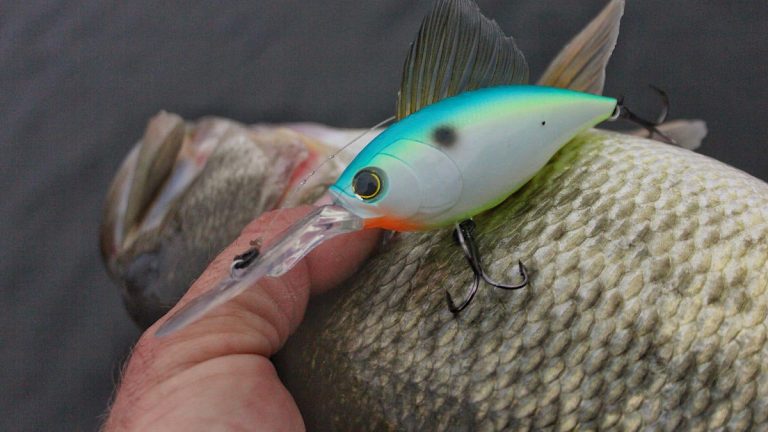 The Duel Hardcore Crankbait 4+ is a well-built fish catcher. It comes with a quality finish in several productive color schemes. The components and materials used to create the bait are solid, from the bill down to the hooks. A true-running crankbait with a nice wiggle, the Crankbait 4+ really moves itself up a tier with its Magnetic Weight Transfer System. With fish more wary now than ever before, being able to cast an extra few feet can be a difference maker at certain times of the year. And you certainly gain that advantage with this bait.