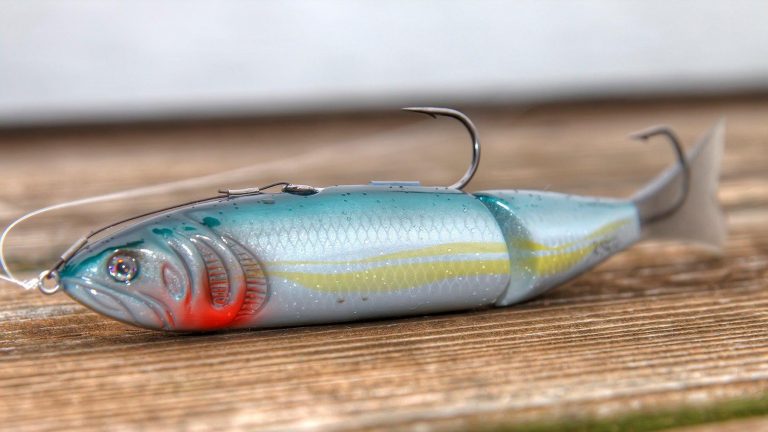 As fishing lures have evolved, building a better trap for the predator became more difficult. There are still new innovations every year from proven companies in fishing tackle manufacturing. One of those new technologies came to my attention last summer from a company out of Japan.

A close friend in the industry confided in me last year at ICAST and handed me a mysteriously wrapped lure to take home and “play with” as he put it. When I got to my room, that evening, I unwrapped a new glide bait called a Kotetsu from the company Kaesu out of Japan with the moniker of Extreme Lure Factory.

The Kaesu Kotetsu looks like a medium to smaller sized glide bait. But it’s a lot more than that.

My anonymous source told me, “you won’t appreciate it, until you get it in the water and watch it move. Then you will think to yourself, ‘why didn’t I think of this.'”

The Kotetsu has an uncanny neutral natural buoyancy not found in many lures. It gives it a very natural movement. You can make it work with the slightest of movements of your reel handle, rod tip or just slow steady reel. 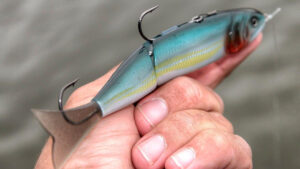 The beauty of this unique glide bait comes from it’s artificial wood that they call Chemical Wood. You can’t achieve this action with styrofoam or natural woods so they use this specially created material. It’s this material that puts this bait somewhere between a jerkbait and a glide bait or maybe the best of both worlds in one bait. It ever so slowly sinks but maintains a very natural posture. It will move and saunter along very naturally both in sound and movement.

Then there is an extremely unique hook system that gives the bait a real mass appeal. There is a top hook secured by a sleeve and a wire. When a fish is hook the sleeve pops out of its cavity and now you are fighting the fish on a direct hook to the line tie. No bait in between. Now the back hook is also extremely unique as it’s built to pivot 360 degrees so that the fish loses its leverage and also so the tail itself won’t tear up as easily. 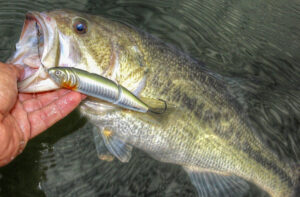 These are very ingenious designs.

My first outing with the swimbaits was on a clear private lake. I wanted to fish it somewhere I could watch the lure constantly and understand what different rod and reel combinations did to the action.

I was literally playing with the action making it dart along the shoreline in late summer when a shadow appeared to be follow off to the right of the bait. I made it dart and turn back toward the fish with my rod. I then let it just sit. I gave it a slight twitch to right it back on course and the fish charged ferociously. Now I had a 7 or 8-pound bass on 12-pound line with about 10 feet of line out. Not an ideal situation for any lure or angler. 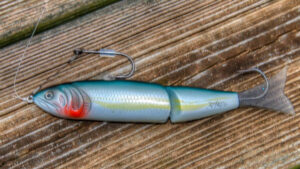 In my mind, I’m replaying, “you’re the only one I’ve given this to so no one else even knows about it much less has one.”

I panicked. I gave a half hearted pull, knowing I’ve got no room to fight and a hard hookset is going to break off maybe one of the only lures stateside. I stuck the fish. It turned for deep water. Made a hard charge. I mashed my button quick and fed line under my thumb tension. The fish pulled off.

I had not even really begun to fish the lure, and I already had a giant bass try to take it away from me. It was pretty exhilarating and nuts to say the least. One of those, wish I had a GoPro on my head moments so you could see what I saw. 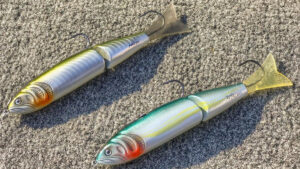 I now have two of the Kotetsu glide baits. One in Green Back Shiner and one in Natural Sexy Shad. I’m dying to fish some clear waters again with these baits. Maybe on a bit heavier line this go around. I’ve been playing around with them while jerkbait fishing this winter here at home. I’ve managed to land a few quality bass already, but I think they are really going to shine in the coming months. 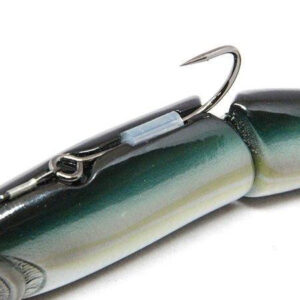